1748 Vaugondy Map of the County of Tyrol, Italy and Austria 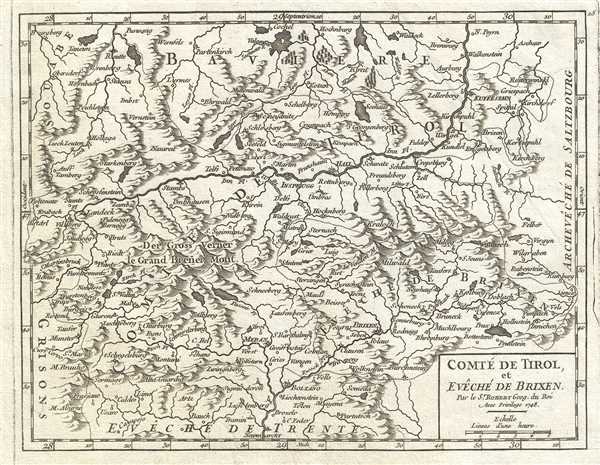 1748 Vaugondy Map of the County of Tyrol, Italy and Austria

This is a beautiful 1748 map of the county of Tyrol in modern day Italy and Austria, by Robert de Vaugondy. It covers this historic region from Landeck east to Kuffergasse and south as far as Trento in Italy. It includes the modern day countries of Austria, Italy and Liechtenstein. The entire region is depicted in extraordinary detailed, offering both topographical and political information, with forests and mountains beautifully rendered in profile.

Originally a state of the Holy Roman Empire, the County of Tyrol became a province of the Austrian Empire in 1814 and was later a part of Austria-Hungary. The region was divided between Austria and Italy after World War I. This map was published in the 1748 edition of Vaugondy's Atlas Portratif Universel et Militaire.