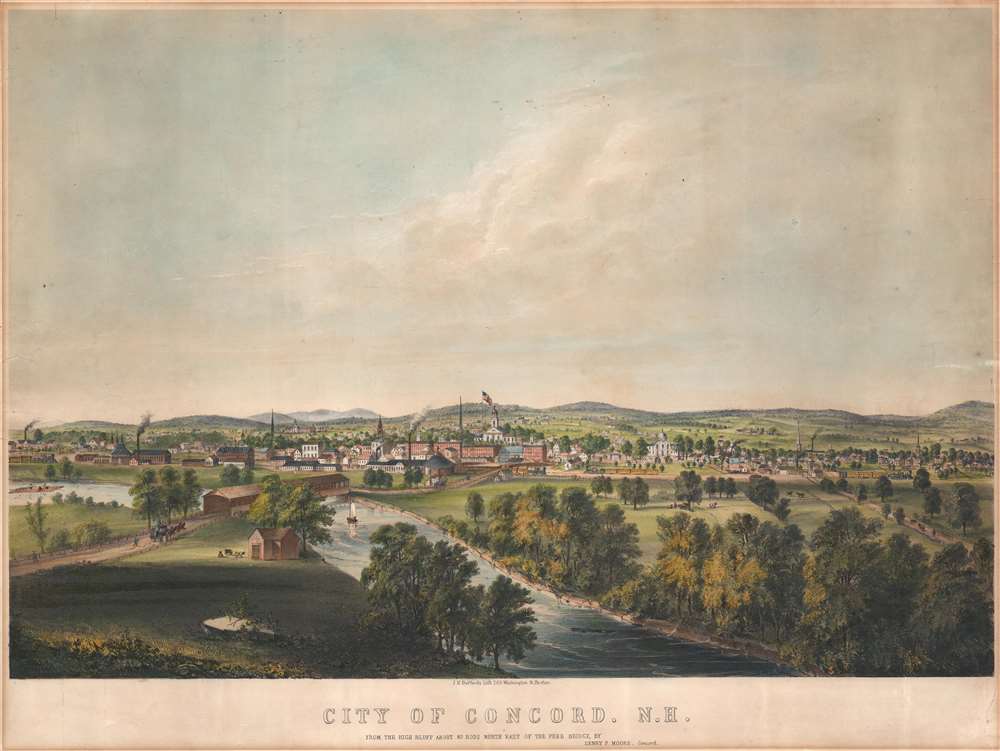 This is a rare 1855 Henry P. Moore / John H. Bufford bird's-eye view of Concord, New Hampshire. The view looks on Concord from a high point to the east, across the Merrimack River. The former covered bridge, what is now Loudon Road, crosses the Merrimack to intersect with the train station. Several churches and the old city hall are evident in the mid-ground, while in the background, the rolling foothills of the White Mountains are just discernible. Several smokestacks and large mills hint at economic prosperity despite the idyllic setting.

City views were being produced in the United States as early as the 1830s, but the genre exploded after the American Civil War (1861 - 1865). Bridging the gap between maps and pictures, most 19th century American Bird's-eye views presented cities to the public from high vantage points. Some were imagined, but others were drawn from hot-air balloons or nearby hills. The presentation, combining high elevation, commercial interest, and new printing technology created a uniquely American art form, as described by historian Donald Karshan,

This map was engraved and lithographed by John H. Bufford based upon a painting by Henry P. Moore. It is rare. Reps notes holdings in five institutions. We note an additional example at the Library of Congress and one in private hands.

Henry P. Moore (June 1836 - 1911) was an American landscape artist and war photographer active in Concord, New Hampshire and, during the Civil War, in Hilton Head, South Carolina. Moore was born in Goffstown, New Hampshire, but grew up in Concord, which he learnt photography. During the American Civil War (1861 - 1865) he followed the New Hampshire 3rd Regiment, photographing events as they happened - particularly in Hilton Head, where Union Troops were stationed. His war photographs are noted for both their masterful composition and historical significance. Learn More...