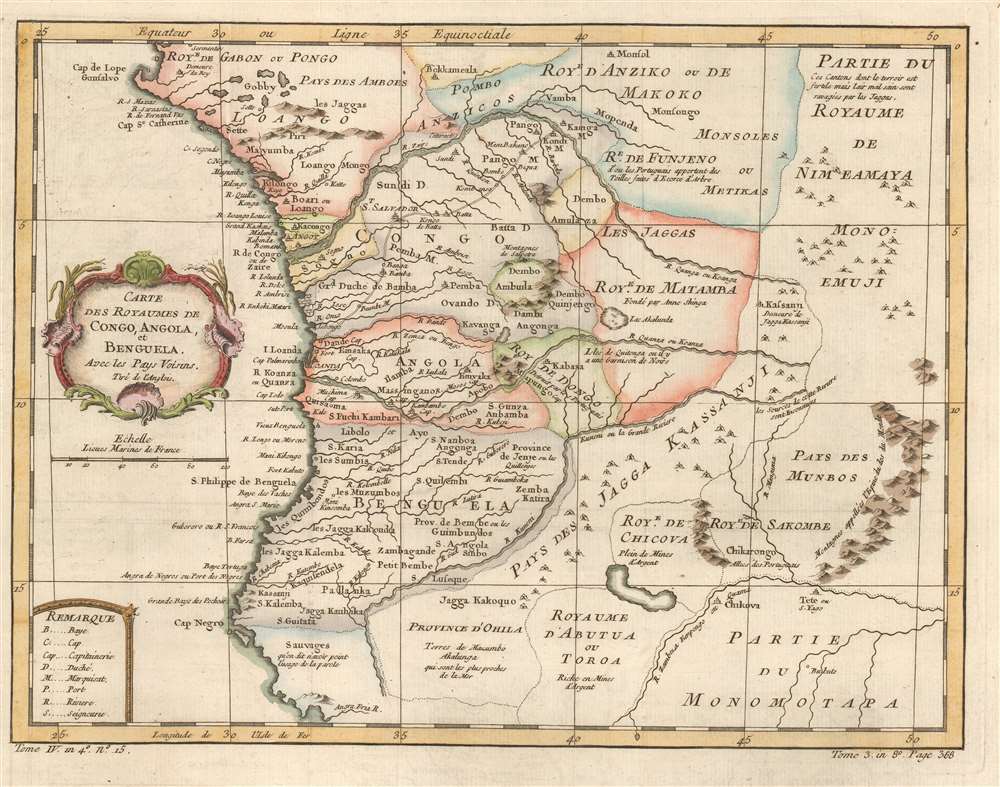 This is a 1780 Jacques-Nicolas Bellin map of west-central Africa. Focusing on the kingdoms surrounding the Congo River, Bellin provides a snapshot of Portuguese colonial dominance in the region. Numerous towns and villages are labeled, some of them Portuguese, some of them African. Short comments provide some information where it was available, such as, concerning the Royaume de Dongo, 'destroyed by the Portuguese.' Or, just below Benguela, where savages or sauvages apparently live, 'it is said that language is not used here.'

Many of these kingdoms were important states in early-modern Africa. The Kingdom of Ndongo (also known as Dongo or Angola), existed as early as the 1530s, probably earlier. It was then destroyed, as Bellin relates, by colonial Portuguese who wanted to control parts of modern-day Angola and build forts and bring settlers. The Kingdom of Matamba was another powerful early-modern African kingdom that resisted Portuguese advances for several years before its kingdom was invaded in 1744, divided in two, and then eventually annexed by Portuguese Angola.

Portuguese Angola was founded in 1575 with the settlement of Luanda. The Portuguese founded Benguela in 1617. Thus, this map captures a moment in the history of European colonialism in Africa. It highlights Portugal's efforts to consolidate rule in Angola after their conquest of the Kingdom of Ndongo and before the complete subjugation of the Kingdom of Matamba.

Originally created for of Abbé Prévost's Histoire Générale des Voyages by Jacques-Nicolas Bellin, this map was published by Jean François de La Harpe's in his Abrégé de l'Histoire Générale des Voyages in 1780. Two examples of the 1780 edition of this map are cataloged in OCLC and are part of the institutional collections at Universitätsbibliothek München in Munich and Bayerische Staatsbibliothek, also in Munich. The works by Prévost and de la Harpe are well represented institutionally.