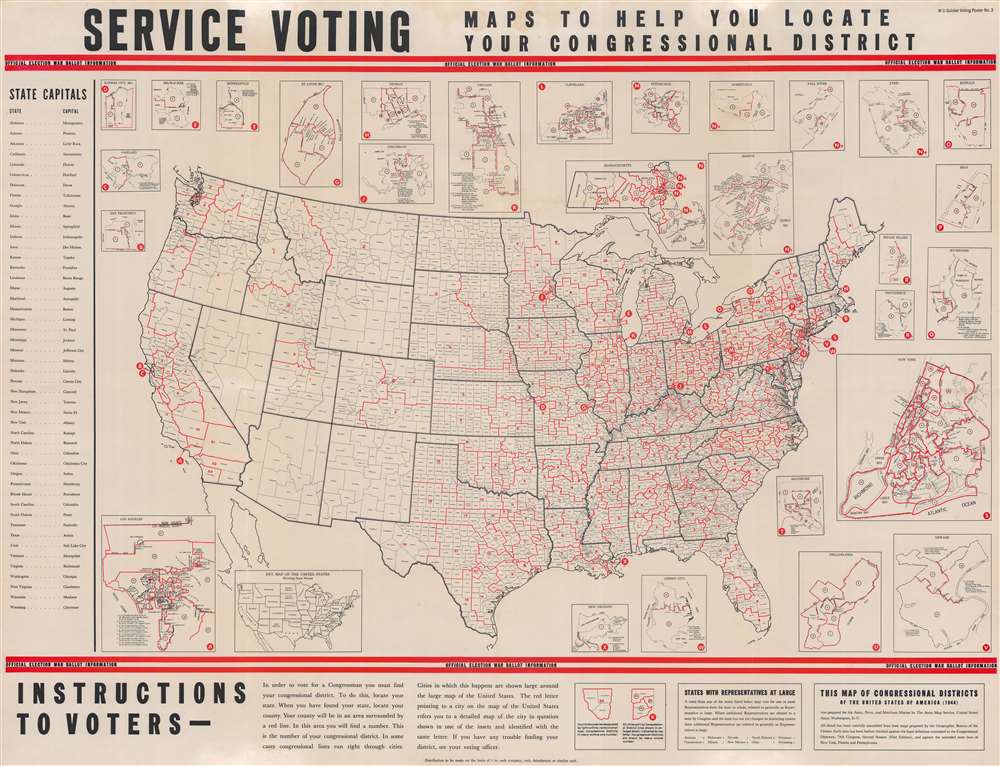 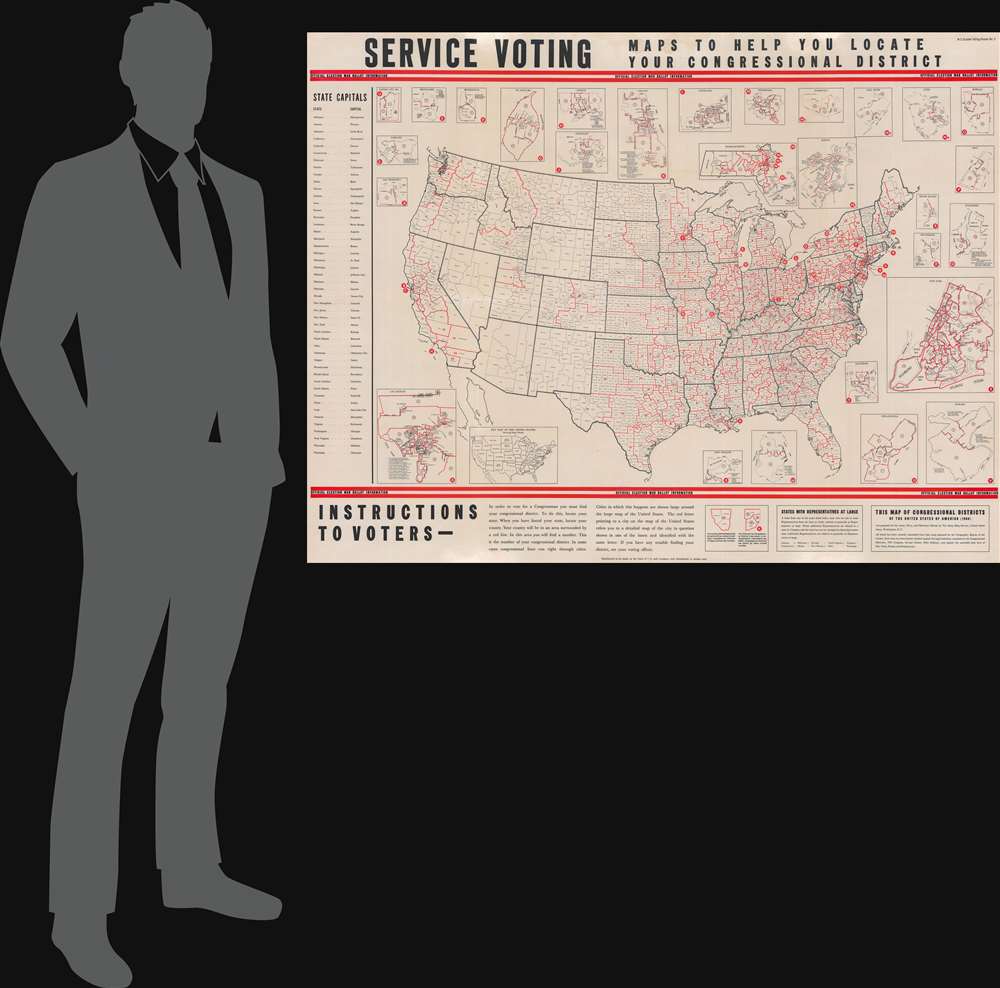 This is a 1944 Army Map Service map of the United States created to help U.S. service personnel find their congressional district. During the 1944 presidential election, a concerted effort was made to help service personnel vote, with varying degrees of success. This map reflects part of that effort.

Red lines delineate congressional districts within states, all of which are numbered. Congressional districts in larger cities appear as inset maps. Each city is labeled with a letter corresponding to the appropriate inset. Such cities include New York City, Boston, Chicago, Pittsburgh, Cleveland, Minneapolis, Detroit, Los Angeles, and San Francisco. Further insets detail districts in Massachusetts and Rhode Island. An alphabetic list of state capitals appears outside the left border. Instructions to voters are included below the bottom border.

Military Voting in the United States

The United States first faced a presidential election during a major war in 1864 during the American Civil War (1861 - 1865). In that year, the issues of enabling active-duty soldiers to vote caused a political uproar. Republicans (who controlled state legislatures) enacted short-lived provisions to allow soldiers to vote. Many Democrats opposed the measures, believing that soldiers would simply support their commander-in-chief (at the time Abraham Lincoln) and be 'herded along' by superior officers. Another debate raged over whether or not a soldier actively fighting a war maintained their right to vote, or if the right to vote was among the personal freedoms forfeited while serving.

Soldier Voting and the Election of 1944

These same controversies reappeared during the 1944 World War II (1939 - 1945) presidential election. The absentee voting system had not advanced significantly since 1864. In addition, the logistics of providing ballots to highly mobile soldiers all over the world was near impossible. At the time, many states required absentee ballots to be requested, which meant a soldier would need to write to state election officials for a request form, wait for that form to be delivered (if it appeared at all), fill out the form and return it to the state election officials, and finally wait for their ballot to be mailed. Proponents of this (impossible) method also wanted the names of candidates to be printed on ballots, which meant waiting for the nominating conventions, making it even less likely that any personnel overseas would receive their ballot before the election. Moreover, congressmen from southern states objected to sending ballots if soldiers were exempt to poll taxes.

In the end, the bill that passed encouraged states to change their absentee ballot procedures to help soldiers participate. It also allowed for state governors to adopt the 'Official Federal War Ballot', which twenty states authorized. This ballot featured blank spaces where soldiers could write the names of their preferred candidates for federal offices and the bill stated that ballots could not be declared invalid for spelling mistakes as long as 'the candidate intended by the voter is plainly identifiable'. In the end, an estimated 2.7 million absentee ballots from service personnel were accepted, out of a total of approximately 9 million citizens in the armed forces, about a 30% turnout, and 5.6% of the vote count. Many frontline soldiers didn't vote because they either didn't see that it affected them or there was too much hassle. Rear echelon troops, however, were very enthusiastic. Members of an African American artillery unit had 'huge voting placards hanging near the mess tent' and the men crowded around looking for their respective state's voting requirements. According to the Chicago Tribune there were crowds of American personnel in London's West End cheering election slogans on election night.

This map was prepared by the Army Map Service and distributed to military units, likely worldwide. This is the only known cataloged example.

Good. Mounted on heavy linen.
Looking for a high-resolution scan of this?