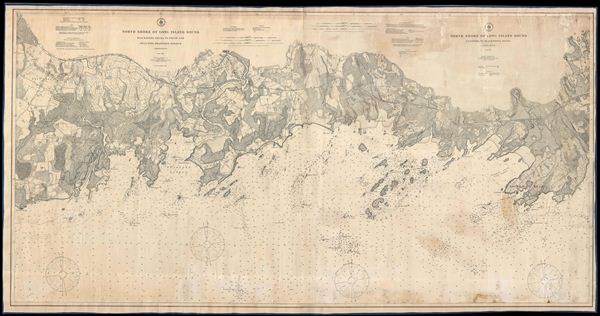 This is an impressive large format rolling 1907 nautical chart or maritime map of the northern shore of the Long Island Sound or the Connecticut Coast. Issued by the U. S. Coast and Geodetic Survey, this map covers from east Haven, Connecticut to Sachem Head, Connecticut, inclusive of South Send, Branford Harbor, Branford City, Indian Neck, Pleasant Point, Stony Creek, Hoadley Point, Joshua Cove and Guilford. It further includes the Thimble Islands (Ghost Islands) and Blackstone Rocks. The chart was first issued in 1894, the present example having been updated to 1907. As a whole this chart offers exceptional detail both inland at sea. Countless depth soundings in feet dot the Long Island Sound and adjacent harbors, inlets, and bays. Issued by the U.S. Coast and Geodetic Survey under the supervision of O. H. Tittman.

Good. Professionally flattened and backed on fresh linen. Some discoloraitons. Upper border repair.
Looking for a high-resolution scan of this?