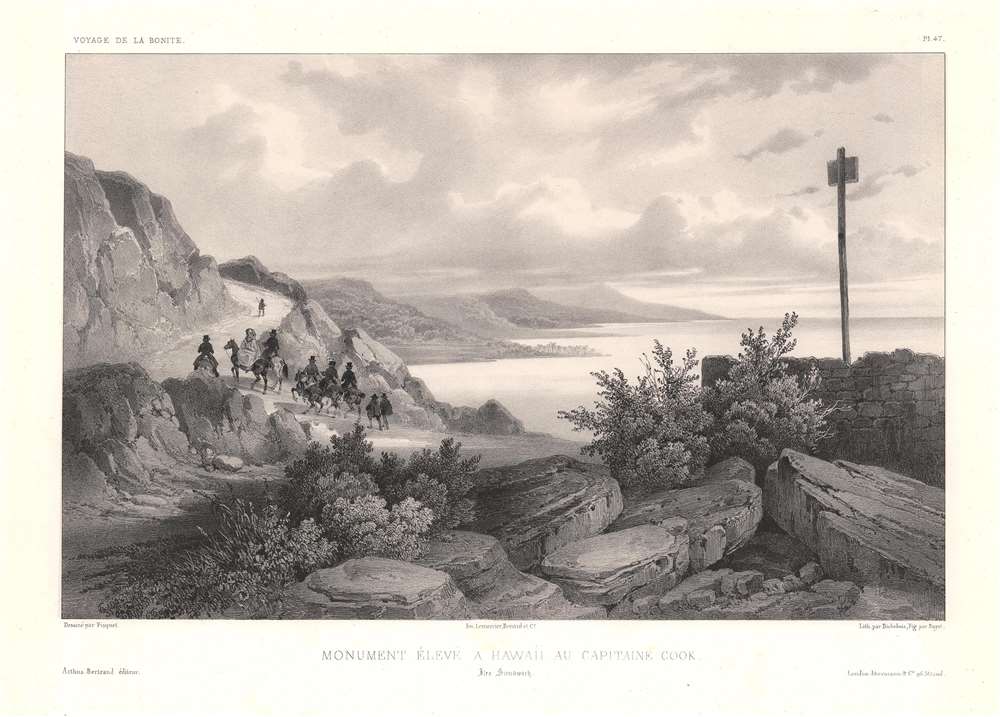 Monument to Captain James Cook in Hawaii, visited by a later expedition.

This is a c. 1845 lithograph view of Kealakekua Bay, Hawaii (Sandwich Islands) illustrating a memorial to Captain James Cook, erected roughly where he was killed in 1779. The view was sketched by Théodore Auguste Fisquet, one of the resident artists on the Bonite expedition, a French scientific and diplomatic voyage around the world in 1836 - 1837.

By the time of his third long-distance voyage in 1776, James Cook was an experienced naval officer who had launched two scientific expeditions to the Pacific, while also searching out a Northwest Passage. On his third voyage, after briefly stopping at the Hawaiian Islands in January 1778, Cook explored the west coast of North America up to the Bering Strait before returning to Hawaii in early 1779.

After possibly being mistaken for a deity, Cook and his crew got into scuffles with the local population and attempted to kidnap Kalaniʻōpuʻu, the King of Hawaii. In the ensuing fracas, Cook was attacked and killed, but was still somewhat revered by the local people and his remains were given ceremonial treatment. The expedition eventually returned to London in October 1780 but had been decimated by disease and demoralized by the death of Cook and several other officers. Nevertheless, the voyage collected important cultural, scientific, and geographic information and helped solidify Cook's reputation as one of the great explorers of his age.

Currently, an obelisk stands at roughly the site where Cook was killed. It was put up in 1878, replacing the simple marker evident here. The more humble monument presented here was erected by the crew of the H.M.S. Blonde in 1819 on a voyage to return the bodies of the Hawaiian king and queen, who died from measles while visiting London. In the years following Cook's voyage, foreign influence increased with the arrival of more foreigners, initially British and American, and later Chinese, Japanese, and Filipinos. The reformist, modernizing Kamehameha dynasty was founded in 1795, but was unable to halt the reduction of the Native Hawaiian population due to disease, or keep foreign imperialism at bay, as Hawaii lost its autonomy in the 1890s.

Roughly sixty years after Cook's third voyage, the French ship La Bonite undertook a similar voyage of scientific and geographic exploration. Led by Auguste-Nicolas Vaillant, the voyage circumnavigated the globe while disembarking diplomats at various posts. Along the way, important observations contributed to several fields, especially botany and zoology. A large account of the voyage was written up upon the ship's return and divided into thematic volumes, including an album of drawings by the ship's artists, Théodore Auguste Fisquet and Barthélémy Lauvergne. Unlike Cook's voyage, the Bonite was particularly fortunate and no sailors were lost.

This view was published as part of the huge multivolume work Voyage autour du monde exécuté pendant les années 1836 et 1837 sur la corvette La Bonite commandée par M. Vaillant, capitaine de vaisseau, and appears to have been part of the 99 plates included in the Album historique. It was sketched by Théodore Auguste Fisquet, edited by Arthus Bertrand, and printed using a lithograph technique by the firm Lemercier, Benard et Compagnie (more specifically, Louis Philippe Alphonse Bichebois and Adolphe Jean Baptiste Bayot). It was published in London by Akermann and Co. Because of the variety of catalog entries for the Voyage autour du monde and the Album historique, the prevalence of this view is difficult to know with certainty. It is cataloged in the holdings of the National Library of Australia and the Album historique is cataloged in a small handful of libraries in Europe. This view is scarce to the market.

Théodore Auguste Fisquet (1813 - 1890) was a French artist and painter and, along with Barthélémy Lauvergne, one of the two artists assigned to the 1836 – 1837 Bonite expedition that circumnavigated the globe. Learn More...


Louis Philippe Alphonse Bichebois (April 14, 1801 – April 17, 1851) was a French engraver and lithographer who specialized in depictions of landscapes and studied under Jean-Baptiste Regnault and Jean-Charles-Joseph Rémond. Learn More...