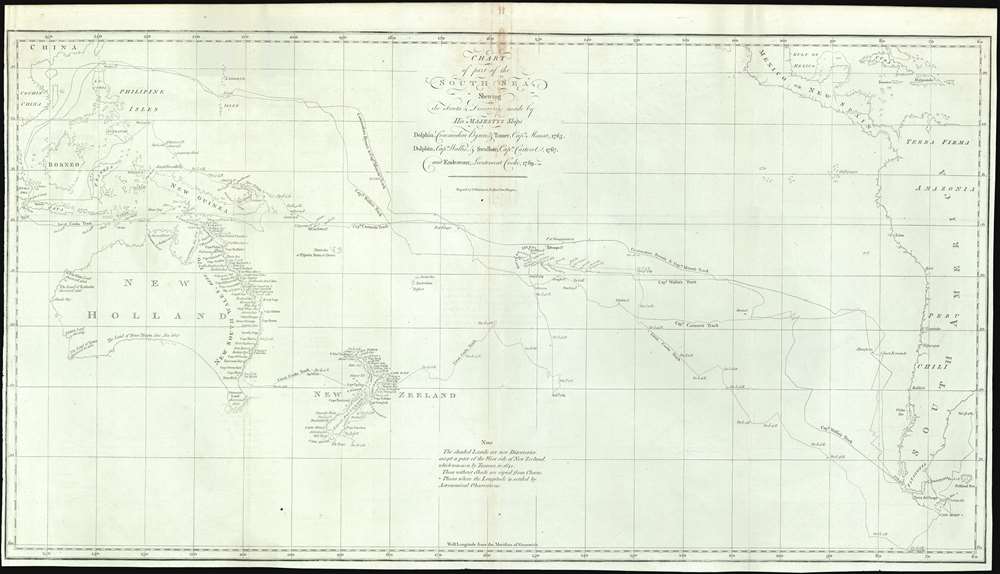 The first official map of Cook's first voyage - the best map of the Australia, the South Pacific, and New Zealand of it time.

This is a rare 1773 map of the South Pacific issued to illustrates English voyages of exploration in this region between 1765 and 1769, including the voyages of John Byron (1723 - 1786), Samuel Wallis (1728 - 1795), Philip Carteret (1733 - 1796), and James Cook (1728 - 1779). At the time of publication this was the most accurate extant map of this region, unveiling a wealth of new information to curious Europeans. Coverage extends from Sumatra to South America, and from Baja California and Taiwan to Tierra del Fuego, including all of Australia, Polynesia, New Zealand, the Philippines, Melanesia, and eastern Indonesia. Tasmania or Van Diemen's Land is notably attached to the Australian mainland. Tracks drawn from ship's original logs detail with precision the routes taken by Commodore Byron and Captain Mouat (1765), Captain Carteret (1767), Captain Wallis (1767), and Lieutenant James Cook (1769).

While this map shows the routes of multiple explorers, the focus of the map is 1768 - 1771 voyages of James Cook in the H.M.S. Endeavour. This was Cook's first major voyage of discovery. Ostensibly the purpose of the voyage was to observe and record the 1769 transit of Venus across the Sun which, when combined with other measurements, would enable an accurate triangulation of the distance of between the Earth and the Sun. The secondary secret purpose of the voyage, as assigned by the Admiralty, was to search the south Pacific for signs of the long speculated rich southern continent of Terra Australis or the 'South Land'. While Cook was unable to find the non-existent continent, he did accurately map numerous Polynesian islands, New Zealand, and became the first Europe to visit and map the eastern coast of Australia. Cook claimed eastern Australia (then New Holland) for England, but the annexation was not immediately recognized by the crown. Upon his return to England in 1771, Cook's journals were compiled and published by John Hawkesworth, turning Cook into an instant hero. The successful voyage itself heralded a new era of scientific exploration. The two dominant maritime powers of the time, France and Britain, would confront each other in a rivalry for power, prestige, and discovery.

This map was published for the 1773 first edition of John Hawkesworth's account of James Cook's first voyage of Discovery 1768-1771. This was the only officially sanctioned account of Cook's first voyage, and as such, it was drawn from otherwise inaccessible primary source material. The incredible interest in Cook's voyages throughout Europe led to several unsanctioned copies to be issued by other publishers, but most were significantly smaller and of inferior quality. It was engraved by William Whitchurch, of Pleasant Row, Islington, London.

This map is well represented in many institutional collections due to the popularity of Hawkesworth's work, but is has become scarce to the market.


William Whitchurch (April 1748 - February 1794) was a British line engraver and printer active in London and Chichester in the second half of the 18th century. Whitchurch was born at St. Andrew Holborn. He apprenticed to the London engraver Joseph Ellis (1734 - c. 1800) from 1762. Whitchurch engraved maps for Cook, Dalrymple, Lerpinière, and others. Learn More...

Hawkesworth, J., An Account of the Voyages Undertaken by the Order of His Present Majesty for Making Discoveries in the Southern Hemisphere…, (London: W. Strahan and T. Cadell) 1773.