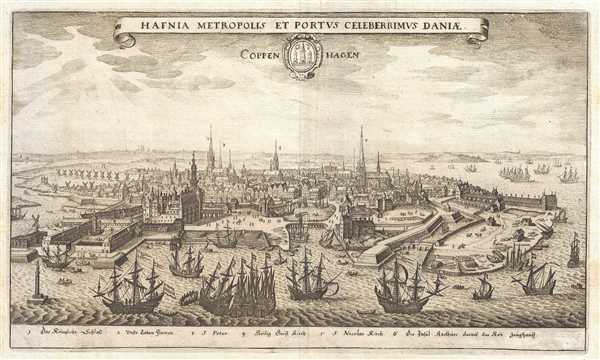 Identifies six buildings within Copenhagen, including the Royal Castle and St. Peter's Church.
$475.00

This is a 1638 Matthaus Merian view of Copenhagen, Denmark. The view, oriented from the harbor, depicts the city in some detail. Several large sailing ships, too big to moor alongside a wharf, are anchored in the harbor, while numerous small rowboats traverse the expanse between the city and the ships. Six sites within the city are numerically labeled and correspond to an index situated along the bottom border. The first is the Royal Castle (Das Königliche Schloß) and numbers two through five are churches. The last, number six, is a public square near the Royal Castle. Myriad other unidentified buildings are also illustrated, along with rows of windmills situated outside the city. The city's coat of arms is included below the title.

This view was created by Matthaus Merian and published in 1638.

Matthäus Merian (September 22, 1593 - June 19, 1650) was a important Swiss engraver and cartographer active in the early to mid 17th century. Merian was born in Basel and studied engraving in the centers of Zurich, Strasbourg, Nancy and Paris. In time Merian was drawn to the publishing mecca of Frankfurt, where he met Johann Theodor de Bry, son of the famed publisher Theodor de Bry. Merian and De Bry produced a number of important joint works and, in 1617, Merian married De Bry's daughter Maria Magdalena. In 1623 De Bry died and Merian inherited the family firm. Merian continued to publish under the De Bry's name until 1626. Around this time, Merian became a citizen of Frankfurt as such could legally work as an independent publisher. The De Bry name is therefore dropped from all of Merian's subsequent work. Of this corpus, which is substantial, Merian is best known for his finely engraved and highly detailed town plans and city views. Merian is considered one of the grand masters of the city view and a pioneer of the axonometric projection. Merian died in 1650 following several years of illness. He was succeeded in the publishing business by his two sons, Matthaus and Caspar, who published his great works, the Topographia Germaniae and Theatrum Eruopeaum, under the designation Merian Erben (Merian Heirs). Merian daughter, Anna Maria Sibylla Merian, became an important naturalist and illustrator. Today the German Travel Magazine Merian is named after the famous engraver.

Very good. Even overall toning. Light wear along original centerfold. Blank on verso.
Looking for a high-resolution scan of this?