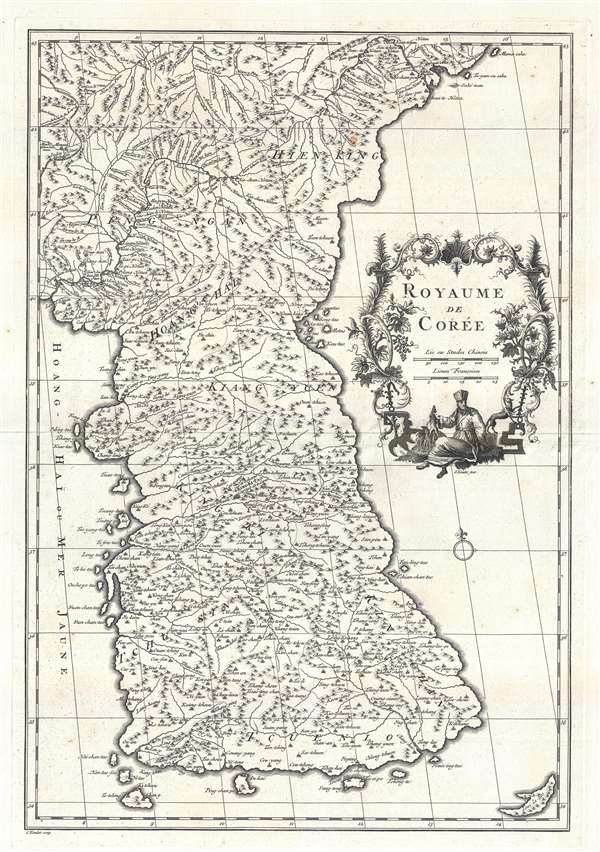 The first map to provide Europeans with information about Korea.

This is Jean Baptiste Bourguignon d'Anville's (1697 - 1782) landmark 1737 map of Korea - the first map to introduce Korea to Europe. It is the first European published map to provide detailed cartographic data on Korea including a breakdown of Korean provinces with a reasonably accurate nomenclature. It further provides valuable references relating to the Dokdo / Ulleungdo dispute between Korea and Japan.

Korea has an internal tradition of cartography dating back to the at least the 12th century when Kim Pusik published an 1145 geographical treatise in the Samguk Sagi, a history of the Three Kingdoms. Nonetheless, despite a sophisticated national cartographic tradition, little was known of Korea in the west. Both the Chinese Qing Emperor and the Korean Joseon Dynasty of the 17th and early 18th centuries closed Korea to European missionaries, which were then the primary source of cartographic material on China and Asia.

Nonetheless, between 1706 and 1716 the Qing Kangxi Emperor (康熙; 1654 - 1722) initiated an ambitious Jesuit-assisted program to scientifically map China, resulting in the first detailed maps of China to employ European surveying technology. The project also included the first scientific mapping of Tibet, in 12 parts, and an important map of Korea - the Régis Map.

The Korea map was a particular challenge. Working in 1709 and 1710, the Jesuit missionaries Father Jean-Baptiste Régis (1664 - 1738), Father Pierre Jartoux (1669 - 1720), and Father Erhernberg Xavier Fridelli (1643 - 1743) were able to map the Korean / Manchurian border region but were denied entry into Korea itself. Instead, they sent the Jesuit-trained Chinese mathematician and surveyor He Guozho to accompany a Chinese embassy to Korea under the Manchu official Mukedeng (穆克登), referred to by Du Halde as the 'Tartar Lord.'

When the embassy reached Seoul, Mukedeng requested a map of Korea from the chief minister YiYu, of the court of Joseon King Sukjong (肅宗; 1661 - 1720). YiYu's solution is recorded in the Annals of the Joseon Dynasty (조선왕조실록 - Joseon Wangjo Sillok, 39-6-2),

[Mukedeng] requested a map of our country. Although the interpreters tried to palter with him, it seems to have to give him something… But the maps in the Border Defense Bureau [Pibyensa] are too detailed to present. We just received a map that is neither too precise nor too general, with many errors … we may show him his one. (Song, Nianshen, Making Borders in Modern East Asia: The Tumen River Demarcation, 1881 - 1819, page 166.)

Mukedeng's copy of this intentionally vague and inaccurate Korean map, as well as He Guozho's observations en route to Seoul, and earlier Jesuit assisted border surveys were compiled into a Chinese map of Korea very much resembling the present offering, published in the Kangxi Atlas by the Jesuit Father Jean-Baptiste Régis. Jean Baptiste du Halde (1674 - 1743), a French Jesuit historian, obtained a copy of the Régis Map from Jesuit contacts in China, probably Régis himself, and presented it in Paris to the French cartographer Jean Baptiste Bourguignon d'Anville.

The map is also significant today for its illustration of Dokdo as Tchian-chan-tao, a Chinese transliteration of Usando, an archaic name for Dokdo. The map further identifies the nearby island of Fan-ling-tao, a similarly archaic Chinese transliteration of Ulleungdo Island. These two islands, known in the west as the Liancourt Rocks after the 1849 visit of a French whaling ship of that name, are currently part of a sovereignty dispute between Japan and South Korea, with both claiming ownership. Both sides of the dispute point to old maps, like this one, to support their claims

Who Came First, Delahaye or Kondet?

The 1735 first known publication of d'Anville's Royaume de Corée was engraved by Jean Baptiste Henri Delahaye and singed as Delahaye Fils. It is recognizable for the Delahaye Fils imprint in the lower right - also for being printed on thin folded paper. The second known publication was appeared 2 years later in 1737, in d'Anville's Nouvel Atlas de la Chine, published in The Hague. Although there are no major cartographic changes, the 1735 Du Halde examples bear the Delahaye Fils imprint while the 1737 d'Anville edition bears G. Kondet and C. Kondet imprints.

The Kondet imprints are alternate spellings for Claas Condet (1685 - 1725) and Gerardus Condet (1715 - 1764). The appearance of both names on the map is of interest given that Claes, who engraved the map died in 1725 and Gerard, who engraved the cartouche, would have been little more than 10 years old when the map was engraved. This suggests that the map was most likely engraved sometime before 1725, but languished unpublished for roughly 10 years. It is likely that the C. Kondet map was engraved prior to the G. Kondet cartouche. Given that d'Anville created the map, and the date of Claes Condet's death, we think it likely that the first engraving and thus edition of the map, where both the engraver of the cartouche and the engraver of the map are identified, is the 1737 D'Anville/Kondet Edition. The second edition, although published first in 1735, is the Du Halde edition bearing the imprint of Jean-Baptiste Henri Delahaye (Delahaye Fils). A close study of the platemarks on both editions suggests they were entirely different plates. In particular, the Delahaye/Du Halde editions have a narrower lower platemark than the d'Anville/Kondet editions.

Much of the complex publication history is noted above. The present example is the Condent edition - which we believe, as above, to be the first. It was issued in The Hague for d'Anville's Nouvel Atlas de la Chine. The map is well represented institutionally, but is scarce to the market.


Gerard Condet (1715 – 1764), aka Gerard Kondet or Gerardus Condet, was a Dutch line engraver active in The Hague during the early 18th century. Learn More...