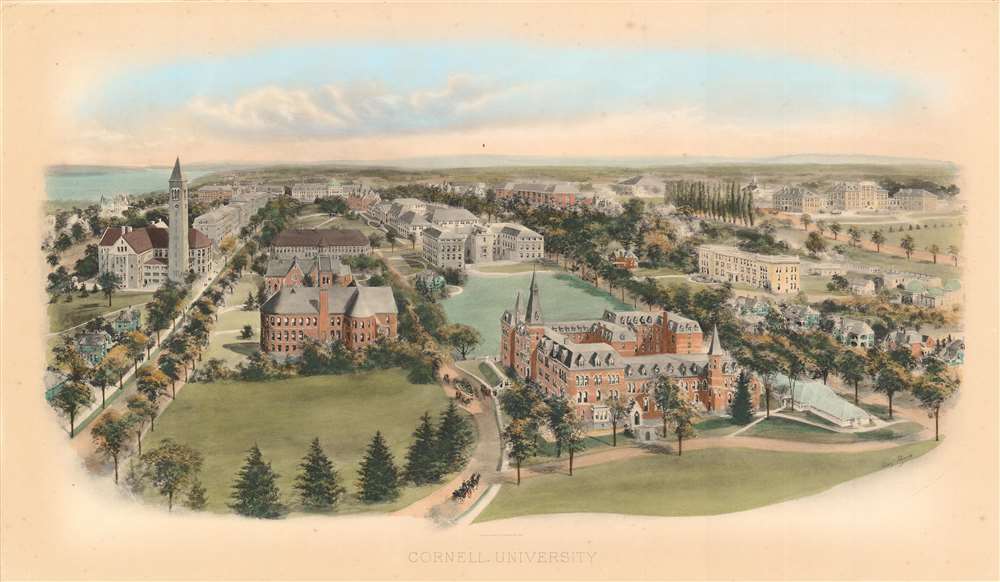 This is a rare 1906 Richard Rummell photogravure view of Cornell University. Founded in 1865 by Ezra Cornell, Cornell is a private and statutory Ivy League research university in Ithaca, New York, at the southern tip of Cayuga Lake. The view looks on Cornell from a roughly north-northwesterly perspective. Lake Cayuga appears in the far upper left. McGraw Tower, part of the University Library, and Cornell's most iconic building appears prominently at left. Also prominent in the foreground are Barnes Hall, Sage Chapel (behind Barnes), and Sage Hall. Further out we can recognize Stimson Hall. In the distance Sibley Dome at the College of Architecture and Lincoln Hall, the music building are depicted.

Rummell began issuing views of American colleges around 1905. Rummell's views come in several different forms including color, as here, and black and white. Like most of Rummell's university views, the present Cornell View is copyrighted by his publisher, W. T. Littig and Company.

In more recent times Arader Galleries has acquired many of the original printing plates for Rummell's college views and currently issues re-strikes, but the original early 20th century printings, as here, have become extremely rare. We are also aware of a second plate for the Cornell view acquired in the 1960s by Paul Victorius who issued water colored restrikes, and in 1969 sold them through alumni offices. The Victorius plate can be distinguished from the older 1906 plate as it lacks the 'A. W. Elson and Company Photogravure' imprint just below and to the right of Rummell's signature. The Cornell version was advertised in the October 1969 Cornell Alumni News.

This view was created by Richard Rummel and published by W.T. Littig and Company in 1906. We have encountered many of Rummell's views over the years, but this is only the second time we have seen an original of Cornell University.


Alfred Walter Elson (March 20, 1859 - November 22, 1938) was an American photographer, printer, and lithographer based in Boston. Elson was born in Massachusetts, the son of German-Bavarian immigrants. Elson's father, Julius, was a jeweler. Elson operated under the imprint of A.W. Elson and Company, active from roughly 1894 to 1925. Elson is best known for his fine photogravure plates, among them many of Richard Rummell's iconic college views. Elson prints are often mis-identified as 'Welson' due to the often-weak impression of his imprint. The Elson offices were located at 146 Oliver Street, Boston. Elson died of a lingering sickness in 1938. He was survived by his wife Maud, who lived until 1955.

Very good. Modest even toning.
Looking for a high-resolution scan of this?