1735 Homann Heirs Map of Corsica During its Revolution 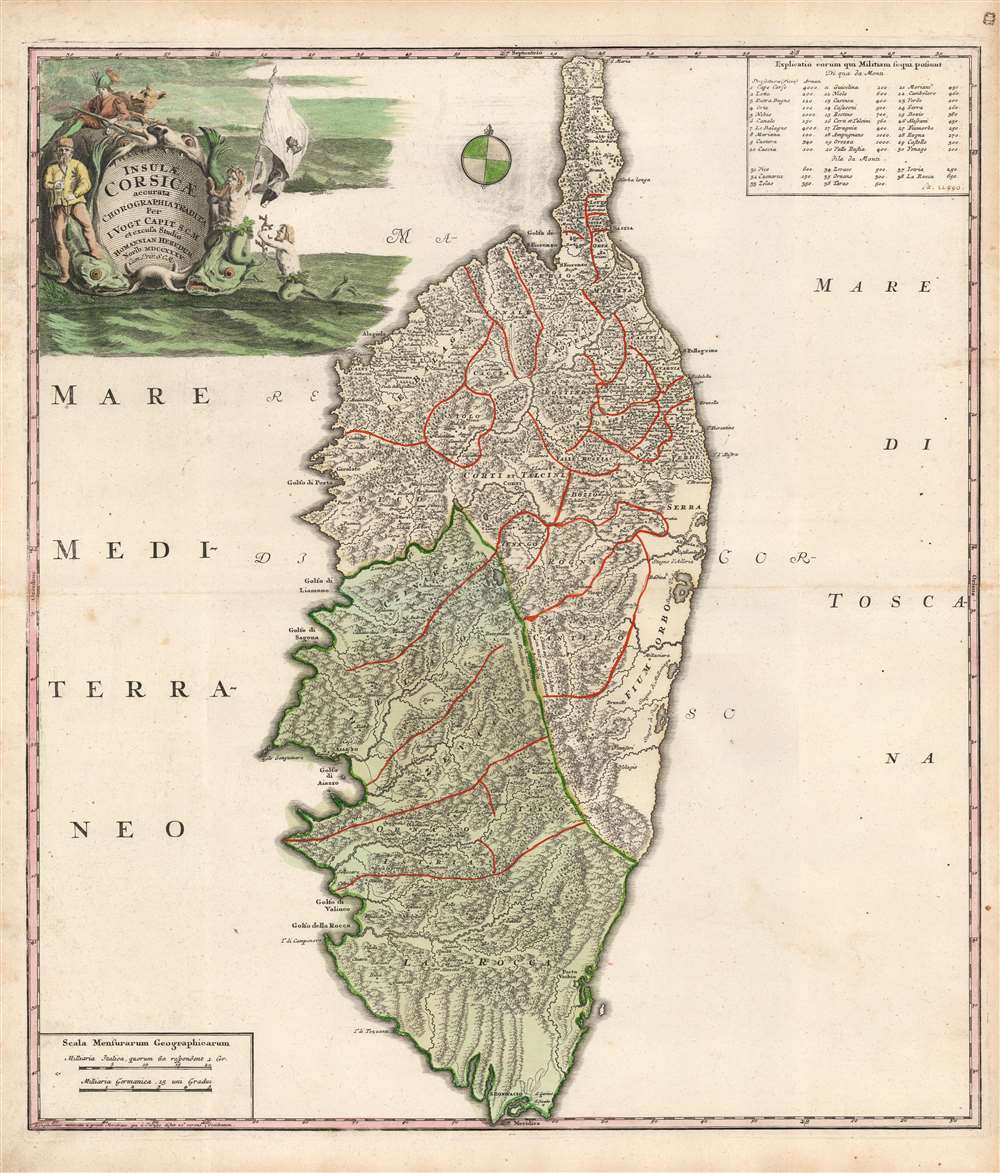 1735 Homann Heirs Map of Corsica During its Revolution

This is a 1735 Homann Heirs map of Corsica. The map's outline and detail are considerably advanced over maps of the island prior to 1734. It thus significantly represents the first major improvement in the mapping of Corsica since Jansson's 1644 map - which was the dominant model for the mapping of the island throughout the 18th century. The firm of Homann Heirs themselves produced a map of Corsica in 1732 based on the Jansson model, making it all the more striking that they should update it with the present map so soon after.

The map is credited, in its cartouche, to a captain in the army of the Holy Roman Emperor (then Charles VI) named Johan Vogt. Virtually nothing is known of the man, but the map appears to have been timely: in 1731 the emperor began sending troops to Corsica on the behest of its Genoese in order to put down a revolution. By 1732, there were twelve thousand Imperial troops on the island fighting an unwinnable mountain war against Corsican guerillas. A treaty was negotiated in May 1732 whereby the Genoese would retain power but implement reforms, but Genoa would return to the practices which inspired the initial revolt, resulting in a second explosion of violence (which would offer opportunity to the German adventurer Theodor von Neuhoff, who successfully snatched kingship of Corsica until he was promptly thrown in debtors' prison, in Amsterdam.)

The map represents an entirely fresh cartographic perspective on Corsica. The copious mountains depicted reflect the baffling prospect the island's terrain offered to both the cartographer, and to the professional army of which he was almost certainly part. It depicts the entirety of the island in astonishing detail, labeling cities, towns, and villages, as well as rivers and mountain ranges. Text along the mountainous spine of the island notes, in German and Latin, that the plains atop the highest mountains are covered with great pine trees: a daunting prospect for any armies wishing to move unobserved. Several major cities are illustrated, including Bastia, Saint Florence, Rosoli, Bonifacio, and Porto Vecchio. Emphasizing the military source of this map, a table in the upper right enumerates, from each Corsican province, the number of men available for military service (an early manuscript hand gives a total of 22,990). The present map would be later credited in copies made by Ottens in 1737, in 1769 by the French mapmaker Robert de Vaugondy, and by the Spanish mapmaker Lopez. Ottens' map retained the military service table, but clearly Vaugondy considered the information no longer relevant.

The map has a beautiful old color title cartouche; unusual in a Homann map. The design is an improved engraving of the same scene appearing on the earlier Homann Heirs map of the island. The title and source of the map is presented as if in the maw of a great sea monster, which is itself flanked by two monstrous fish. To the left, a sailor with plumb line in hand stands with his foot on one fish's head; to the right, Neptune blows a shell horn while waving a flag bearing the 'Moor's head' arms of Corsica. A merman swims up to present the god of the sea with a tribute of red coral. Atop the sea monster, a musketeer sits with a ferocious wolf.

We are aware of two states of this map: the first, printed in and around 1734, lacks the imperial privilege; the privilege appears on examples printed in and after 1735; ours is an example of this second state. Examples of the map appear in the Homann Heirs composite atlases. We see twenty seven examples of this state in institutional collections.


Vogt, Captain Johan (fl. 1734) was a German officer and the only credited source for the first, contemporary 18th century mapping of the island of Corsica. Virtually nothing is known of him, apart from the map bearing his name, and a reference to a 1735 travelogue - 'Beschreibung der Insel Corsica' - which was apparently printed in Nuremberg and Altdorf, but has not survived in institutional collections. Its existence is hinted at only by a bibliographical reference in John Pinkerton's 1808 'A General Collection of the Best and Most Interesting Voyages and Travels in All Parts of the World.' We do not see any book of this title surviving in any institutional collection. Vogt's map appears first in 1734, printed by the firm of Homann Heirs; it was copied later by Ottens in 1737, and again in 1769 by the French mapmaker Vaugondy and the Spanish Lopez. Vogt's title, 'Capit. S.C.M.' indicates that he was an officer of the Holy Roman Empire, and was most probably German; perhaps a military engineer accompanying the 12000 Imperial troops sent in 1732 to Corsica in order to put down the revolution which had broken out there. Learn More...