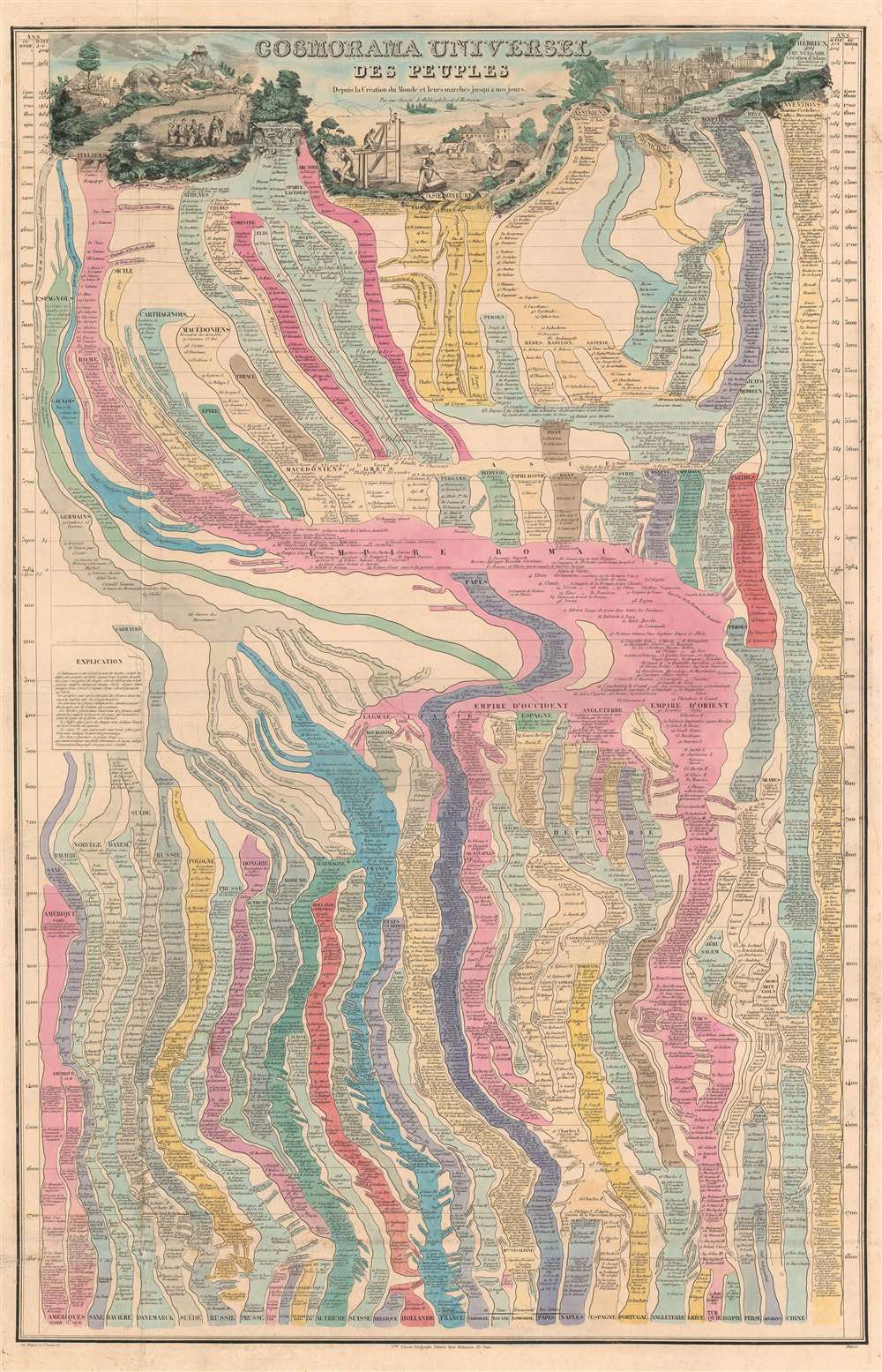 A marvelously complex c. 1852 universal timeline chart by the French cartographer Victor Clérot. The chart traces human history from creation, roughly, to the founding of the Roman Empire. The cartographer follows the Usher Chronology, placing the date of Creation at 4004 BC with the Biblical Deluge at about 2300 BC. The chart then proceeds to break down history in 100-year increments. After 3984 years, Jesus Christ is born, and standard BC/AD dating system is adopted to 1800.

Breaking it all down

From the upper graphic, the left of which illustrates the Garden of Eden, Noah's Ark, and ancient sacrifices, and the right, the architectural accomplishments of the world, time flows like a river from various geographical roots: Ancient Greece, Asia Minor, Germany, Egypt, and China. A separate flow of time illustrates inventions, celebrities, and discoveries. After Several thousand years, much is consolidated in the Roman Empire, which appears as a pink sea at center. German and Sarmate tribes are separated to the left. From these roots, most modern nations appear to evolve. China follows a unique separate path from the earliest days. American history here begins around 900 AD, with the Dane Gunnbjörn Ulfsson's discovery of Greenland. The final event identified on this chart is the establishment of the French Second Empire in 1852.

There appear to have been several editions of this chart issued by different publishers. The earliest we have found was published by Armand Joseph Lallemand on blue ink, dating to about 1841. The present example, issued by Victor Clérot, was printed by Imp. Mangeon (Rue St. Jacques, 67). Ironically, given that it is a time chart, this item has not date. Nonetheless, it features events to the establishment of the Second French Empire in 1852.

We are aware of only single example of the 1841 Lallemand issue - at the Bibliothèque Nationale de France, which, also undated, terminates at the reign of Louis Philippe I (1773 -1850) . Although the c. 1852 Victor Clérot issue, offered here, is listed in the OCLC, no institutional holdings are identified and no market history.

Victor Clérot (fl. 1855 - 1890) was a Paris based geographer and publisher active in the latter half of the 19th century. As with most small volume French map publishers of this period there is very little available information regarding Clérot. We know he published several maps of Paris, a world map, some timelines, and a number of guidebooks, but little else. His offices were located at 23 Quai Malaquais in Paris's 6th Arrondissement.

Very good. Some toning and wear on original fold lines. A few old fold spits reinforce and repaired on verso.