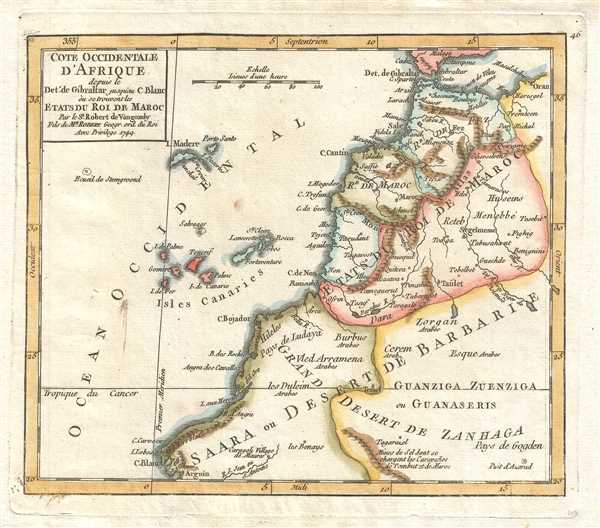 This is a hand colored 1749 Didier Robert de Vaugondy map of northwestern Africa, depicting from the Canary Islands to Algeria and from southern Spain and the Strait of Gibraltar to Western Sahara and Mauritania. The map centers on Morocco, which is divided into four distinct regions, the States of the King of Morocco (Etats du Roi de Maroc). The first, the Kingdom of Fez (Royaume de Fez), was established in the 8th century and existed until the establishment of the French and Spanish protectorate in 1912. The Kingdom of Fez included both Fez and Tangiers. The Kingdom of Morocco is also labeled, while the other two states are not. The Atlas Mountains divide the three states along the coast, the Kingdom of Fez, the Kingdom of Morocco, and a third, unlabeled, state, from the fouth, which parallels the mountains and is depicted as equivalent in size to the other three combined. Outside of Morocco, the regions are collectively labeled as the Sahara, or Desert of Barbary (Saara ou Desert de Barbarie). Several different tribes of 'Arabs' are labeled in these areas. Off the coast of Africa, the seven Canary Islands are depicted, Tenerife, Fuerteventura, Gran Canaria, Lanzarote, La Palma, La Gomera, and El Hierro (I. de Fer). The 'First Meridian' runs through El Hierro and was fixed there by a decree of French King Louis XIII in 1634. The islands of Madeira and Porto Santo are depicted above the Canary Islands. The southern tip of Spain is also included and Cadiz, Malaga, and Gibraltar are labeled. Rivers are depicted throughout the map and towns dot the landscape in the States of the King of Morocco.