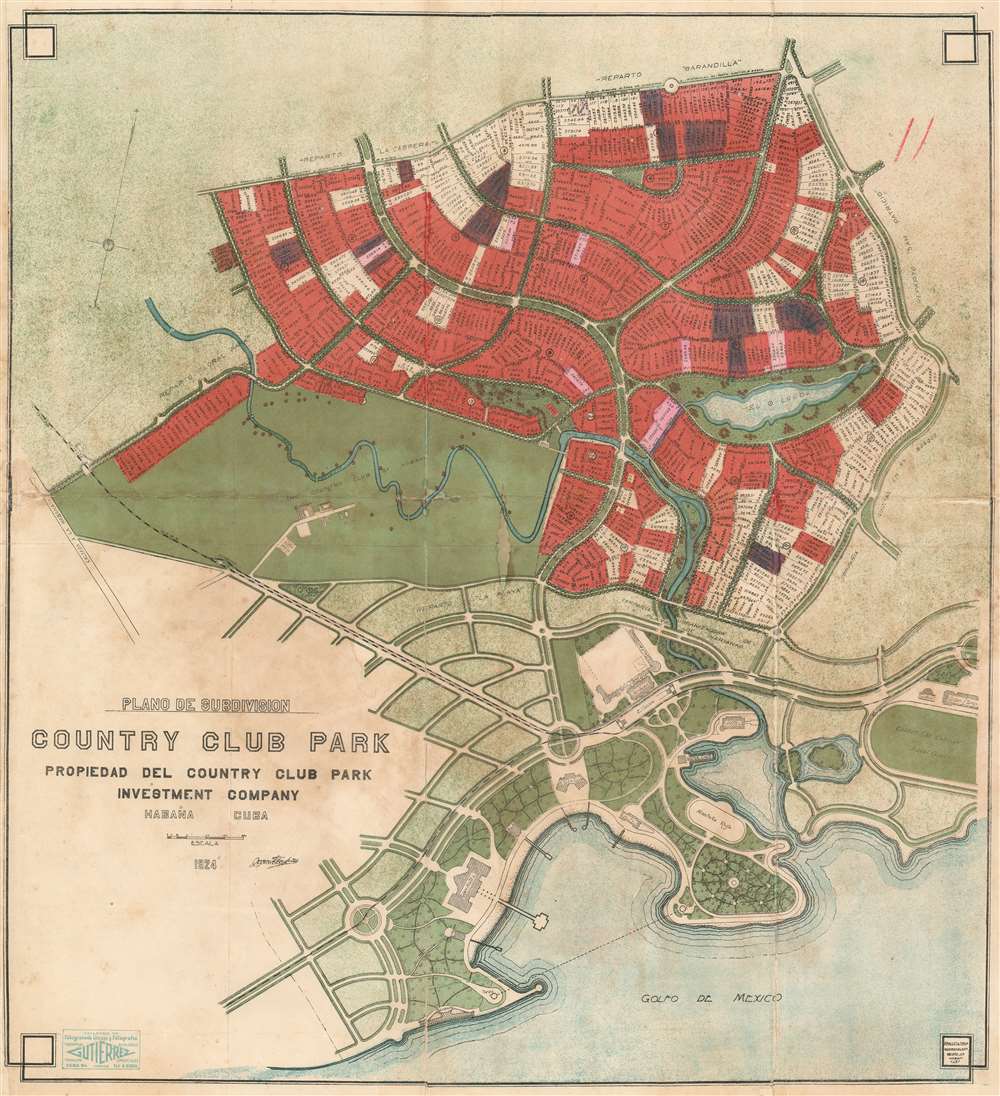 The only surviving example of the 1924 Gutierrez promotional real-estate map of the Siboney / Country Club Park neighborhood of Havana, Cuba - generally considered to be the wealthiest neighborhood in the city, home to elites like the Castro family, ministers, and other government 'insiders.' In 1924, this development was known as Country Club Park, home to Havana's most prestigious golf clubs, hotels, and the Yacht Club - all of which are noted here. The large green area, once the country club, is today a military airport, but the remainder of Siboney is today, as it was originally intended, an enclave of wealth. El Lago, today as then, is surrounded by fabulous mansions and lush gardens.

Country Club Park: Before and After the Revolution

The Havana equivalent of Beverly Hills, Country Club Park was developed in the 1920s by Albert Mendoza. As illustrated here, Country Club Park was designed by a collaboration of American and Cuban landscape architects for high aesthetics and commodious living. It is distinguished by enormous property lots, winding tree-lined streets, and grandiose mansions.

During the Cuban Revolution (1953 - 1959) most Country Club Park elites fled Cuba, relocating to Europe, Mexico, and, most significantly, Miami, Florida. The lavish mansions, grand hotels, and parks were repurposed by the Cuban communist elite, some as government offices, universities, and military installations, but most as the private estates of revolutionary leaders. Fidel Castro had a compound here and Siboney's current residents include members of Raul Castro's family.

This map was issued in 1924 in Havana, Cuba by the Country Club Park Investment Company. The map was intended to promote Siboney / Country Club Park real estate sales. The cartography was prepared by the agrimensor or surveyor Juan Tapia, of O'Malley and Tapia (Obispo 59, Habana) whose signature is printed on the map. It was printed by Gutierrez, a Havana based commercial lithographer. This is the only known surviving example.

Pedro Gutierrez (fl. 1900 - 1957) was a Havana, Cuba, based photographer, printer, and lithographer active in the pre-Revolutionary era. Gutierrez was well regarded as one of Havana best printers and remained active until at least 1957. Learn More...

Good. Map exhibits remargining along the. Left side as well as several fill repairs and full packing with conservator tissue.