1749 Vaugondy Map of the Mississippi River and Louisiana 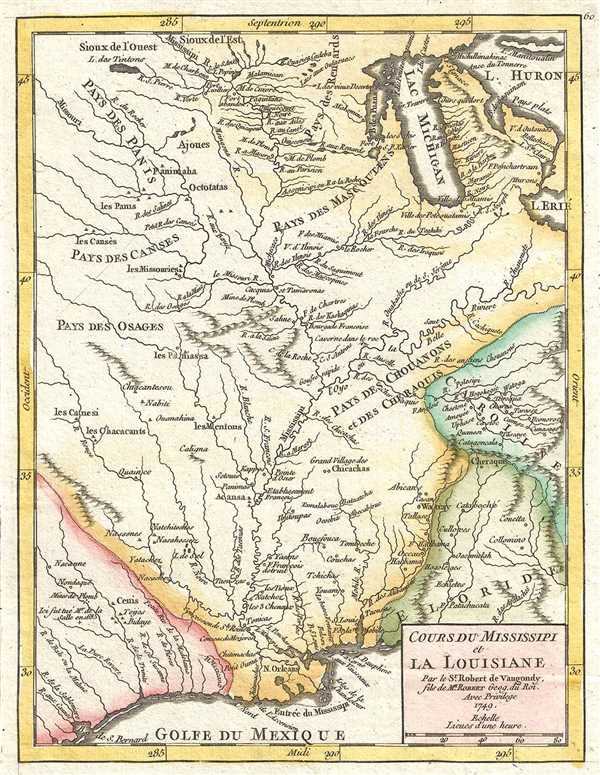 1749 Vaugondy Map of the Mississippi River and Louisiana

Uncommon map of the Mississippi River and Louisiana issued a few years before the French and Indian War.

This is a hand colored 1749 Didier Robert de Vaugondy map of the Mississippi River and Louisiana. Issued just before the French and Indian War (1754 – 1763), this map focuses on the Mississippi River, depicting from north of Lake Michigan at the top of the map south to the mouth of the Mississippi in the Gulf of Mexico in Louisiana at the bottom and from Pays des Canses and the Pays des Osages east to the Carolinas, Florida, and Lake Erie. The map presents the Mississippi River system in detail, depicting the many tributaries and confluences along its course, including the Missouri River. French forts and merchant establishments are noted throughout in an attempt to express political, settlement, and mercantile activity in the region and thereby assert land claims. Lakes Michigan, Huron, and Erie are depicted in the upper-right corner. Most of the country depicted in the map is labeled using Native American tribes, such as the Pawnee (Panis), the Cherokee (Cheraquis) and the Osage. New Orleans is labeled in Louisiana as well as Lake Pontchartrain (L. Ponchartrain). The border between Spanish-held Texans and French-held Louisiana is easily recognizable.