1584 Ortelius Map of Crete and an array of Greek Islands 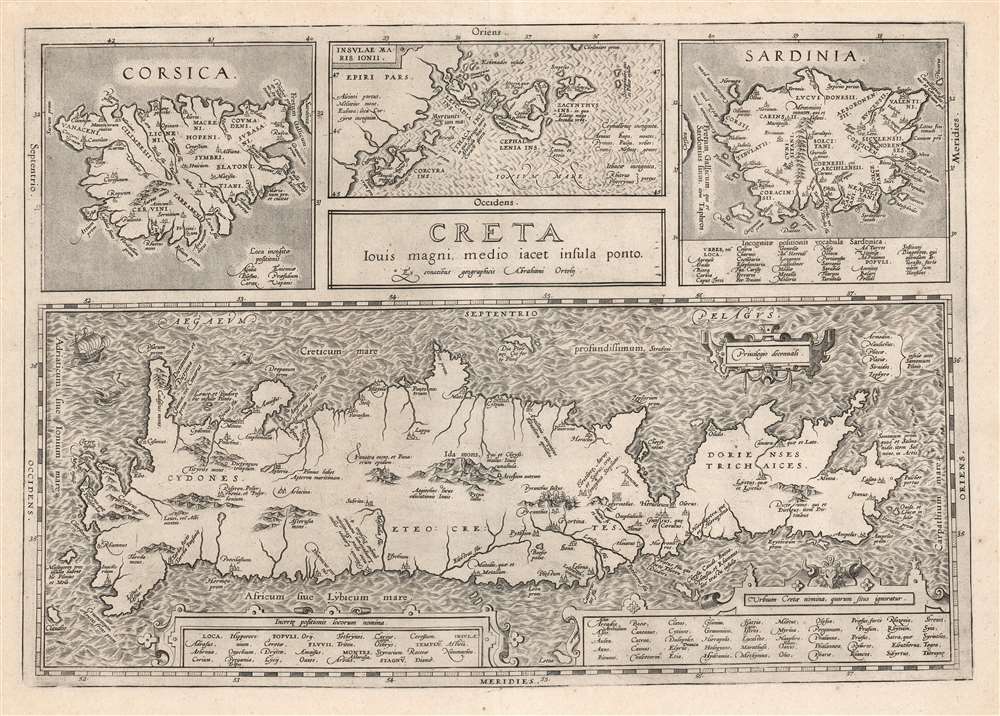 1584 Ortelius Map of Crete and an array of Greek Islands

Crete and the Greek Islands, as known to the Ancients.

This is Abraham Ortelius' 1595 map of Crete and other Mediterranean islands as they were understood in antiquity and Greek mythology. The engraving is comprised of four separate maps of Corsica, Sardinia, Crete, and the Ionian Islands.

It is among the maps Ortelius prepared for the volume of his atlas dedicated to ancient and Biblical geography, the Parergon. Although Ortelius is better known as a compiler of other geographers' maps, he was a scholar of Antiquity in his own right and many of the maps of Parergon were his own unique compositions, albeit drawing on classical textual sources such as Pliny, Strabo, Seneca, and Livy. The four maps are beautifully and distinctively engraved, some with stippled water and others (notably the Crete map) with vigorous waves. Mountains are indicated pictorially, with again those of Crete shown most evocatively. Important locations, such as the Labyrinth of the Minotaur, are marked. Lists, of cities and locations whose names were known but whose locations were not, are included on each map.

This map was engraved for inclusion in the 1584 edition of Orbis Theatrum Terrarum. This specific example corresponds typographically to the 1595 Latin edition of the work. We see perhaps ten examples of this separate map in institutional collections, although poor transcription in the recording of this map (Jovis? Iovis? Louis?) makes an accurate count difficult.