1710 Map of Crete and the Greek Islands 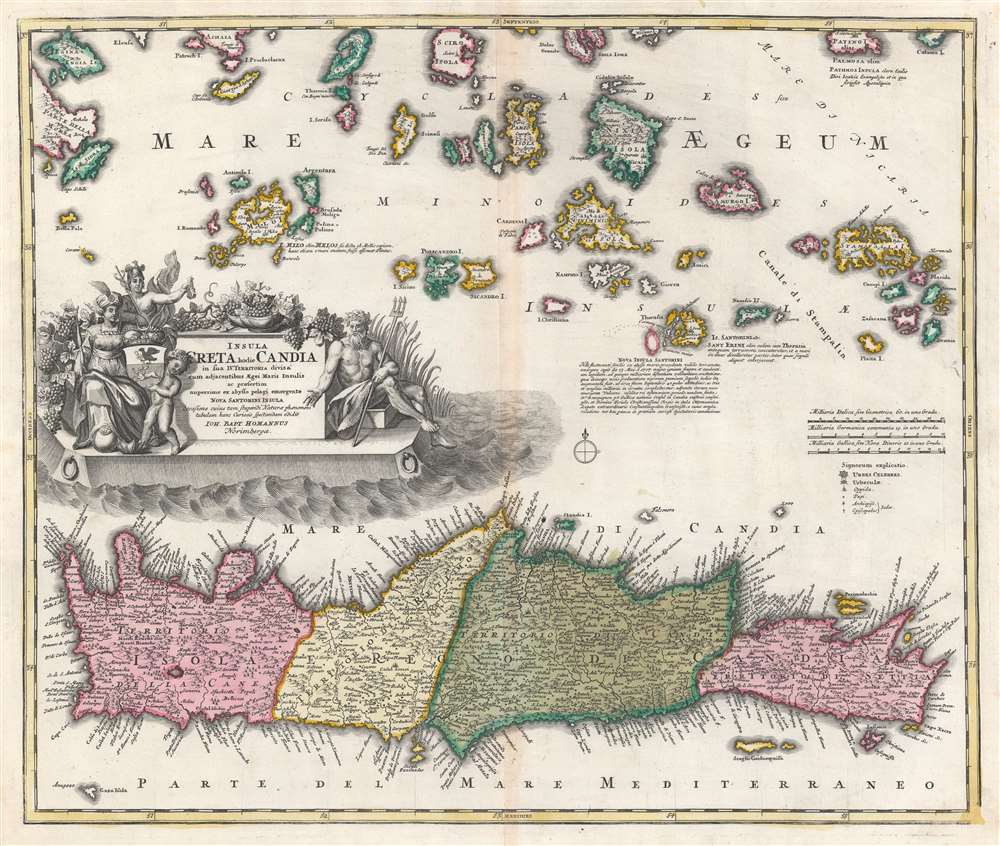 1710 Map of Crete and the Greek Islands

Eruption of a new island in the Santorini Caldera.

This dramatic c. 1710 map of Crete and the Greek Islands was engraved for inclusion in the atlases of J. B. Homann. In terms of the island's topography, it is largely based on the maps of Sanson from the prior century, but this older cartography frames fresh and astonishing information: the emergence of a new island, as part of the Santorini Archipelago.

Witness to an Eruption

The map includes a note - accompanying an illustration of the event - regarding the May 23, 1707 eruption of a volcano in the Santorini caldera, which resulted in the emergence of a new island, Nea Kameni. The event was witnessed by Lord Bourguignon - apparently the French consul to Crete. We have not been able to trace him, but his account was quoted in several missives describing the event.

The fine title cartouche is styled as a great stone pier, overflowing with bunches of grapes. To the far left is a seated, turbaned figure with a crescent-headed scepter, a reference to the island being under Ottoman control. To emphasize it, a putto presents the figure with the arms of the Kingdom of Candia. Meanwhile, Mercury/Hermes, messenger of the gods and patron of commerce, presents a purse. Neptune, god of the sea, reclines on the right side of the cartouche.

Publication History and CensusThis map was engraved sometime between 1708 and 1710 for inclusion in Homann's atlases. Certainly it was in print for the 1710 Neuer Atlas. It remained as part of Homann's repertoire, and that of Homann Heirs, well into the 18th century. The map is well represented in institutional collections in a variety of later editions.

Very good. Toning at centerfold, else excellent with a bold strike and rich original color.