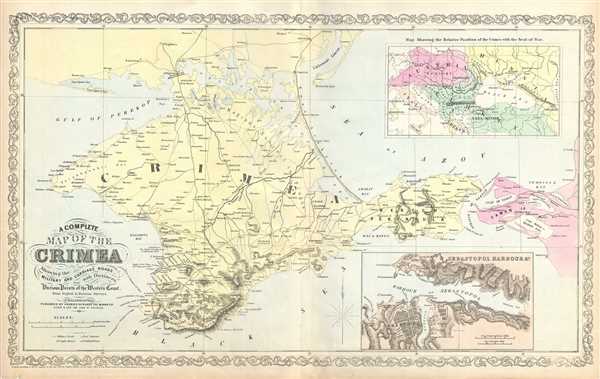 Map of the Crimean Peninsula by little known American Publisher.

This is a scarce map of the Crimean Peninsula by little known American map publisher Charles Desilver. It depicts the Crimean Peninsula during the Crimean War. This highly detailed map notes military and carriage roads throughout with distances. Towns, fortifications, lighthouses, postal stations, as well as topography are shown. An inset in the top right quadrant features the relative position of Crimea with the seat of war. Another inset in the lower right quadrant features the Sebastopol Harbor.

Sebastopol's place in history was cemented during the Crimean War. Seeking to punish Russia for its imperialistic designs on the Balkans Napoleon III and his allies, the English and Turks, invaded the peninsula, quickly taking Balaklava. The high point of the war was the legendary and disastrous 'Charge of the Light Brigade' wherein an entire British Calvary unit charged to its death against a fortified Russian position.

The plate was originally published by Samuel Augustus Mitchell, who sold the copyright to Thomas, Cowperthwait and Company in 1850. Charles Desilver in turn bought them in 1856. This map was issued in the 1856 edition of Desilver’s New Universal Atlas.

Desilver C., A New Universal Atlas Containing Maps of the various Empires, Kingdoms, States and Republics Of The World (Philadelphia), 1856.