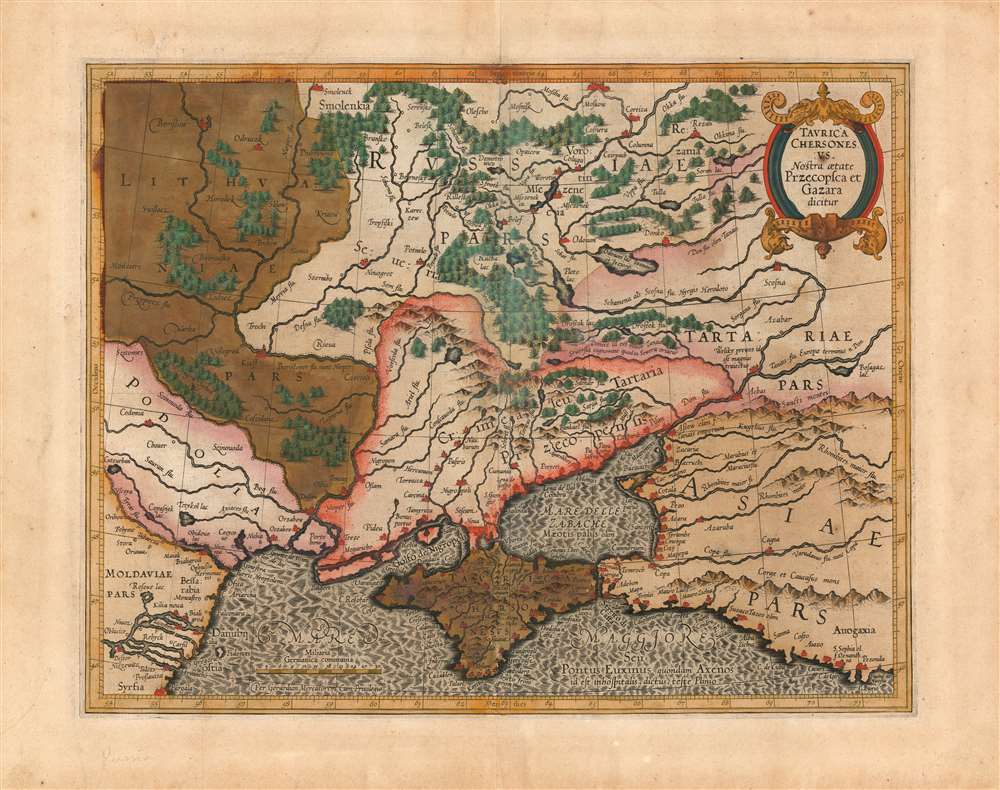 First atlas issue of Mercator's map of the lands of the Crimean Tatars.

This is the 1595 first state of Mercator's map of the Crimea, still known to geographers by its Ptolemaic name of Taurica Chersonesus. The engraving is bold and sharp - a product of the youth of the copperplate - and the rich hand color has aged to an attractive patina. Many recognizable place names can be found on this detailed map, including Moscow, Smolensk, Kiev, and Chernobyl. The primary focus of this map, however, is Russia’s extremely fluid southeastern border with the Crimean Tatars. The border garrisons of Ryazan (Rezan on the map) and the Crimea suffered yearly assaults from the steppes. Moscow’s response – the annual raising of an army of tens of thousands to patrol this border – was instrumental in developing the centralized power of the Tsar in the 16th and 17th centuries.

This map was engraved by Gerard Mercator and included by his heirs in the first editions of that geographer's atlas. The plate was acquired by Jodocus Hondius along with the rest, and it appeared in the Hondius atlas until the plate was replaced by a new map in 1636. This edition appears separately in only seven institutional collections; later issues are more common.

Mercator, G. Mercator's Atlas sive cosmographicae meditationes de fabrica mundi et fabricati figura. (Amsterdam) 1595 - 1602.     Mercator's Atlas is one of the most important works in the history of cartography. Although in fact Ortelius was the first to publish a proper atlas, the Teatrum Orbis Terrarum, Mercator's Atlas the first book to employ the term Atlas for a collection of maps. The term is derived both from the mythical titan, Atlas, who was forced to bear the world upon his shoulders, and the Libyan king, philosopher, and astronomer of the same name that, so the legend goes, constructed the first globe. Mercator dedicated the final 25 years of his life to compile the Atlas. He published two parts during his lifetime in 1585 and 1589, but the final part published posthumously by his son Rumold Mercator, in 1595. The map plates for the Atlas were later acquired by Jodocus Hondius who published the most complete and well known edition in 1606. It was Jodocus who popularized the Atlas and who did the most to elevate Gerard Mercator's work.

Very good condition. Lightly toned, with areas of oxidation. Else excellent condition with original hand color and an attractive patina.