1777 Santini Map of the Crimean Peninsula and Ukraine 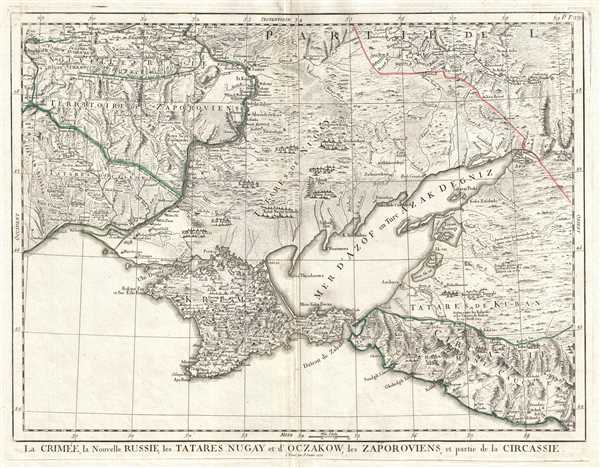 1777 Santini Map of the Crimean Peninsula and Ukraine

Historical Map of Crimea, currently a flashpoint of conflict between Russia and the Ukraine.
$600.00

This is a 1777 Paolo Santini map of Crimea and Ukraine. The map depicts from southern Ukraine (Nouvelle Russie) to the Black Sea. Crimea (Krim) is depicted in detail, with numerous settlements and towns labeled and rivers and topography included. Outside Crimea, in modern Ukraine, several different territories occupied by ethnic communities are labeled on the map, including Tatares d'Oczakow, the Territoire des Zaporoviens, Tatares de Nugay, and Circassia (Circassie), the ancestral homeland of the Circassian people. Historically, the term 'Tatars' has been applied to numerous Turco-Mongol semi-nomadic empires, but more recently, the term refers more narrowly to people who speak one of the Turkic languages. Within these regions, myriad settlements are depicted. Some of these settlements appear to be permanent, and most of these are near a river. Others, however, appear to be depicted as semi-permanent, nomadic settlements. As stated above, the Tatars were a semi-nomadic people, so this depiction is well within the realm of possibility. Along the right side, in the territory occupied by the Tatares de Kuban two historical notations about battles are included. Topography is depicted throughout the map.

In recent years, Crimea has been international news. In March 2014, the Russian Federation annexed Crimea, which was Ukrainian territory. A referendum was held, and 'separation was favored by a large majority of voters.' However, the international community does not recognize the results of the referendum as valid or the validity of Russia's military actions. The U.N. General Assembly has officially stated the policy of non-recognition and the G8 voted to remove Russia from the group and leveled sanctions against them.

This map was published in 1777 by Paolo Santini in Venice.