1603 Ortelius Map of Cuba, the Caribbean, and Northwestern Mexico 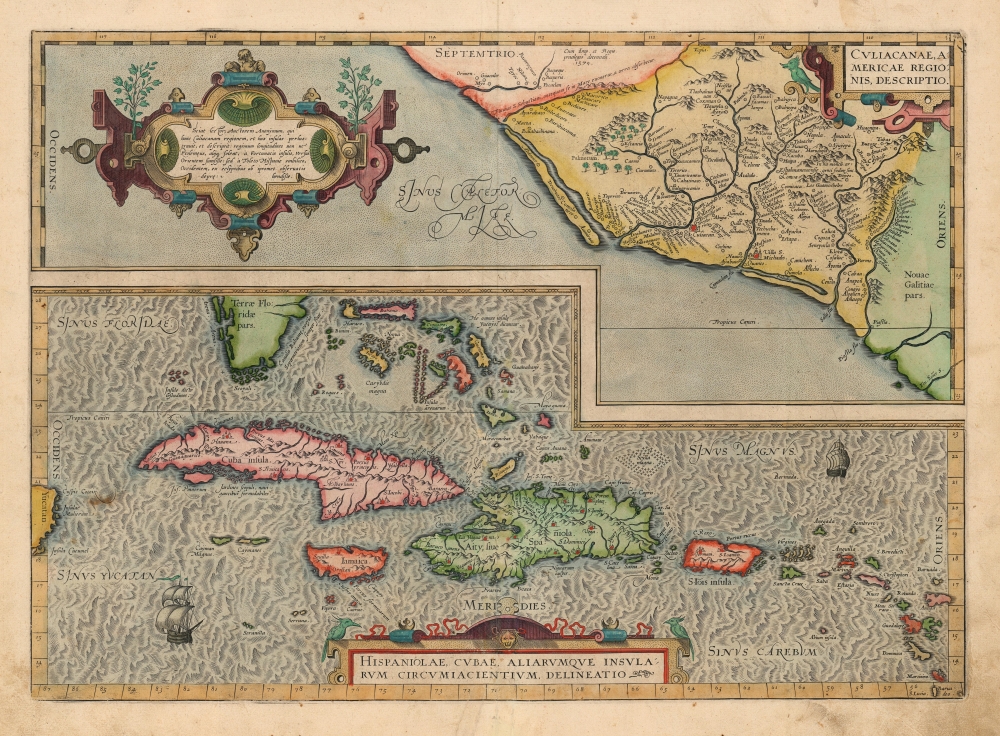 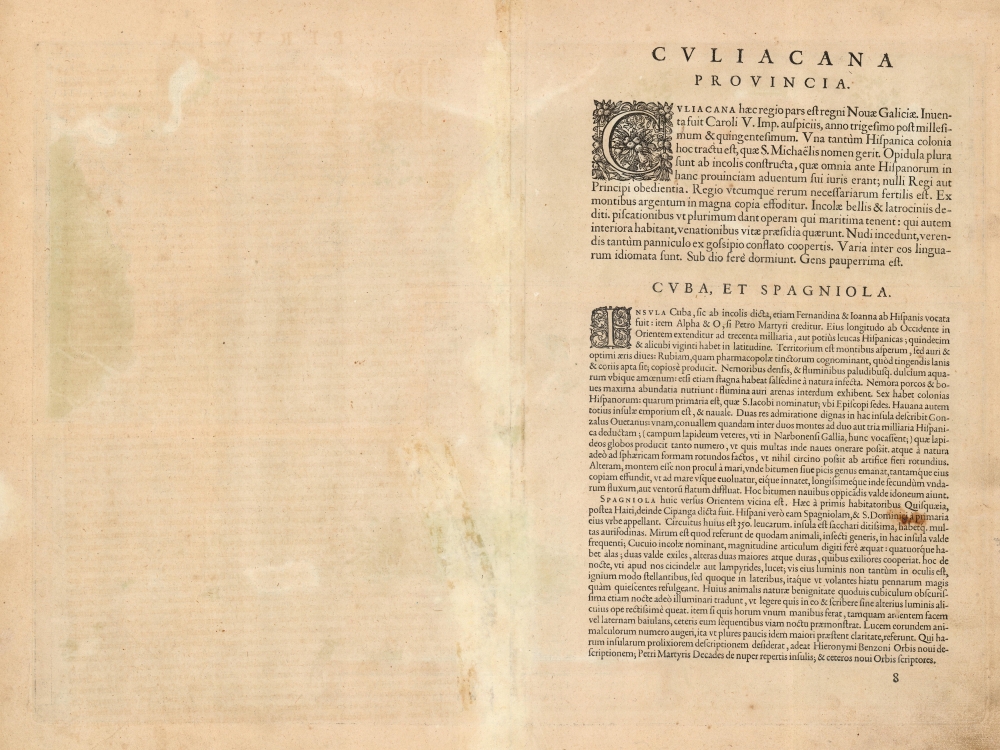 1603 Ortelius Map of Cuba, the Caribbean, and Northwestern Mexico

First Atlas Map of the Caribbean, and Northwestern Mexico.
$2,500.00

This is a beautiful, original color example of Ortelius' 1579 map of Cuba and the Caribbean, combined with his map of the Viceroyalty of Culiacan in Northwestern Mexico. Moreover, this is a Vrients edition of the map: maps from Vrients editions typically exhibit finer quality color than those printed during Ortelius' lifetime, and are consequently very desirable.

Among Ortelius' Most Original Maps

While Ortelius is generally most esteemed as an editor and compiler of maps, he was an accomplished mapmaker in his own right, and this map is among those of own composition, synthesizing data drawn from Mercator's 1569 world map, Gutierrez's 1562 America map and Alonso de Santa Cruz's 1560 Isolario (sources now unobtainable by the collector). These maps, both of essential areas of recent exploration in the New World, exemplify Ortelius' trail-blazing cartographic work.

The upper of the two maps on this sheet brings into sharp focus the Viceroyalty of Culiacán, in the modern Mexican state of Sinaloa. The modern city of Culiacán appears here as the Villa San Michaelis, which was founded in 1531 by Lázaro de Cebreros and Nuño Beltrán de Guzmán. The region had been organized under the tribe of the Tahues. Following a war of conquest, the Spanish reorganized the area into three provinces: Culiacán, Sonora, and Sinaloa. The region was further explored by Coronado and Alarcón in the 1540s. It was the furthest point north explored by Cortez in his search for the Seven Cities of Gold. The map presents a multiplicity of pre-Spanish settlements, surrounding the two Spanish colonial towns of Culiacán and San Miguel de Culiacán. Mountain ranges and palm groves appear as well.

The map of Cuba and the Caribbean is superbly detailed, and includes part of Florida, the Bahamas, and a glimpse of Yucatán. The principal cities of the islands are illustrated. The map is centered on Cuba and Hispaniola. The treacherous waters of the Bahamas islands are marked with the infamous Homeric terrors of Scylla and Carybdis, showing that the islands' perilous shallows and reefs were already infamous. The beautifully engraved oceans are decorated with two sailing ships.

The map was produced for inclusion in Ortelius' Theatrum Orbis Terrarum, first appearing in 1579 editions of the work. The first state of this map had mislabeled the Tropic of Cancer as the Tropic of Capricorn; this error was corrected in 1595; the present map is thus a second state, showing that correction. Based on the verso text, this second state example can be identified as having been included in the 1603 Latin edition of Ortelius' atlas, published posthumously under the aegis of his executor, J. B. Vrients. Van den Broecke estimates that approximately 5,875 copies of this map in all editions were printed for inclusion in Ortelius' atlas, and it is fair to assume that perhaps ten percent of these have survived in one form or another. The map is well represented in institutional collections, and it appears on the private market with some regularity, but old color examples of this quality have become difficult to find.

Ortelius, A., Theatrum Orbis Terrarum, (Antwerp: Vrients) 1603.     Abraham Ortelius' magnum opus, Theatrum Orbis Terrarum, was the world's first regularly produced atlas, which 'set the standards for later atlases . . . It was the first undertaking of its kind to reduce the best available maps to an uniform format.' (Koeman) A modestly-sized work of fifty-three maps in its first edition of May 1570, it was an immediate success: there were three further editions that year, and the work remained in print for a total of 32 editions, the last of which was 1641, well after its author's 1598 death. Ortelius added to his atlas constantly, and by 1595 the Theatrum contained 147 maps. Ortelius is renowned generally as an editor, and indeed much of the Theatrum is compiled from a variety of sources: in such cases, Ortelius was scrupulous in naming his sources. But Ortelius was also a mapmaker in his own right: many of his maps are a distillation of various sources into his own work, and there were many maps - particularly in his atlas of Biblical and ancient history Parergon - which were entirely Ortelius' work. In his role as an editor, Ortelius followed in the footsteps of Munster, whose Cosmographia was, until Ortelius, the best window on the world for the curious European reader. In terms of the artistry of his maps, Ortelius oversaw the first great flourishing of copperplate engraving in the service of cartography to occur in Northern Europe. Ortelius' work provided the model for the atlases of Mercator, Hondius, Blaeu and all their progeny in the 17th century - many of whom were to produce faithful editions of Ortelius' maps in their own productions.

Very good. Mends to bottom centerfold with no loss. Else excellent with superb original color.