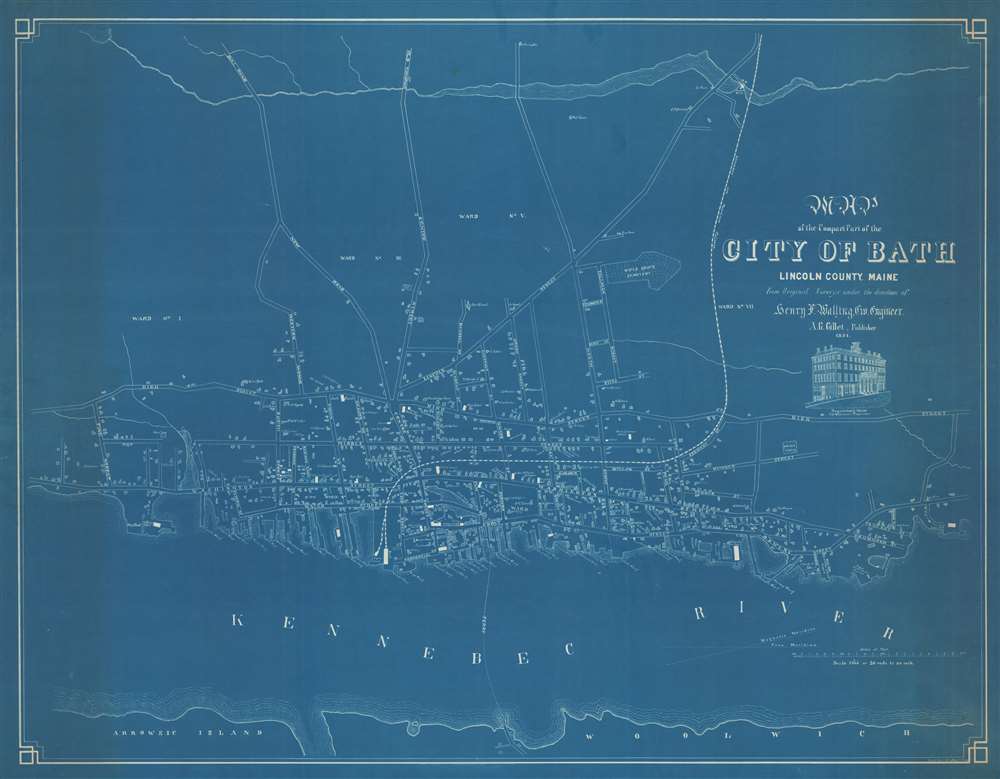 A unique find, this is a 1934 Margaret W. Harkins cyanotype print of an 1851 Henry Frances Walling city map or plan of Bath, Maine. Oriented toward the west, the map depicts the city from Pine Street to the steam mill on the banks of the Kennebec River and from Sewell's Mills on what appears to be Whiskeag Creek west of town (although it is unlabeled) to the Kennebec River. Due to this map's unusually large scale for Walling city plans, the properties of individuals in town are illustrated and identified with the owner's name along with the streets and public buildings. Nearly all the streets are labeled, as are the wharves along the Kennebec, the shipyards, churches, hotels, and schools. City wards are labeled and the Kennebec and Portland Railroad line runs to a depot on the river. The ferry crossing from Bath to Woolwhich across the Kennebec is also illustrated. A view of Sagadahock House is situated just below the title.

Cyanotype is a photo-reprographic technique developed in 1842 by the British astronomer John Herschel (1792 - 1871).  Sometimes called a 'sunprint', the technique employs a solution of ferric ammonium citrate and potassium ferricyanide, which painted on white paper or cloth, reacts when exposed to sunlight to dye the object a brilliant blue.  Areas blocked from ultraviolet exposure remain undyed and white. Herschel developed the technique to reproduce his astronomical notes, but others quickly realized that any object capable of blocking light could be used to quickly and easily create a cyanotype image.   By the late 19th century the process became popular with designers, military, architects, and engineers (blueprints), who used the cheap an effective technique to quickly and exactly reproduce images in the field.  Cyanotyping is limited in that only a single copy can be made at one time, so it was only practical for short-term field work.  It is also of note that cyanotypes remain extremely reactive to light and, over time, fade or degrade, making them extremely ephemeral.  The process fell out of fashion in most places by the 1920s, but remains in use in some parts of the world, such as India and Nepal, to this day.

This map was created by Margaret W. Harkins in 1934 as a cyanotype print of an 1851 Henry F. Walling city map or plan of Bath, Maine. No concrete census data is available as we have been unable trace Margaret Harkins, but, because it is a cyanotype, it is likely that the present example was part of a very short print run due to the nature of creating prints using this process.