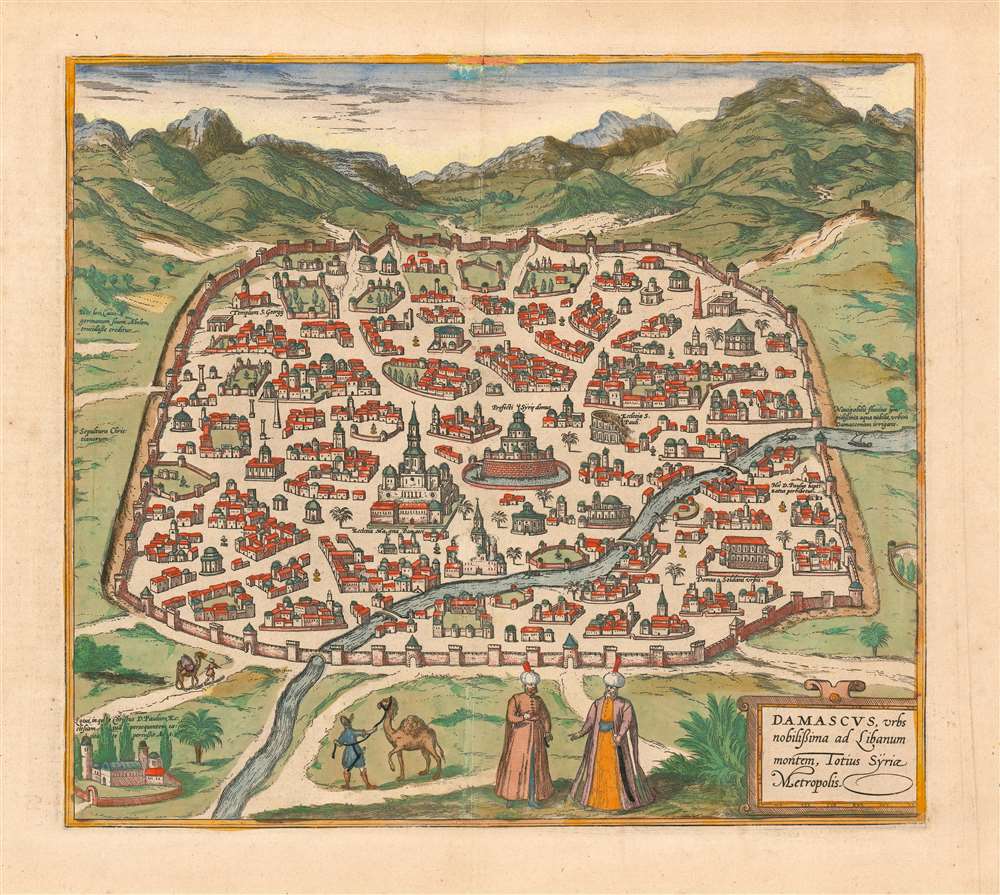 This is a superb example of the 1575 view of Damascus, produced by Braun and Hogenberg for inclusion in the second volume of their Civitates Orbis Terrarum, the first dedicated city book. The beautifully engraved view, illuminated with superb original color, is one of the earliest printed views of Damascus. It depicts the contemporaneous Muslim walled city; its mosques are prominently shown. Some churches illustrated as well, though one of these, The Church of Saint Paul, is in ruins. In the foreground, two noblemen in Ottoman styles converse; two footmen can be seen leading camels.

This view appeared in the second volume of the Civitates in 1575, and it was included in all four subsequent editions with no changes. The Latin city books are well represented in institutional collections, but French editions appear to be scarce and are poorly catalogued.

Braun, G. and Hogenberg, F. Civitatus Orbis Terrarum, 1575.     The Civitatus Orbis Terrarum is an 6-volume atlas of cities, or town book, compiled and written by George Braun, Canon of Cologne Cathedral and Franz Hogenberg. Braun and Hogenberg gathered together vast amounts of information and draft plans to produce over 500 city views/maps published in six parts between 1572 and 1617. Most of the town views and plans were engraved by Simon van den Neuvel (Novellanus) and Frans Hogenberg, many after drawings by Joris Hoefnagel. The Civitatus Orbis Terrarum was printed in Cologne, but in the Flemish style after Abraham Ortelius, the preeminent cartographer of the period. The text throughout is the work of Braun. The work proved to be a great success, reflecting the period's greater fascination with notable metropolises than with national boundaries. After the initial publication of volume 1, the popularity of the led to a second volume. In the introduction to volume 2, Braun requests that those who live in cities not represented, sent details of their own metropolises. This led to the publication of volumes 3, 4, and 5. Volume 6, the last, did not appear until 1617 under Franz Hogenberg's son, Abraham Hogenberg. The volumes include New editions Civitatus Orbis Terrarum continued to be released until roughly 1640. In general, the plates and text remained unchanged.