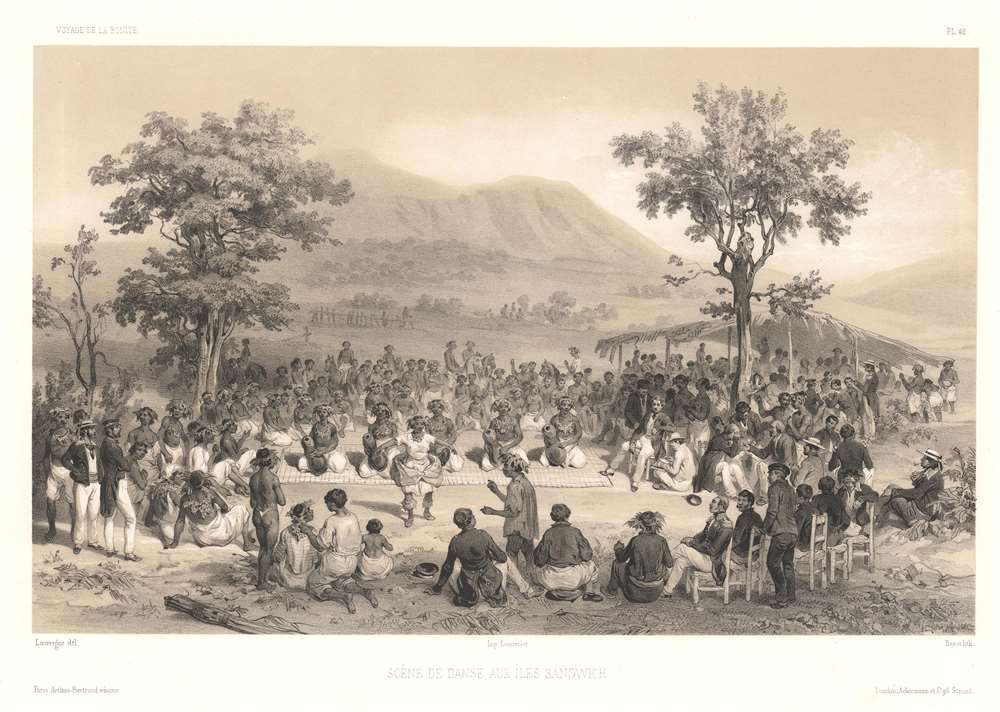 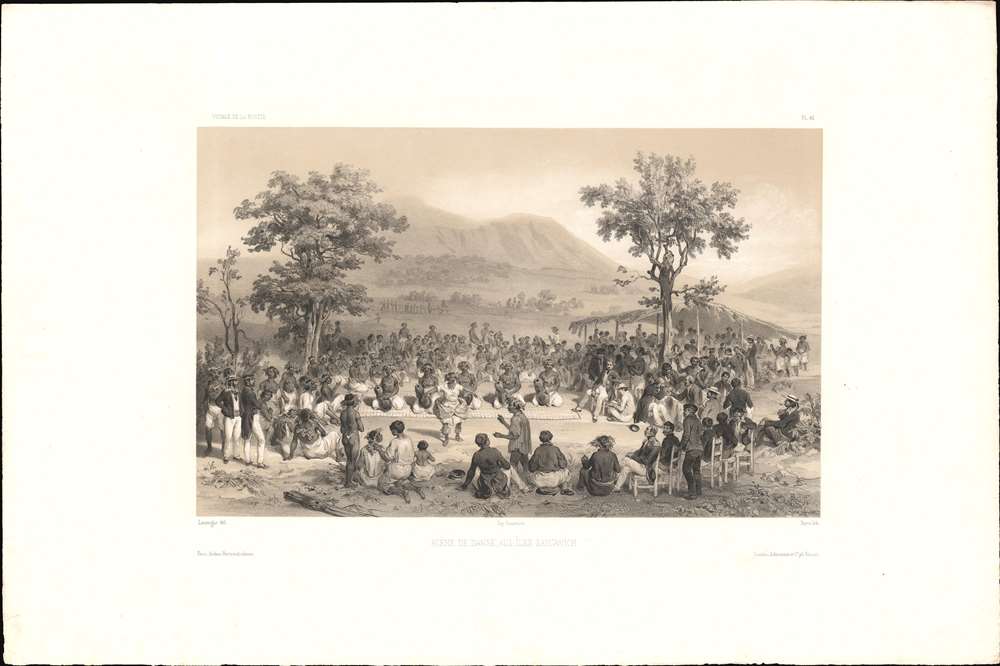 This c. 1845 chromolithograph Lauvergne view is one of the earliest representations of a Hawaiian lūʻau (luau). Hawaiians dance and feast while a crowd including crewmembers of the French ship La Bonite observe. The view was sketched by Barthélémy Lauvergne, one of the resident artists on the Bonite Expedition (1836 -1837), a French scientific and diplomatic circumnavigation.

The lūʻau, or as it is common called, luau, is a traditional Hawaiian dance and feast. The lūʻau as we know it today came into being around 1818, when King Kamehameha II (1797 - 1824) assume the throne and, as one of his first acts, voided the religious kapu (taboo) system. Under the kapu, system men and women ate and celebrated separately. To underscore his point, Kamehameha II order a public festival where he ate and celebrated with women - thus formalizing the change. Afterwards, the lūʻau became a favorite of visiting foreign dignitaries, who delighted in the exotic foods and, to their eyes, risqué dancing.

The French ship La Bonite undertook a voyage of scientific and geographic exploration in 1836 - 1837. Led by Auguste-Nicolas Vaillant (1793 - 1858), the voyage circumnavigated the globe, en route disembarking diplomats at various posts. Along the way, important observations were made that contributed to several fields, especially botany and zoology. A large account of the voyage was written upon the ship's return and divided into thematic volumes, including an album of drawings by the ship's artists, Théodore Auguste Fisquet and Barthélémy Lauvergne. Unlike Cook's voyage, the Bonite was particularly fortunate and no sailors were lost throughout the expedition.

This view was published as part of the huge multivolume work Voyage autour du monde exécuté pendant les années 1836 et 1837 sur la corvette La Bonite commandée par M. Vaillant, capitaine de vaisseau, and appears to have been part of the 99 plates included in the Album historique. It was sketched by Barthélémy Lauvergne, edited by Claude Arthus Bertrand, and printed using a lithograph technique by the firm Lemercier, Benard et Compagnie (specifically, Adolphe Jean Baptiste Bayot). It was published in London by Ackermann and Co. Because of the variety of catalogue entries for the Voyage autour du monde and the Album historique, the prevalence of this view is difficult to know with certainty. It is cataloged in the holdings of the National Library of Australia and the Album historique is cataloged in a small handful of libraries in Europe. This view is scarce to the market.