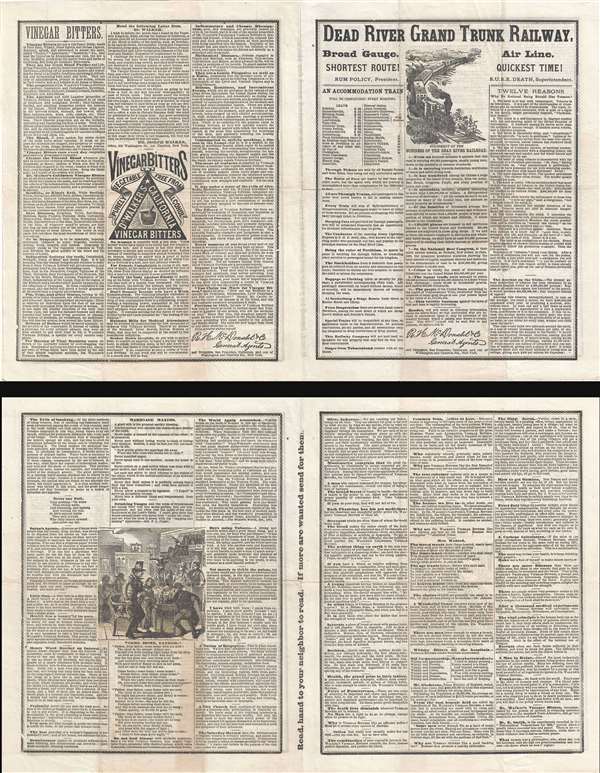 An outrageously amusing c. 1869 temperance flyer in a small folio masquerading as a train schedule for the allegorical 'Dead River Grand Trunk Railroad.' The brochure rails against the twin evils of drunkenness and tobacco smoking while at the same time promoting the health benefits of Dr. Walker's Vinegar Bitters.

The front page advertises the route from 'Sobriety' through such lovely sounding towns as Morning Dram, Sneaksville, Drunkardstown, Bloody Gape, Thieves Ally, Gamblers Causeway, Robbers Town, Desperation, Hangman's Hollows, and Suicide Tunnel, to arrive ultimately, at Perdition. As the flyer describes, on the way you are guided by the conductor of the morning 'Jersey Lightening Express' a 'Mr. T. H. E. Devil, Esq.'

It also describes the 'Business of the Dead River Railroad,' which seems bustling with some 600,000 passengers which 'squander' annually more than 1,500,000,000 dollars. In this section, there are references to the National Beer Congress of June, 1869, from which we have been able to roughly date this document.

The front page further assails smoking, calling it the 'Air Line, Quickest Time!' with 'S.U.R.E. Death' being the superintendent of that most expedient route. It argues that smoking leads to drunkenness and vice versa. Other reasons to avoid tobacco include the fact that it is 'essentially filthy' and 'ungodly' and perhaps most significantly, that 'ladies of refinement involuntarily shrink from the man who chews, or snuffs, or smokes.'

The following two pages of the flyer are full of amusing anecdotes, preaching, pseudo-scientific claims, short songs, poetry, and other commentary decrying smoking and alcohol. It also includes the following note,

It seems as if Satan were aware that his deputy, King Alcohol, was about to be deposed from his throne on this continent; and that he was making his final and terrible struggle to maintain the ascendency of his kingdom. If he can find a religious paper whose columns are for sale, he charters a department of it, and advocates the use of domestic wine as a beverage. If he can find a physician who cares more for his fee than he does for his patient, he visits him in his study; and, like the serpent in Eden, whispers in his ear the advice to use alcohol, in preference to any substitute, for medical purposes. If he can find a politician who, like the bat, is half mouse and half bird, flitting in the twilight of public opinion, he inspires him with the sentiment that temperance is poison to politics.

Further into the third page, there begin to appear comments on the health benefits of of vinegar and vinegar bitters. Near the end of the third page 'Dr. Walkers Vinegar Bitters' are specifically signaled out as exceptionally healthful.

Thus, we are led to the fourth and final page, a full advertisement promoting the miraculous health benefits and remedies achieved through Dr. Walker's Vinegar Bitters. The label of 'Dr. Walker's California Vinegar Bitters' appears at the center of the back page. The true purpose of this pamphlet, to promote Walker's Vinegar Bitter's is thus revealed. The publisher is mostly likely R. H. McDonald and Company, the general agents for Walker Bitters, who maintain offices in New York and San Francisco.

There appear to be several variations on the theme of the 'Dead River Grand Trunk Railway.' All are quite rare, and feature similar temperance invective. While the pamphlet itself is undated, we can use the date of the Beer Congress, June 1860, as a marker, for it must have been published shortly after that event.