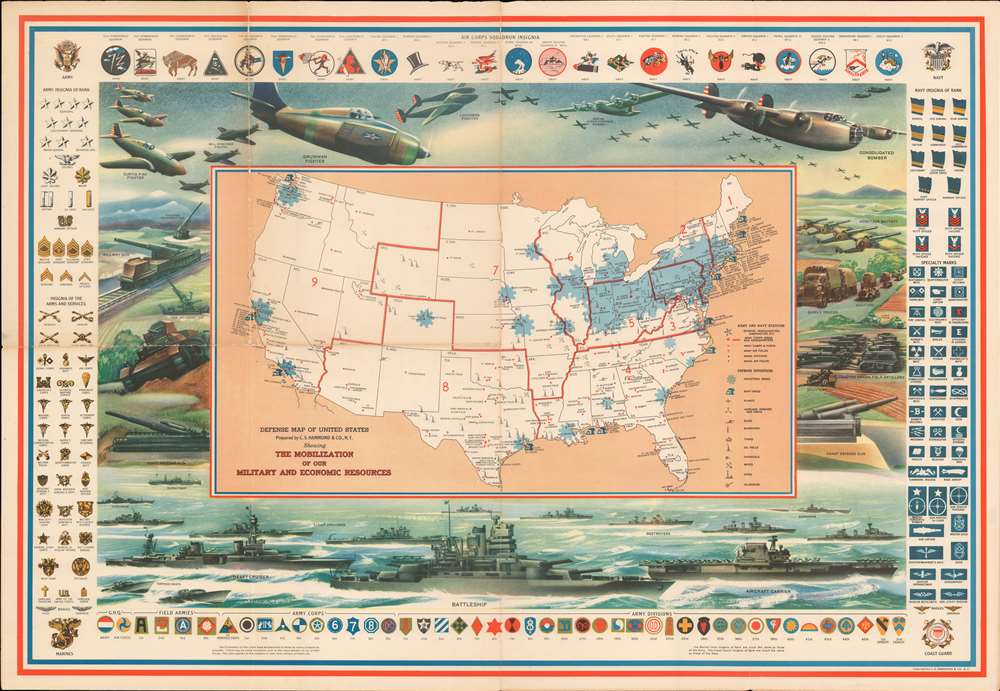 Features a visually arresting border highlighting American air, land, and sea power to be used in the coming war.
$450.00

This is a c. 1941 C. S. Hammond and Company pictorial map of the United States highlighting the military and economic resources available on the brink of World War II. Blue-colored cogs highlight industrial areas around the country to illustrate the manufacturing might that could be brought to bear. Other defense industries are marked on the map by icons, including shipyards, factories for making planes, airplane engines, munitions, tanks, guns, steel, and aluminum. Army and navy bases are identified as well, as are army and navy airfields.

The Pictorial Border - A Show of Military Force

It is the pictorial border, however, that immediately draws the viewer's attention. The air, land, and sea forces of the United States military are put on full display, creating a forceful image that undoubtedly counts as propaganda and shouts 'support the military'. Cutting edge aircraft, such as the Boeing B-17 Flying Fortress, Consolidated B-24 Liberator, Lockheed P-38 Lightning, Grumman F4F Wildcat, and Curtiss P-40 Warhawk, are prominently illustrated along the map's top border. Tanks, artillery guns, howitzers, and supply trucks along the map's two sides represent ground forces.

Good condition. Exhibits wear along original fold lines, especially at fold intersection, where there are some verso reinforcements. Exhibits some toning.