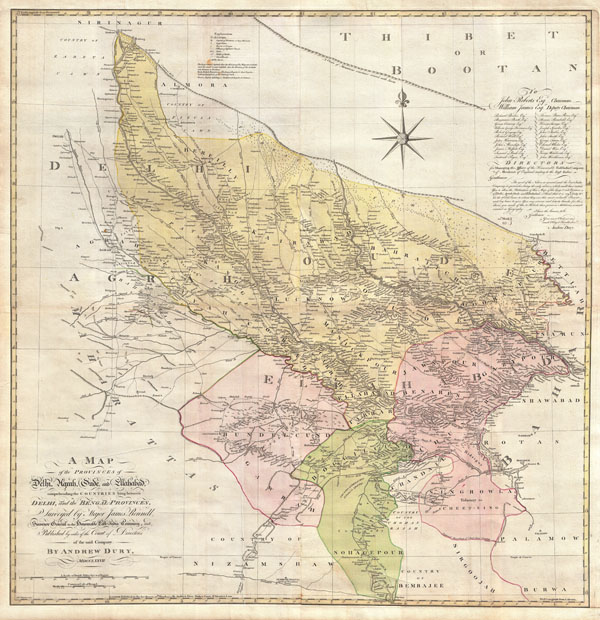 A Map of the Provinces of Delhi, Agrah, Oude, and Ellahabad, comprehending the Countries lying between Delhi, and the Bengal-Provinces, Surveyed by Major James Rennell, Surveyor General to the Honorable East-India Company, and Published by order of the Court of Directors of the said Company. By Andrew Dury, MDCCXXVII.
1777 (dated)     43 x 43 in (109.22 x 109.22 cm)

An altogether spectacular wall sized map of those parts of India near Delhi, Agra and Varanasi. Covers from Delhi in the northwest as far east along the Ganges River as Bihar and as far south as Sohagepour. Includes Varanasi (Benares), Lucknow, Gorakhpur and Faizabad among many other important Indian cities. Bounded on the north by the Himalaya Mountains and the border with Tibet and Bhutan. One of the first accurate maps of the interior of India. Laid out from primary surveys done by James Rennell, the first modern cartographer to map the interior of India. Notes cities, markets, battlefields, fortresses, roads, rivers, offers political commentary, and features some geographical references. Elaborate title in the lower left quadrant. Upper right quadrant features a dedication and letter of thanks written by Andrew Dury, the publisher, to the board of the East India Company. This is the first edition of this rare map – 1777 – as published by Dury. Later editions were published by Sayer and Bennet and by Laurie and Whittle.


Andrew Dury (fl. 1742 - 1778) was a London based engraver and map publisher working in the mid to late 18th century. Little is known of Dury's life, however, his imprint often appears on the work of a number of prominent London publishers from Sayer and Bennet to Laurie and Whittle and Gentlemans' Magazine. At some point, from 1754 to 1757, he also seems to have had an office in Dublin where he worked with John Rocque. Learn More...