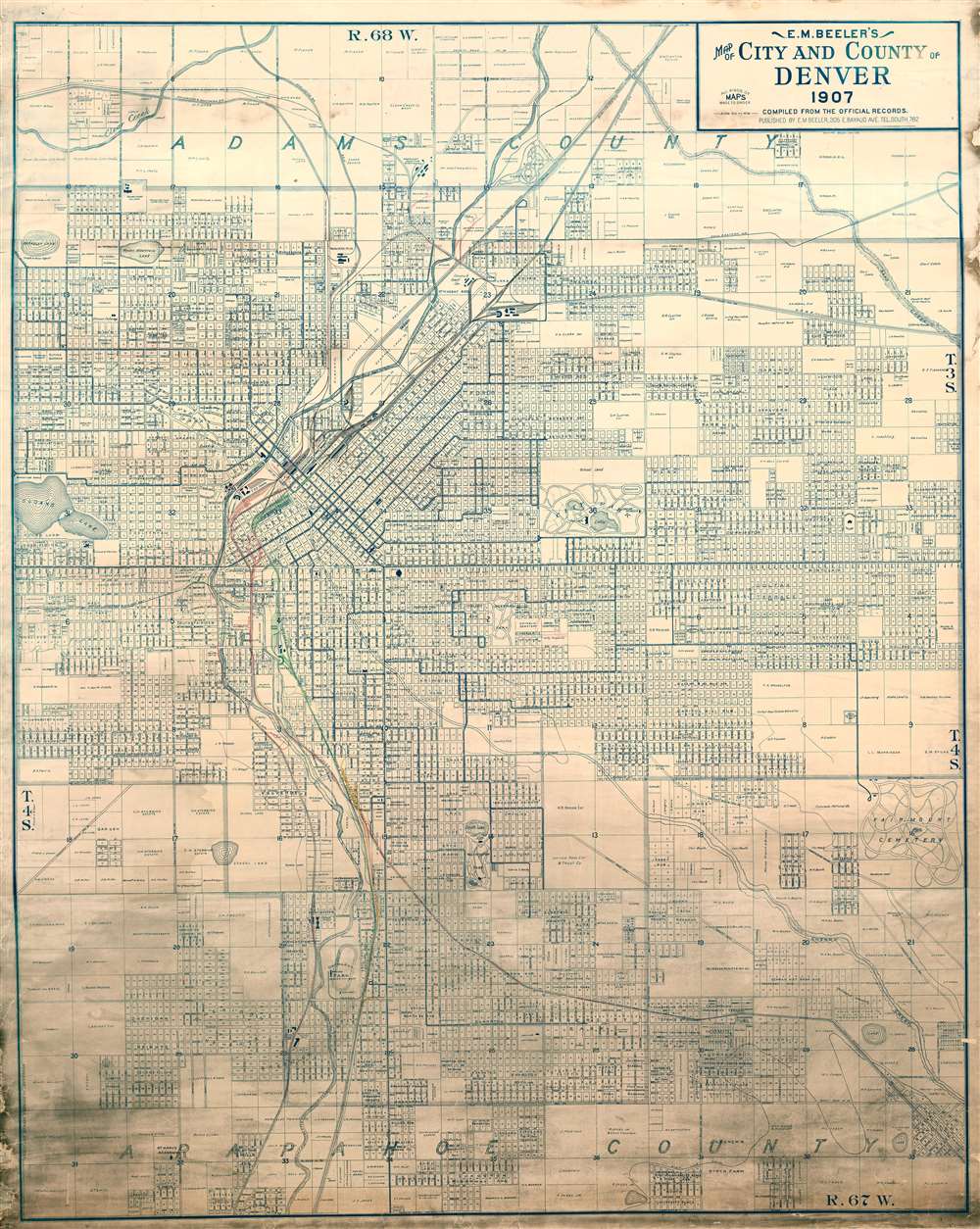 One-of-a-kind early map of Denver, Colorado, with mauscript additions relating to the city's development as a national railroad hub.
$6,000.00

An extraordinary find, this is the finest early 20th century large format wall map of Denver, Colorado, with manuscript additions relating to railroad development. Issued by Edwin Mead Beeler in 1907, the present map is a white print, also known as a reverse blueprint/cyanotype, and is without a copyright, suggesting it is a made-to-order product based upon his work for the city of Denver Board of Public Works. Appropriately, trams and trains lines are noted running in and out of the city in a broad, expansive network, giving a complete overview of the complex network of private railroad companies then operating in the Denver Colorado region.

This is an expansive highly detailed map illustrating the political, commercial, and urban development of Denver to 1907. Centered on Cheeseman Park, the map extends from Clearwater Creek to Fairmount Cemetery / Sullivan and from Sheridan Heights to Irvington and Schermerhorn Place. Throughout the map notes urbanized and unurbanized zones, including the names of investment companies and private land owners - particularly in the undeveloped districts. It further illustrates the various additions, with blocks identified numerically. Notable buildings, estates, public offices, and more are additionally noted. The underground channel of the South Platte River is also identified.

Of significance is the map's coverage of railroad lines, which have been added in meticulous manuscript. Color coding distinguishes multiple railroad networks, most of which converge on Union Station: Colorado and Southern (Red), Burlington and Missouri (Brown), Denver and Rio Grande (Green), Union Pacific (Black), Denver and Santa Fe (Yellow), and the Northwestern Terminal Railroad (Blue). The meticulously added manuscript gives a complete overview of the railroad development in Denver at a time when competing services fought to develop their parts of the city.

Beeler moved to Colorado in 1896 or 1897. It is unclear where he obtained training as a draftsman and civil engineer, but he began working for the Denver Board of Public Works in 1901, helping to plan and construct and city-wide tramway system. His earliest maps appear about 1904 and are clearly private enterprise works produced by leveraging his insider cartographic access to official maps and documents. Initially he produced very few maps. We have identified one commercial publication in 1904, his Latest Map of the City of Denver. And from 1905, a medium format internal use map detailing tram ways published in conjunction with the Smith-Brooks Company and the Denver City Tramway Company. In the same year, 1905, there is another somewhat mysterious map surviving in only one example at the Denver Public Library (CG4314 .D4 1905 .B4). We have not been able to acquire an image of that map or any substantial information on it, other than that it deals with the city's sewers. What is interesting about it is that the map is on the same scale as the current 1907 map, and probably served as a precursor to the current more commercially minded map.

Moving Toward a Commercial Map

We suspect from the above evidence that Beeler may have been involved with the mapping and construction of Denver's public sewers between 1905 and 1906. In this capacity he produced the above noted 1905 (Denver Public Library, CG4314 .D4 1905 .B4) map at an unprecedented scale of 6 miles to the inch. Recognizing he had the best available map of Denver, he sought to capitalize on it.

Beeler began, initially, to produce small numbers of white print (reverse blueprint or cyanotype) maps to order, as stated near the title of this map. The present map is the only such map to survive. The natural limitations of the whiteprint technique generally mean that very few copies could be produced - although they could be produced very quickly and economically. As such, it is safe to assume that this map is a made-to-order specialty item, of which only one or two are likely to have been compiled.

Six years later in 1913 Beeler produced Beeler's official Map of the city and county of Denver, on the same scale of 6 miles to the inch, clearly using the present map as a template. This was a far more commercial production, copyrighted twice in 1913, well-advertised in Denver publications, and potentially published in partnership with the prominent Denver map publisher George Clason (as suggested by one 1913 advertisement). This leads us to believe that Beeler may have acquired private financial backing via Clason or another investor.

Cyanotype and Whiteprint: Why so Blue?

Cyanotype is a photo-reprographic technique developed in 1842 by the British astronomer John Herschel (1792 - 1871). Sometimes called a 'sunprint', the technique employs a solution of ferric ammonium citrate and potassium ferricyanide, which painted on white paper or cloth, reacts when exposed to sunlight to dye the object a brilliant blue. Areas blocked from ultraviolet exposure remain undyed and white. Herschel developed the technique to reproduce his astronomical notes, but others quickly realized that any object capable of blocking light could be used to quickly and easily create a cyanotype image. By the late 19th century the process became popular with designers, military, architects, and engineers (blueprints), who used the cheap an effective technique to quickly and exactly reproduce images in the field. A similar technique, known as whiteprint or reverse cyanotype was also developed using the same concept. Cyanotyping is limited in that only a single copy can be made at one time, so it was only practical for short-term field work. It is also of note that cyanotypes remain extremely reactive to light and, over time, fade or degrade, making them extremely ephemeral. The process fell out of fashion in most places by the 1920s, but remains in use in some parts of the world, such as India and Nepal, to this day.

This map, as dated, was produced, probably to order, by Edwin Mead Beeler in 1907. This is the only known example. The whiteprint technique, also suggests that few could have been made, as the technique has natural limitations, so this is most likely a unique piece.

Edwin Mead Beeler (July 2, 1871 - October 18, 1931) was an American mapmaker, surveyor, businessman, and civil engineer active in Denver, Colorado and New York City, in the early late 19th and 20th centuries. Beeler was born in Cincinnati, Ohio. As a young man he worked as a driver in Cincinnati before taking a clerkship at the Cincinnati offices of the Northern Assurance Company. He remained in this position until about 1895, when he became a 'manufacturing agent.' In search of a better life in the west, he relocated to Denver, Colorado in 1896 or 1897, where he appears in the City Directory as a draughtsman and civil engineer in the employ of the city's Board of Public Works. Given his later career and the content on some of his maps, we suspect Beeler was working on the Denver's tramways. Beeler's earliest maps appear around 1904, all of which focus on Denver. In a rare map, surviving in a single known example, from 1907, he advertises that he makes 'All Kinds of Maps to Order', from his offices at 305 E. Bayaud St. Some are clearly private enterprise, as they contain advertising, others are official-looking maps. He formally established the 'Beeler Map Company' in 1913, when he copyrighted his Official Map of the City and County of Denver, a large format wall map of Denver issued in whiteprint or reverse cyanotype, possibly issued with the support of Denver mapmaker George Clason. Sometime between 1921 and 1930 he relocated to New York City, presumably to retire, but in the 1930s census he is still listed as a 'Street Car Engineer.' Beeler died in 1931 and is buried in Scarsdale, Westchester, New York. Learn More...

Good. Some edge wear and verso reinforcement. Some discoloraiton to paper in lower quadrants.