1753 Bellin Map of The Straits of Magellan, Chile, South America 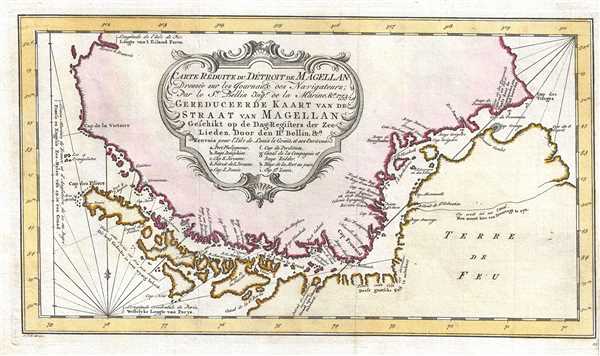 1753 Bellin Map of The Straits of Magellan, Chile, South America

Bellin's beautiful map of the Straits of Magellan.

This is a beautiful 1753 Bellin map of the Straits of Magellan, South America. It covers the important strait located at the southern tip of the South American mainland, just north of Tierra del Fuego. Extends from Cap des Vierges to Cap de la Victoire. The map renders the region in detail, noting the coastlines, capes, harbors, islands and other important topographical features.

The Strait of Magellan was discovered by the Portuguese sailor Ferdinand Magellan, the first explores circumnavigate the globe, in 1520. This natural channel linking the Atlantic and Pacific Oceans though a challenging route to navigate (given the unpredictable winds and currents), is the fastest connection between the two oceans.

The map includes a beautiful rococo style title cartouche with titles in French and Dutch. Below the title, the cartouche includes a key to the 9 locations marked on the map. Issued by Bellin in 1753.