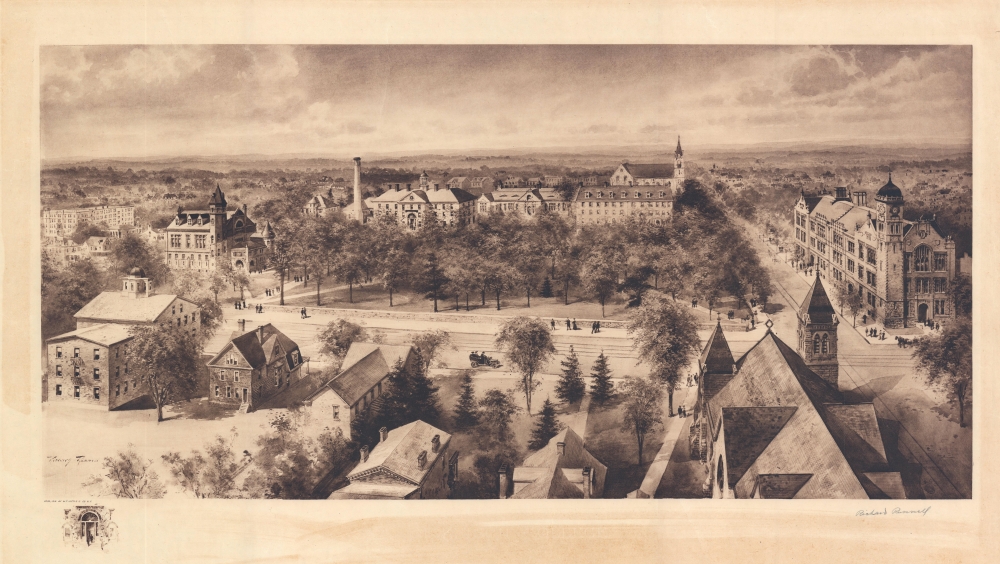 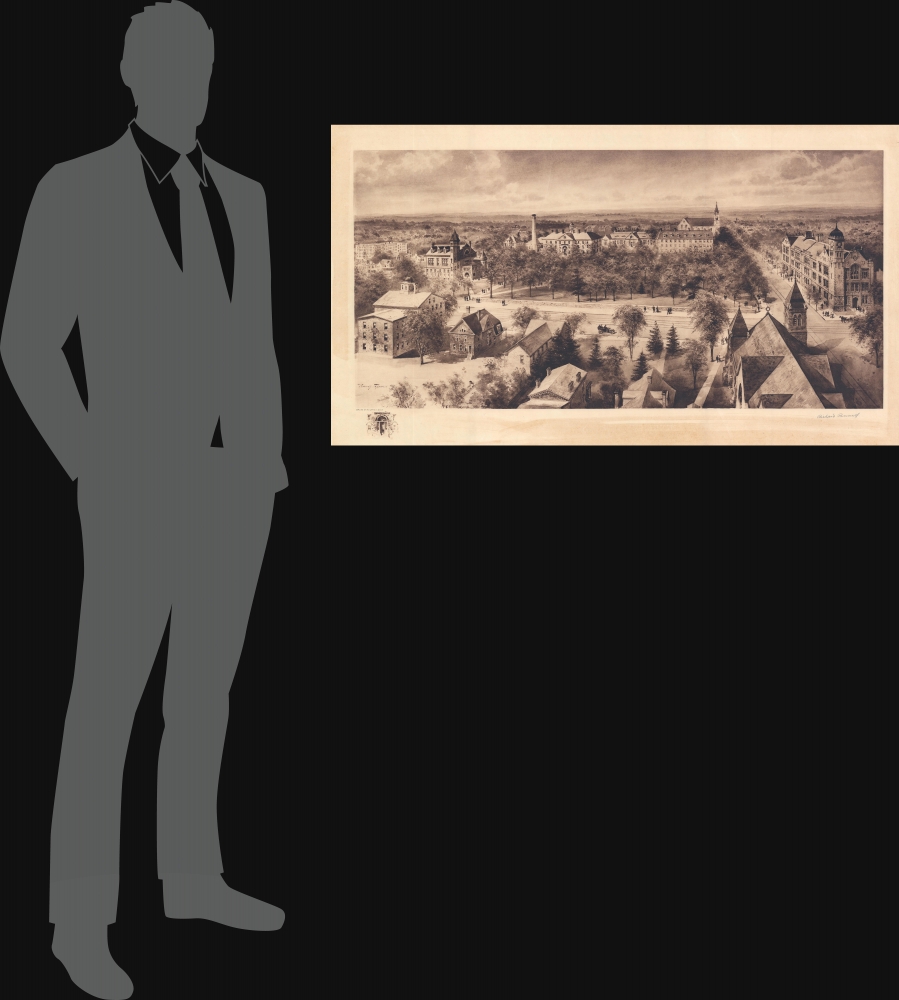 This is a scarce, 1910 Richard Rummell view of Dickinson College, in Carlisle, Pennsylvania. The sepia coloring of this print is consistent with other first editions of Rummell's views. The presence both of the Littig imprint and also Rummell's hand signature reinforces the assessment of this as a first edition. Moreover, the presence of only tracings of the view's title, just discernible in the bottom margin, indicates that it is likely a printers' proof.

Founded in 1773 as Carlisle Grammar School, Dickinson would become in 1783 the first college to be founded after the formation of the United States - and at its foundation, the furthest west of any college in the country. The view is centered on the park at the juncture of West High Street and North West Street. Although the College has grown over the intervening century, this view of Dickinson's main campus displays Denny Hall, Old West and East College, and the Tome Scientific Building (renamed in 2001 the Stern Center). Also shown is Bosler Hall, prior to its midcentury renovations. Despite several college closings in its history, Dickinson remains active. Famous alumni include James Buchanan, the 15th president of the United States; Roger Brooke Taney, the 5th chief justice of the United States; and Henry Clarke, developer of the Klondike Bar.

Rummell was an American landscape artist known for his drawings of American universities. At the turn of the century, Littig and Company commissioned Rummell to prepare watercolors of some of the nation's most prestigious colleges. From these watercolors, copper-plates were engraved, and a limited number of engravings were issued. Most of Rummell's university views are strikingly similar in style, reveling the entire campus in panoramic splendor. The views are uniformly issued from an altitude of about 300 feet, suggesting the Rummell most likely worked from a balloon. Although modern restrikes of Rummell's college views taken from the original printing plates can be found, the original printings have become extremely rare - particularly proof states such as this. We find no examples of the Dickinson College view in OCLC.

Richard W. Rummell (1848 – June 4, 1924) was an American artist active in Brooklyn during the late 19th and early 20th century. Rummell was born in Canada, the son of German immigrant Frank X. Rummell and his wife Eliza Rummell. He immigrated to the United States as a youth settling with his parents in Buffalo. He relocated to Brooklyn when he was in his mid-30s, setting up an illustration office at 258 Broadway in Manhattan. Rummell is best known for his series of views of American colleges completed around the turn of the century. Since Rummell's views universally appear to be drawn from an altitude of about 300 feet, it has been speculated by many art historians that he worked from a balloon. Rummell was also a bit of a futurist and among his more interesting works are a series of speculative images of the New York of tomorrow, with vast airships, trains running over the tops of skyscrapers, and elegant sky bridges throughout. In the 1950s, the original printer's plates for many of Rummell's university views were rediscovered in a Brooklyn warehouse. They were auctioned and sold to Arader Galleries, which today issues 'limited edition' reprints of his more desirable university views. Rummell's Brooklyn home was located at 45 Bay 28th Street and later 73 Hanson Place. In addition to his work as a visual artist, he was an accomplished actor and an avid yachtsman. He founding member of the Bensonhurst Yacht Club, where his yacht, the Careless was usually docked. He was also a member of the Royal Arcanum fraternal order. Rummell was survived by his wife, Emmeline Rummell, daughter, Chrissie Atkinson, and two sons, John Tribel Rummell, and Richard Rummell Jr., who became a famous Florida architect. Learn More...

Very Good. Overall toning.
Looking for a high-resolution scan of this?