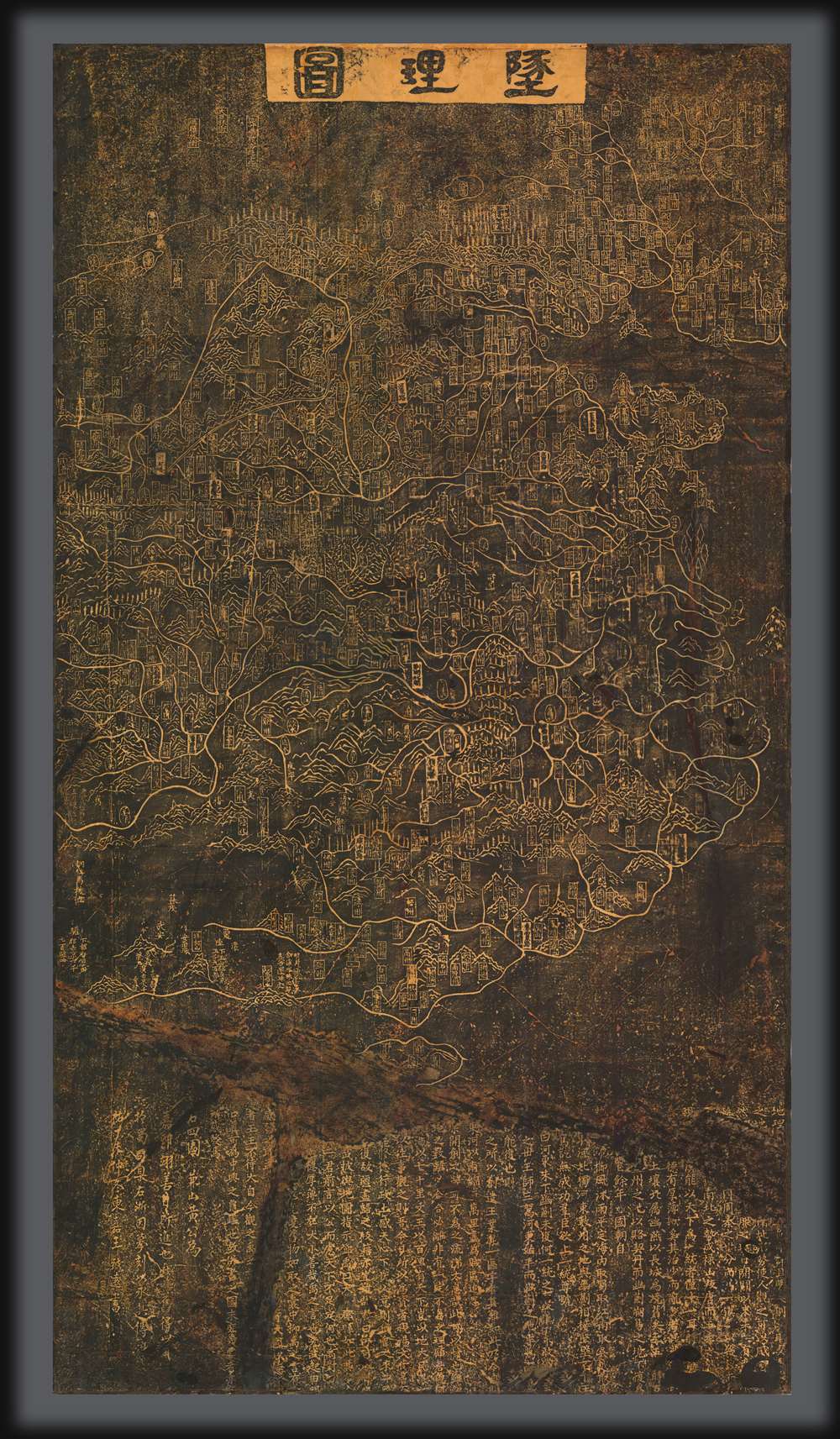 An outstanding discovery, this is the legendary c. 1247 Dili tu (墬理圖) terrestrial map of China. This is the earliest surviving example of one of the earliest known maps of China produced in the Common Era. The map was drawn by the Chinese polymath Huang Shang (黃裳). Huang's original wood carving, produced around 1194, has long been lost but the map was engraved in stone in 1247 by Wang Zhiyuan (王致遠). This rubbing comes from that stone and dates to sometime between 1493 and 1602 - making it the oldest known extent rubbing of the Dili tu of China. The present map has been carbon dated as having been created between 1493 and 1602, with supplementary ink testing verifying the results (these documents are available upon request and accompany the item).

This map was produced during the early years of the Southern Song Dynasty (南宋, 1127 - 1279), a period of political and economic decline. The Song lost control of northern China to the competing Jurchen-led Jin dynasty in 1127. Driven south, the Song established a new capital in Lin'an (Hangzhou), becoming known thereafter as the Southern Song. In the same year, this map was presented before the Song court. In 1194, the Guangzong Emperor (1147 - 1200) was forced to abdicate in favor of his much younger brother, who became the Ningzong Emperor (1168 - 1224). It is not clear which Emperor this map was presented to, but we believe it to have been Ningzong for his ascension.

The map illustrates 368 prefectures, 623 military bases, 73 rivers, 27 lakes, 180 mountains, and 24 passes, but refrains from delineating state or national boundaries - thus presenting China as a cohesive whole. The map presents an aspirational, undivided vision of China, extending from the Great Wall and Manchuria to Hainan Island (Taiwan may be present as an unlabeled mountain off the east Coast of China in roughly the correct position). It was an object lesson for the young emperor - this is what China was under your ancestors, and this is what it must be again. Period reports identified three educational maps that traveled with the Emperor: this map, a terrestrial chart, and a third urban plan, possibly of the city of Suzhou.

Like many Chinese maps, the present one is presented not just as a geographical document, but as an education in history. As Yee points out, the Dili tu shows the capitals of the Northern Song (960 - 1126) and Liao dynasties, both of which had been lost to the Jin. Elsewhere, a note mentions Guangwudi (r. 25 - 57), restorer of the Han dynasty (206 BC - 220 CE). By highlighting the losses of previous rulers, the map was intended to educate the new ruler on the extent of his lands, encourage the expansions he should undertake, and instill reverence in his forbears.

The colophon of the map features Huang's own call for Chinese reunification,

It has long been the case that the territory of the Central Plains included Yan in the north, with the Great Wall marking the boundary. It was only during the Five Dynasties the Shi Jingtang abandoned the Sixteen Prefectures, and offered them to the Khitans. It has been over three hundred years, and [this territory] has yet to be return to our possession … And now, east of the passes and south of the Yellow River, a myriad miles of contiguous territory are in rebel hands …. How can one not shed tears and sigh deeply because of this? This surely fills one with indignation!

This quote underscores the cultural aspirations of the Southern Song and is consistent with the work of other period poets and scholars who also called for reunification.

The Dili tu is the third oldest surviving map of China. It follows the 1136 Hua Yi Tu (華夷圖) and the 1137 Yu Ji Tu (禹跡圖). Of these two, it is more similar to the Hua Yi Tu, in the sense it is a terrestrial map. The Dili tu exhibits additional sophistication, including the naturalistic incorporation of topography and political place names, which are in cartouche form. The coastline and the Shandong peninsula are more advanced and accurate than on the 1137 map - although this itself is not significant. One of the many scholars who has studied this map, Aoyama, considers that in all its essentials, the contents and style of the Dili tu date to Shen Kuo’s time, a century earlier than the initial creation date of ca. 1190.

The Dili tu was presented in 1194 to the Southern Song Ningzong Emperor by the Confucian scholar and tutor Huang Shang (黃裳). In 1247, more than half a century later, Wang Zhiyuan (王致遠) engraved the map on a stone stelae, which survives at the Museum of Engraved Stone Tablets in the Confucian Temple in Suzhou (苏州文庙). A few rubbings were made of the map, most of which date to the 19th century, when the government authorized limited rubbings. Today it is forbidden to produce new rubbings for fear of damaging the stones, making this not only one of the few surviving rubbings outside of China, but also the oldest by some two centuries. While we have heard reports of a later 19th century example appearing at auction in Japan, no other example of this antiquity is known. This map is owned jointly by Geographicus and Barry Ruderman.

Huang Shang (黃裳, 1146 - 1194) was a Chinese official, tutor, polymath, and cartographer of the Southern Song Dynasty. He is known for at least three maps, the Dili Tu (墬理圖) terrestrial map, the Tianwen tu (天文圖) star chart, and a third relief map now lost. It is likely he made others. Huang became the tutor of the Chinese prince, possibly Zhao Kuo, in 1190. He presented a map of the empire carved in wood to the prince - the Dili Tu. Huang intended for the Dili Tu to teach the value and importance of reuniting the empire which was split between the northern Chinese dynasties and the Southern Song sixty years earlier.