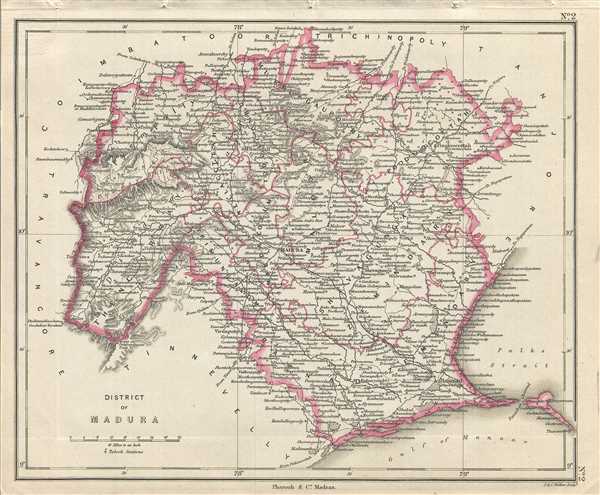 This is an lovely 1854 map of the District of Madura in the modern day state of Tamil Nadu, India, issued by Pharoah and Company. It depicts the district from Shorungoody (Surangudi) north to Coimbatore District. Includes important towns including Madura (Madurai), Dindigull (Dindigul), Poodoocottah (Pudukkottai), Ramnad (Ramanathapuram), etc. The map also notes important roads, lakes, rivers and topography.

Centered on Madura or Madurai, the region was originally part of the Pandya kingdom and over the years has been ruled by the Pandyas, Cholas, Delhi Sultanate, Madurai Sultanate, Vijayanagar Empire and finally by the British East India Company, under whose rule the district was created. Madurai, known to be one of the oldest continuously inhabited cities in the world (since the 5rd century BCE), shows evidence of Roman trade links dating back to 300 BCE. Today, the city is famous for the historic Meenakshi Amman Temple and the Thirumali Nayak Palace.

This map was engraved by J. and C. Walker and issued as plate no. 2 by Pharoah and Company in their 1854 Atlas of Southern India.