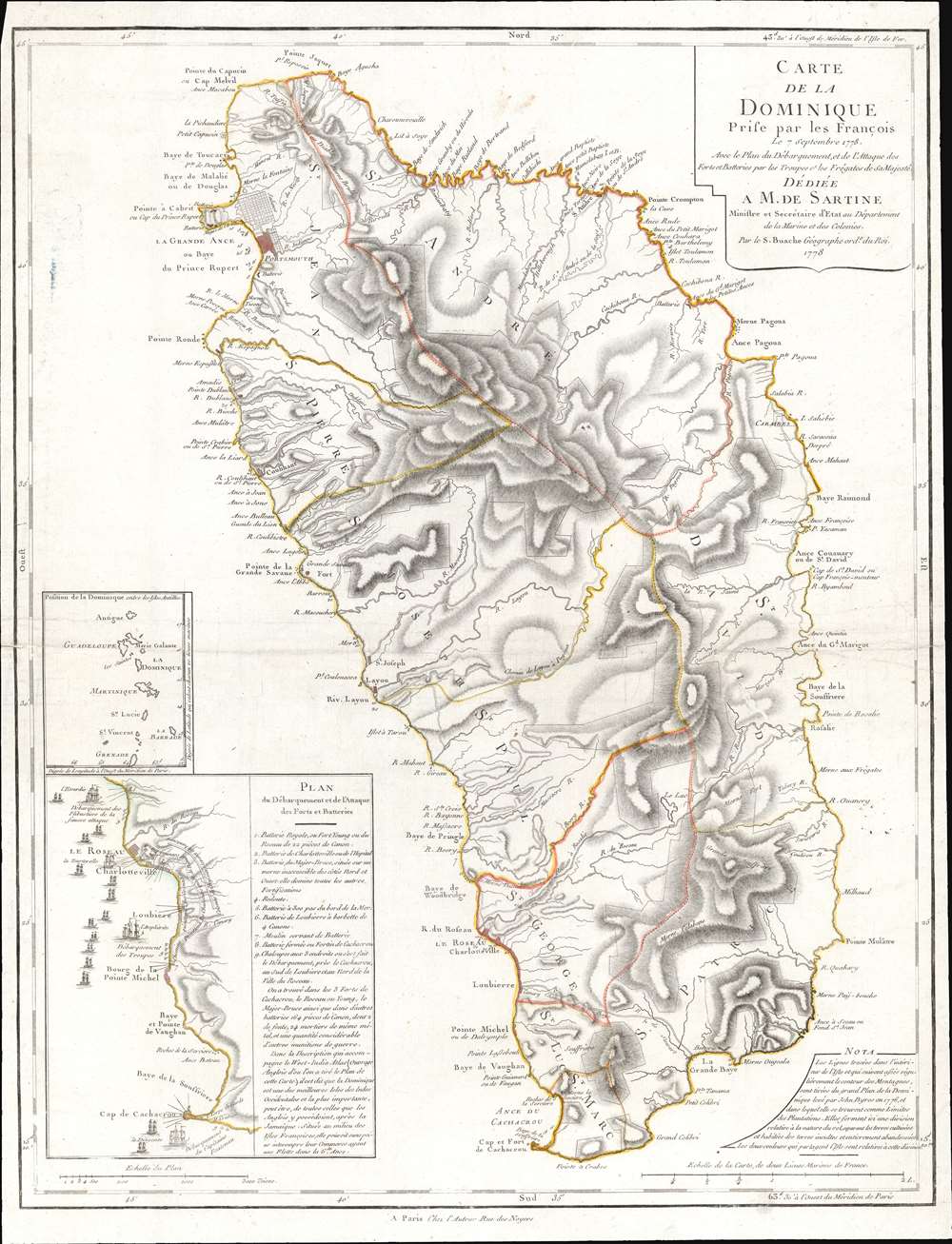 French invasion of Dominica during the American Revolutionary War.

This is a 1778 Phillipe Buache map of Dominica. An inset situated on the lower left details the September 7, 1778, French invasion of the island, complete with illustrations of the French fleet and British defenses. The large central map depicts the entire island, illustrating the island's coastline and labeling bays, points, and other coastal features. The two largest settlements, Le Roseau (the colonial capital) and Portsmouth are both labeled, along with several smaller villages. Rivers snake their way from the island's central mountains to the ocean, and a handful of roads make their way across the island.

The 1778 French invasion of Dominica

France entered the American War for Independence after the Battle of Saratoga in October 1777 on the side of the nascent United States. The French governor of the West Indies, François Claude Amour, marquis de Bouillé, received word of the declaration of war on August 17, 1778, before the British forces in the region knew. He immediately began planning to recapture Dominica, which the French had lost to the British during the Seven Years' War. According to Amour, 1,800 French troops and 1,000 volunteers left Martinique the night of September 6, 1778 (some British sources assert the French force numbered over 4,500), and arrived the following morning. The landings faced extraordinarily little resistance, and the French quickly captured the British battery at Cachacrou. They then moved to control the high ground around the capital, Le Roseau, which they secured by noon that day. The British colonial governor signed terms of surrender at about 3:00 that afternoon. The British and French continued to skirmish in the Caribbean for the rest of the war. Several islands changing hands and de Bouillé was involved in much of the fighting. Dominica remained in French hands until 1784 when it was returned to the British as part of the 1783 Treaty of Paris.

This map was created and published by Philippe Buache in 1778. The OCLC catalogs examples as being part of the collections at Yale University, the Library of Congress, the Sachsische Landesbibliothek in Dresden, the Bibliothèque nationale de France, the Bayerische Staatsbibliothek in Munich, and the University of Bern.


Antoine de Sartine (July 12, 1729 - September 7, 1801) was a competent, ruthless, and extravagant figure who dominated Paris for nearly 15 years. Formally Antoine Raymond Jean Gualbert Gabriel de Sartine, comte d'Alby, Sartine was born in Barcelona, Spain, the son of French financier Antoine Sartine. Upon the death of his mother, young Antoine was sent to Paris to be educated in Law. Following his studies, Sartine purchased the commission of Criminal Lieutenant of Police and was subsequently ennobled. A favorite of the King, he was soon appointed Lieutenant General of Police in 1759. This effectively made him dominant local power in Paris. Despite his purchased commission, Sartine proved to be a competent and effective city administrator. Paris flourished under his care, he restored public buildings, founded schools, improved finances, and tempered police corruption. He was also head of the French Intelligence organization, at the time the envy of Europe, and reported daily to the King with all of the city's gossip and scandals. This earned him the 1775 commission of Secretary of State for the Navy and the honorific rank of Minister of State. Sartine proceeded to expand and advance the French navy in competition with England. His influence put the French in a position to aid the American Revolutionaries against the British at the close of the Revolutionary War. It was during his tenure as head of the French Navy that Sartine ordered the creation of numerous updated nautical charts. Sartine's expansion of the Navy was reconsidered and deplored for its depletion of the French national treasury. As a result he was dismissed with honors in 1780. Following his dismissal, M. Sartine remained in Paris until the outbreak of the French Revolution. Unpopular with the French citizenry for his work as Police Lieutenant, he wisely fled to his childhood home of Barcelona, Spain. This no doubt saved his life as his son, who chose to stay behind, was shortly thereafter arrested and condemned to execution. Antoine de Sartine died in Tarragona, Spain in 1801. Learn More...