1854 Pharoah Map of Aurangabad and Jalna Districts in Maharashtra, India 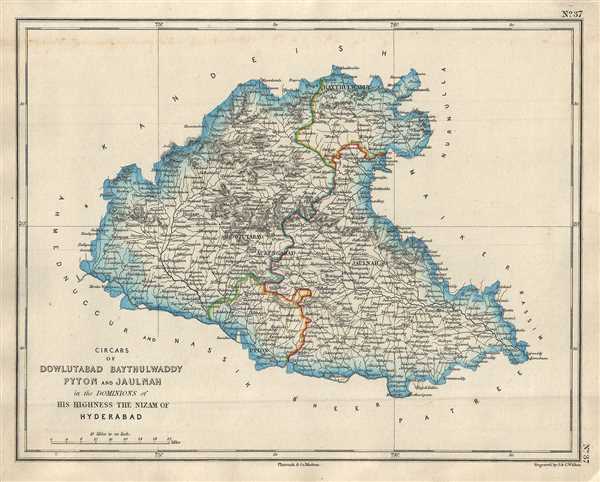 1854 Pharoah Map of Aurangabad and Jalna Districts in Maharashtra, India

Map of the Jalna and Aurangabad districts of Maharashtra, home to the ancient Ajanta and Ellora caves.
$250.00

This is a nice map of the Jalna and Aurangabad districts in the Indian state of Maharashtra. The map was issued by Pharoah and Company in 1854 and depicts the region when it was divided into the circars or sarkars of Daulatabad, Baythulwaddy, Paithan and Jalna under the Nizam of Hyderabad. It notes important towns, rivers, roads, and topography and extends from Paithan north to Ajanta, home to the famous rock-cut Buddhist cave monuments from 2nd century BC, Ajanta Caves. The Ellora Caves, 34 caves consisting of Hindu, Buddhist and Jain temples dating from the 5th – 10th century can also be found in this region. Ellora is identified here located just north west of Daulatabad.

Circars or Sarkars were historical division of a province used in the Mughal states of India. The regions of Daulatabad, Baythulwaddy, Paithan and Jalna were part of the princely state of Hyderabad from 1724 to 1948, until the Nizam was overthrown by the Indian Armed Forces following its independence. Aurangabad briefly came under the Maratha rule from 1795 to 1803 before it was returned to the Nizam under the protection of the British East India Company.

This map was engraved by J. and C. Walker and issued as plate no. 37 by Pharoah and Company in their 1854 Atlas of Southern India.