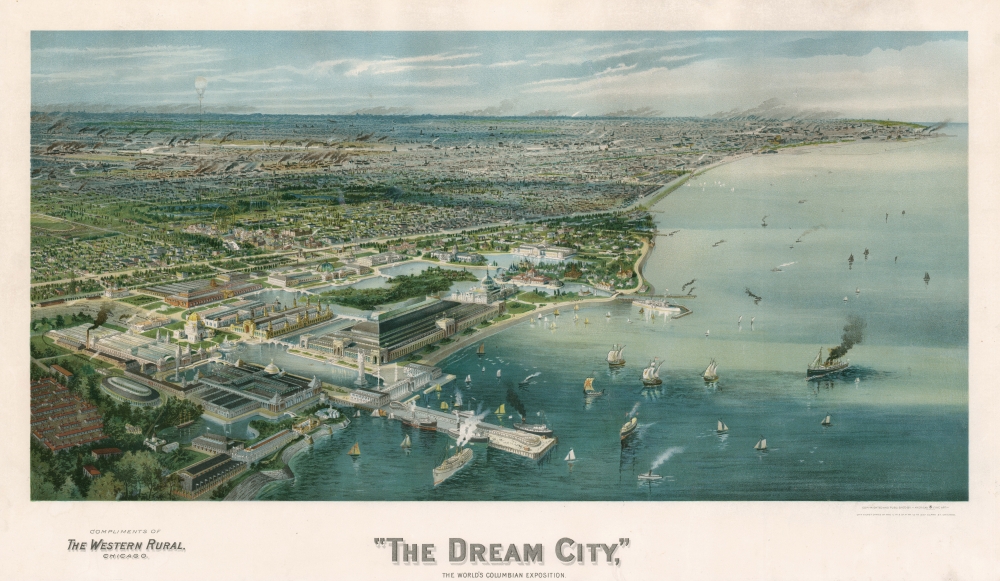 This is a beautiful and scarce chromolithograph bird’s-eye view of Chicago, Illinois, published as a promotion and souvenir for the World’s Columbian Exposition of 1893. It depicts Chicago's shore of Lake Michigan, foregrounding the buildings of the Columbian Exposition. The city sprawls in the background, with smoke pouring from dozens of chimneys: in the 19th century, a sign of progress and prosperity. The lake is filled with sailboats and steamships, some picking up and discharging passengers at the Exhibition's pier.

The view is a celebration of the architectural designs of architect Daniel Burnham. His neoclassical structures, with their white faux-stone facades, were known as the White City for their color, and also called the 'Dream City,' to reflect on the utopian optimism it was meant to evoke. A first-hand account of the opening day captures the exhibition's spirit:

Near the center of the view, at one of the northern piers of the fair, is a warship. The United States Navy intended, among the wonders displayed at the Exposition, to showcase its steel-hulled, electric-lit battleships. This posed two problems: First, treaties with Canada forbade warships of either nation to operate on the Great Lakes. Second - before the 1900 opening of the Sanitary and Ship Canal - the draft of a steel-hulled warship would be unable to enter or leave the lake. The solution - itself, arguably a quintessentially American scheme - was to fabricate a full-scale ersatz battleship - dubbed the Illinois - to show off the Navy’s new technologies. This 'ship' was designed by architect Frank W. Grogan, and built of pilings and timbers from the lake floor on up: above the waterline it sported brick sides plastered with cement to simulate the steel hull of the Indiana-class battleships she was meant to represent. Actual coal - fired generators powered the Illinois' electrically-driven turrets, her interior lighting, and her powerful searchlights. She had a skeleton Navy crew made up of officers and sailors.

While we are aware of a handful of examples that have appeared on the market in the past ten years, it is nevertheless scarce. We see only one example in OCLC, cataloged at the Yale University Library.

American Fine Art Co. (fl. 1890s) were a Milwaukee - based commercial lithographic press whose output spanned from advertisements of patent cures to beautiful panoramic city views. They commissioned work from a wide variety of artists, seldom crediting any of them on their printed output (to the confusion of the modern collector and dealer.) Learn More...