1701 De Fer Map of the Duchy of Milan, Northern Italy 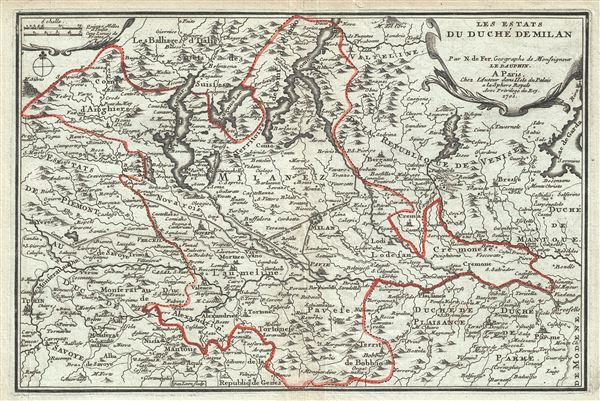 1701 De Fer Map of the Duchy of Milan, Northern Italy

This is a scarce 1701 map of the Duchy of Milan in Northern Italy by Nicholas De Fer. Centered on the city of Milan, it covers the northern part of Italy from Lake Como south to Bobbio and from Turin east as far as Lake Garda. Includes parts of the regions of Parma, Savoy, Piedmont, Switzerland, Venice and Mantua. The map renders the entire region in extraordinary detail offering both topographical and political information with mountains beautifully rendered in profile. The Naviglio Canal, one of the most important canals in Italy, is identified. Originally constructed as a possible defensive ditch in the mid- 12th century, the Naviglio Canal would eventually become the first artificial canal in all of Europe.

The Duchy of Milan, created in 1395, was a constituent state of the Holy Roman Empire. At the time this map was created, the Duchy was under Spanish control. Following the War of Spanish Succession, Spain would lose many of its territories in Italy, including the Duchy of Milan to Habsburg Austria, until in 1796, Napoleonic forces would conquer it. The Duchy of Milan would eventually cease to exist in 1797, with the signing of the Treaty of Campo Formio.

Overall, a very interesting and attractive map of the region surrounding Milan to appear in the beginning of the 18th century. This map was engraved by Harmanus van Loon and created by Nicholas De Fer for his 1701 Atlas.