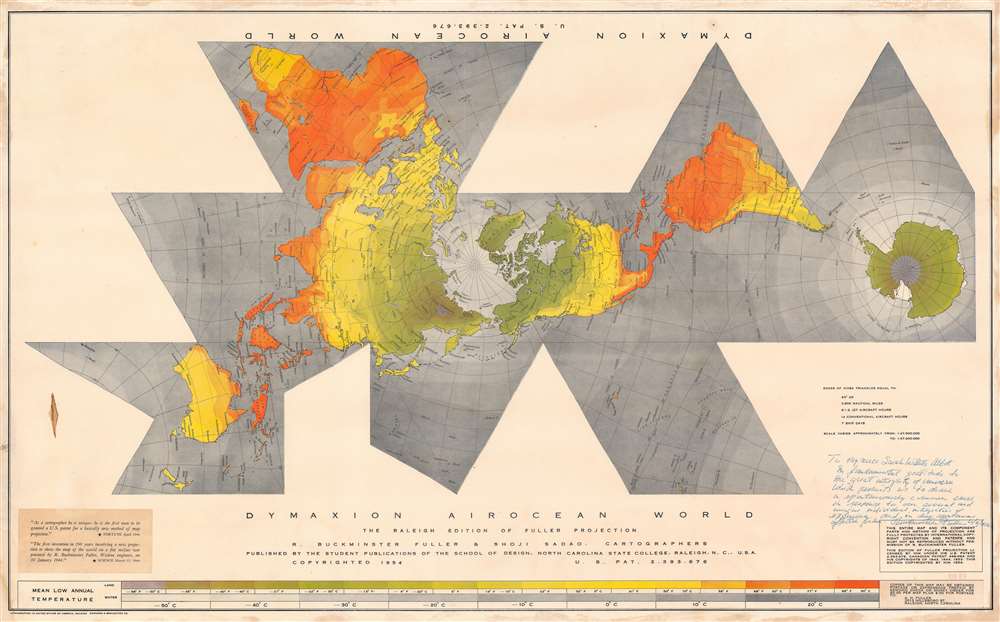 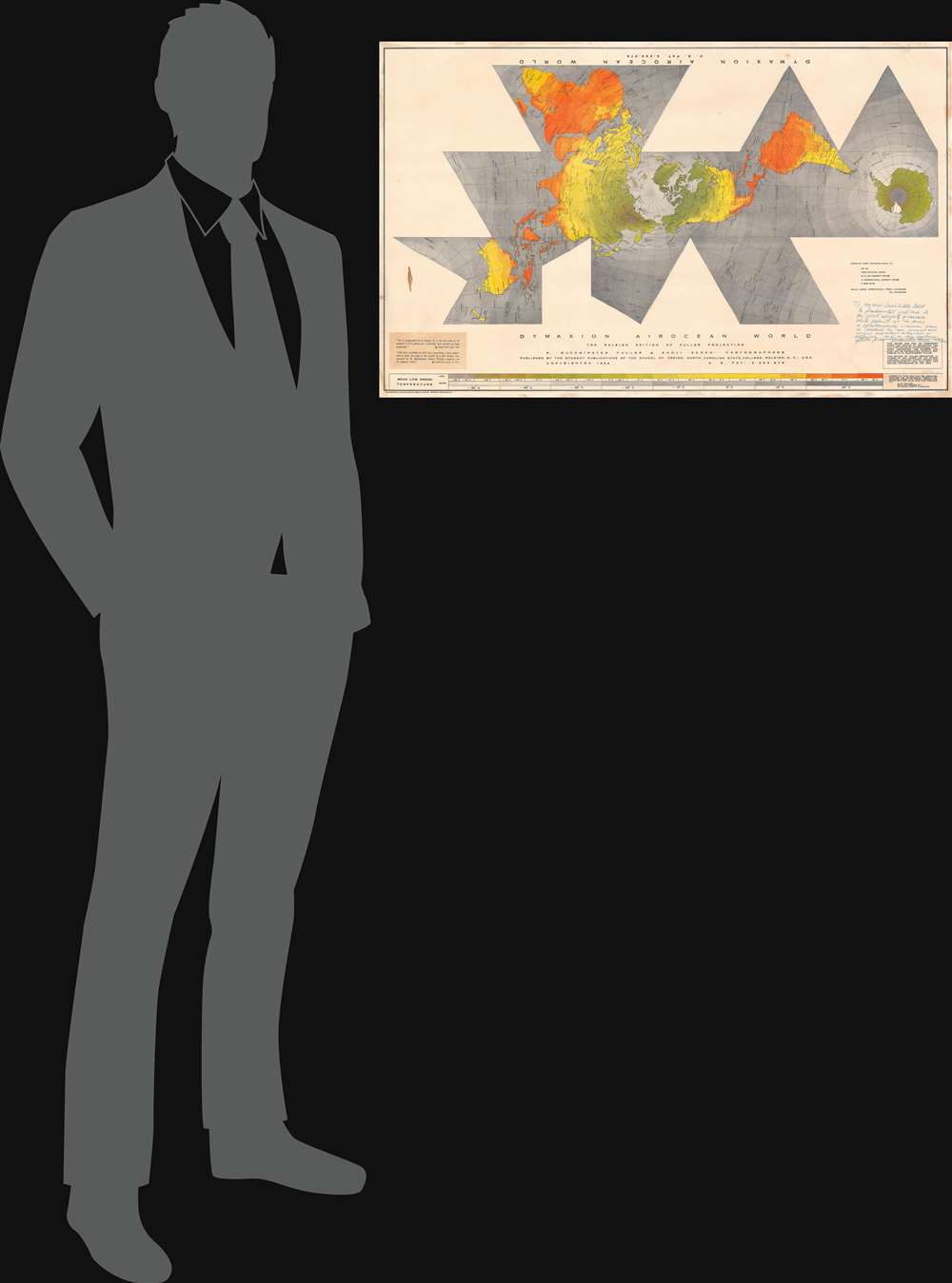 This is a 1954 first edition Buckminster Fuller and Shoji Sadao dymaxion map of the world bearing a dedication from the author to his niece. Fuller's unusual projection was intended to supplement the Mercator Projection, as it maintained an integrity of scale and could easily be rearranged to highlight certain academic points.

To my niece Sarah Willets Abbot. In fundamental gratitude to the great integrity of universe which permits us to nurse a spontaneously common sense in response to our several and unique individual integrities of experience and in deep spontaneous affection for her Buckminster Fuller 6/3/1956

What is the Dymaxion Map?

A Dymaxion map is a map projection invented by Buckminster Fuller that was a map of the world projected onto an icosahedron (a three-dimensional shape with twenty faces). When 'unfolded and flattened' the map had numerous interruptions but preserved size and shape (meaning the continents were less distorted), especially when compared with a Mercator projection. Fuller believed that this lack of distortion was a major advantage. He also created the map so that it did not have a 'right way up', since he believed the universe did not have a correct 'up' or 'down'. Also, Fuller intended for the map to be unfolded in several different ways, allowing for different aspects to be emphasized. The projection also helped Fuller explain his theories on the journeys of early seafaring peoples around the 'one island earth' in his book Critical Path. The Dymaxion projection is meant to be used only with representations of the entire world. However, Dymaxion maps make using 'conventional' navigational and cartographic methods difficult. Applying the four cardinal directions or geographic coordinates to a Dymaxion map, for example, can be quite difficult. Continents and oceans can also be drastically divided depending on how the map is 'unfolded'.

A History of the Dymaxion Map

The Dymaxion map debuted in the March 1, 1943 issue of Life magazine. In this photographic essay entitled 'Life Presents R. Buckminster Fuller's Dymaxion World', Fuller provided several examples of how the projection was meant to be used along with a pull-out section that could be assembled into a 'three-dimensional approximation of a globe or laid out as a flat map, with which the world may be fitted together and rearranged to illuminate special aspect of its geography'. Fuller applied for a United States patent for the projection in February 1944 and the patent was issued in January 1946. Fuller and Shoji Sadao co-created the Airocean World Map in 1954 and slightly modified the icosahedron as the base of the projection, depicting the world as 'one continent'.

The term Dymaxion was coined by Buckminster Fuller and is associated with aspects of his work other than the Dymaxion map: the Dymaxion car and the Dymaxion house for example. The word is a blend of the words dynamic, maximum, and tension.

This map was created by Buckminster Fuller and Shoji Sadao and published by the Student Publications of the School of Design at North Carolina State College and Edwards and Broughton in 1954. This example represents the first edition printed in an edition of 3,000. We note two examples cataloged in OCLC: New York Public Library and Princeton University. Another example is part of the collection at the University of Wisconsin - Madison.


Shoji Sadao (January 1927 - November 3, 2019) was a Japanese American architect most often remembered for his collaborations and work with R. Buckminster Fuller and Isamu Noguchi. Born in Los Angeles, California, Sadao and his family were forcibly relocated to the Gila River War Relocation Center in Arizona during World War II. He was drafted into the U.S. Army in 1945, served for four years, and was stationed in Germany as a cartographer. While an architecture student at Cornell University, Buckminster Fuller (July 12, 1895 - July 1, 1983) was one of his instructors. Thanks to his expertise in cartography, Sadao spent almost all of 1954 drawing the Dymaxion Airocean World Map by hand. This was his first collaboration with Buckminster Fuller. The first edition of the map, 'the Raleigh edition' printed by Edwards and Broughton, was published in the summer of 1954 in an edition of 3,000 copies. Sadao co-founded Fuller and Sadao Inc, an architecture firm, with Fuller in 1964. The firm's first project was the design of a large geodesic dome that would serve as the U.S. Pavilion in Montreal for Expo 67. Today the dome still stands and is known as the Montreal Biosphère. Sadao continued to work with Fuller through the 1960s and began collaborating with Isamu Noguchi as well, beginning with the production of Noguchi's folded aluminum sculpture at the Stable Gallery. Sadao also was part of the Noguchi Fountain and Plaza, Inc. which designed the Horace E. Dodge and Son Memorial Fountain and the Philip A Hart Plaza in Detroit. Noguchi, Sadao, and Fuller collaborated on the design and construction of the Isamu Noguchi Garden Museum in Long Island City, New York. From 1989 until 2003, Sadao served as the Executive Director of the Noguchi Museum. Sadao died in Tokyo. Learn More...