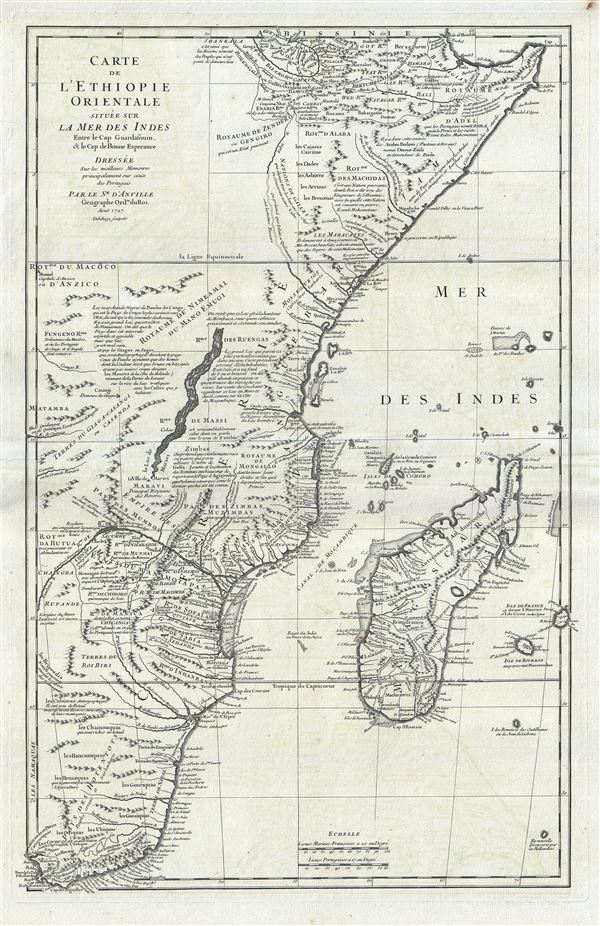 A scarce 1727 map of eastern and southern Africa by J. B. B. D'Anville. The map covers the Africa coastline from Bab al-Mandab and the Horn of Africa couth to the Cape of Good Hope, South Africa, and extends inland roughly to the, at this time in history, largely unexplored center of continental Africa. The map also includes Madagascar, the Comoro Islands, Isle de Bourbon, and Isle de France (I. Maurice). D'Anville intended this work to illustrate the discoveries of Jeronimo Lobo, a 17th century Portuguese missionary who traveled extensively in East Africa attempting to convert Ethiopian Coptic Christians to Catholicism.

Although Lobo's travels were in fact confined to the northeastern quadrants of this map, the whole offers remarkably rich detail for the period. The cartographer is here attempting to reconcile Lobo's discoveries in Ethiopia with Portuguese explorations in Monomotapa, Portuguese mapping of the Congo, and Dutch activity in South Africa. The cartographer has added a wealth of detail in the form of extensive textual annotation describing known cartography, second and third hand reports from indigenous travelers, and geographic speculation , especially in the little known parts of Africa that are now Kenya, Tanzania, Malawi, and Mozambique. Lake Malawi, here identified as Lake Maravi, is strikingly engraved with an unidentified northern terminus. Further south the Zambezi River is also richly engraved and follows, somewhat, its correct crescent course from the highlands of Zimbabwe to the coast.

Madagascar is fairly well mapped, a particularly along the western coast. Ille St. Marie, on the northeastern coast of Madagascar, is identified. At the time this island may have been the site of the semi-mythical pirate republic of Libertalia. What we know for a fact is that it was the home of such legendary pirates as William Kidd, Robert Culliford, Olivier Levasseur, Henry Every, Abraham Samuel and Thomas Tew.