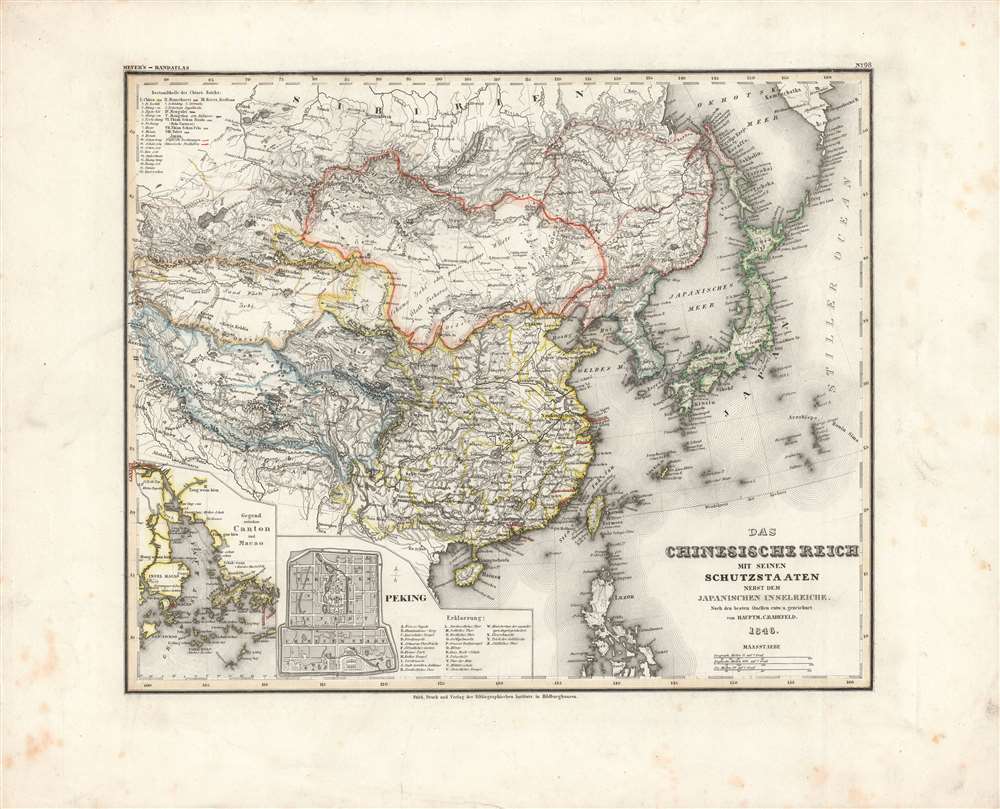 Here is Carl Radefeld's attractive 1846 map of East Asia, produced for Meyer's Grosser Hand-Atlas. It depicts the region in the wake of the Opium War (1839-1842), when the momentous changes initiated by that conflict had just begun and were not yet fully understood.

Significantly, Radefeld clearly distinguishes the various portions of the Qing empire, from 'China proper' (outlined in yellow), to Manchuria, Mongolia, Kokonor (or Qinghai in Chinese), Tibet, and the Tianshan nanlu ('Southern March') and Tianshan beilu ('Northern March'), that is, roughly, the southern and northern portions of what later became Xinjiang, which the Qing had conquered in the 1750s. Although the vast majority of the population under Qing rule lived in China proper and the emperors' rule in other parts of the empire was fairly loose, in terms of territory the areas outside of China proper constituted a majority of the realm.

At top is Siberia and the outposts of the Russian empire there (Omsk, Irkutsk, etc.). The border between the Qing and Russian empires follows the Treaty of Nerchinsk (1689), prior to several treaties in the 1850s-1860s, when a weakened Qing Dynasty was forced to surrender swathes of territory in Manchuria to Russia.

Recently-created treaty ports are underlined in red, with the exception of Shanghai, which had not yet attained anything like its later size and prominence. Just north of Shanghai, Zhoushan (Tschusan) is underlined, as it had been captured by the British during the Opium War and held by them until 1846 as a ransom to ensure that the Qing implemented the Treaty of Nanjing, which ended the conflict. Prior to the Opium War, Zhoushan had been one of the main sites of China's foreign trade and maritime interactions, but in the decades following the Treaty of Nanjing it was quickly eclipsed by Shanghai.

At bottom-left are two insets, one of the Pearl River Delta, including Hong Kong, Macao, and Canton (Guangzhou), and the other of Beijing. The 'English Factory' at Canton, along with the recently-acquired colony of Hong Kong and the Portuguese colony at Macao are marked out in red. Beijing is divided into three sections, the imperial palace or 'Forbidden City' at center, surrounded by the 'Tartar' or Inner City of high-level Qing officials and servants of the imperial household, and the Chinese or Outer City of lower officials and other residents of the city.

Tokugawa Japan and Joseon Korea are also depicted, though Western knowledge about both countries was quite limited at the time. Japan would soon follow China in being on the receiving end of gunboat diplomacy, in their case at the hands of the Americans, while Korea managed to fend off multiple foreign military expeditions until definitively being 'forced open' by Japan in the 1870s.

This map was published at a time when the regional and global balance of power was shifting dramatically. The Qing Dynasty, which had built a massive empire with a well-functioning bureaucracy in the 17th and 18th centuries, was now facing multiple severe challenges due to both internal and external pressures. After decades of tension over the illegal opium trade in and around Canton, which had been driven by the British, the Qing retaliated by sending the incorruptible official Lin Zexu to crack down on smuggling. Lin proceeded to seize and then burn the stores of the British opium traders in Canton, wiping out their annual profits. In response, the traders (i.e., drug smugglers) used their influence in Parliament to gain backing for a punitive military expedition against China, setting off the first Opium War in 1839.

The British victory in that conflict was a shock to the Qing system and the existing order in East Asia. Combined with pre-existing problems such as overpopulation and a deeply understaffed bureaucracy, the economic, social, and political forces unleashed following the Opium War set off drastic upheavals in China. The 1850-1860s saw the Qing fending off multiple internal uprisings simultaneously, the largest being the Taiping Rebellion, which managed to capture much of southern China before stalling out and gradually being pushed back.

This map was engraved, printed, and published by Carl Radefeld of the Bibliographisches Institut in Hildburghausen, a company founded by Joseph Meyer. It appeared as map No. 98 in Meyer's Grosser Hand-Atlas, a landmark work of mid-19th century German cartography. Although the map itself is dated as 1846, the Grosser Hand-Atlas was not published and distributed until 1860. Despite an identical title and similar format, it differs from the 1839 map in Steiler's Hand-Atlas as well as an 1856 map attributed to Joseph Grässl and Wilhelm Issleib, also published by Meyer in Hildburghausen. This map is not known to be cataloged among the holdings of any institution, while Meyer's Grosser Hand-Atlas is held by perhaps a dozen institutions in North America and Europe.


Carl Christian Franz Radefeld (1788 - 1874) was a German cartographer. Radefeld studied law and theology in Jena and began working as a lawyer in 1811. In the early 1840s, Radefeld began working in cartography in Augsburg, where he worked with Joseph Meyer and Meyer's publishing house Bibliographisches Institut. Learn More...