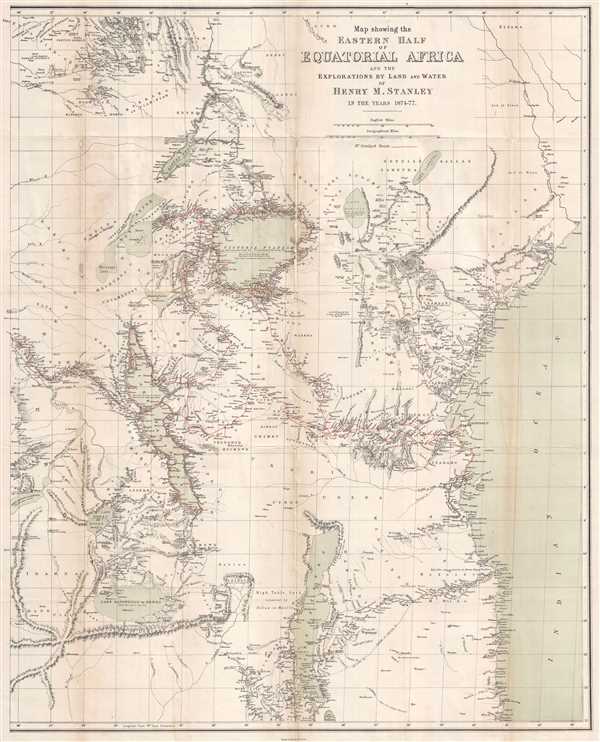 Traces the first half of Stanley's first expedition across Africa from 1874 - 1877.

This is a rare 1879 Henry Morton Stanley map of East Africa. The map depicts the region from South Sudan to Zambia and Mozambique and from the Democratic Republic of the Congo to the Indian Ocean. A study in stark contrast, Stanley's route from Zanzibar across the continent to Uzimba in the modern-day Democratic Republic of the Congo, is highly detailed. Points all along the route are labeled, including during his circumnavigation of Lake Victoria and Lake Tanganyika. Notes concerning the region's larger lakes are also included, such as their elevation above sea level and the name of the first European to 'discover' each lake. However, outside of the immediate vicinity of Stanley's expedition, the map is blank, underlining the complete lack of knowledge then available concerning African geography and its people. Tribes are named, and river courses are included, but the majority of the territory depicted is left blank.

This map traces half of Henry Morton Stanley's first trans-Africa expedition, which took place from 1874 to 1877. Its stated goals were to explore Lake Victoria, Lake Albert, and Lake Tanganyika, and their inflowing and outflowing rivers, and to explore the Lualaba River downstream from its outflow. Another important goal of the expedition was to establish the source of the Nile River. Sponsored by the New York Herald and the Daily Telegraph, Stanley left Zanzibar on November 12, 1874 at the head of a column of 230 people, most of whom were African porters. By March 1875 he and his party arrived at Lake Victoria, though over sixty members of his party had died en route. Stanley spent fifty-seven days exploring Lake Victoria, and then moved on to Lake Tanganyika. He was unable to explore Lake Albert due to a war between Uganda and Wavuma. The party then began work on achieving their final goal of determining whether the Lualaba River fed the Nile, the Congo, or even the Niger. This arduous task took nearly a year, and in the end Stanley's party numbered only 115, including three children that had been born during the trip.

This map was produced for Henry Morton Stanley's Through the Dark Continent; Or, The Sources of the Nile: Around the Great Lakes of Equatorial Africa and Down the Livingstone River to the Atlantic Ocean and most likely published in the first American edition in 1879. This map is rare on the market.

Sir Henry Morton Stanley (January 28, 1841 - May 10, 1904) was a British journalist and explorer and a seminal figure in the history of exploration for which we can offer only a cursory treatment here. Stanley is renowned for his explorations of central Africa, locating the missionary and explorer David Livingstone, and his search for the source of the Nile. Born in Wales, Stanley was the illegitimate son of an 18 year old woman and an unknown man, saddling him with the burden of illegitimacy throughout his life. Rowlands moved to the United States in 1859, where he adopted the name Henry Morton Stanley under unclear circumstances. Stanley fought on both sides of the American Civil War and also served in the Union Navy, possibly the only man to serve in all three. After the war, Stanley became a foreign correspondent for the New York Herald, for which he traveled the world, writing stories about his explorations for the paper. Learn More...

Stanley, H.M., Through the Dark Continent; Or, The Sources of the Nile: Around the Great Lakes of Equatorial Africa and Down the Livingstone River to the Atlantic Ocean. (New York: Harper and Brothers) 1879.