1860 U. S. Coast Survey Chart or Map of the Mississippi Sound - Eastern Part 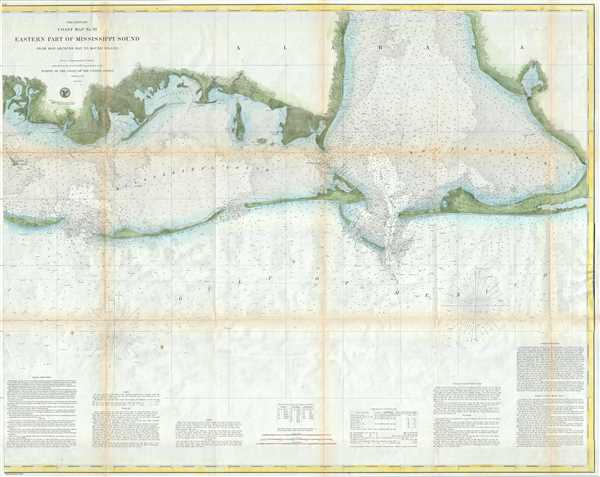 1860 U. S. Coast Survey Chart or Map of the Mississippi Sound - Eastern Part

An uncommon U. S. Coast Survey Charts of the Mississippi Sound.

This is a highly unusual and rarely seen 1860 U.S. Coast Survey chart or map of the eastern part of the Mississippi Sound. Covers the coast of Mississippi and Alabama roughly from Round Island and the mouth of the Pascagoula River eastward as far as Weeks Bay and Bon Secour Bay. Offers extraordinary detail throughout including sailing instructions, notes on tides, notes on winds, identification of various light houses and buoys, and literally thousands of depth soundings. This chart was compiled under the supervision of A. D. Bache, one of the most influential Superintendents in the history of the Coast Survey.

Report of the Superintendent of the United States Coast Survey, Washington, 1860.