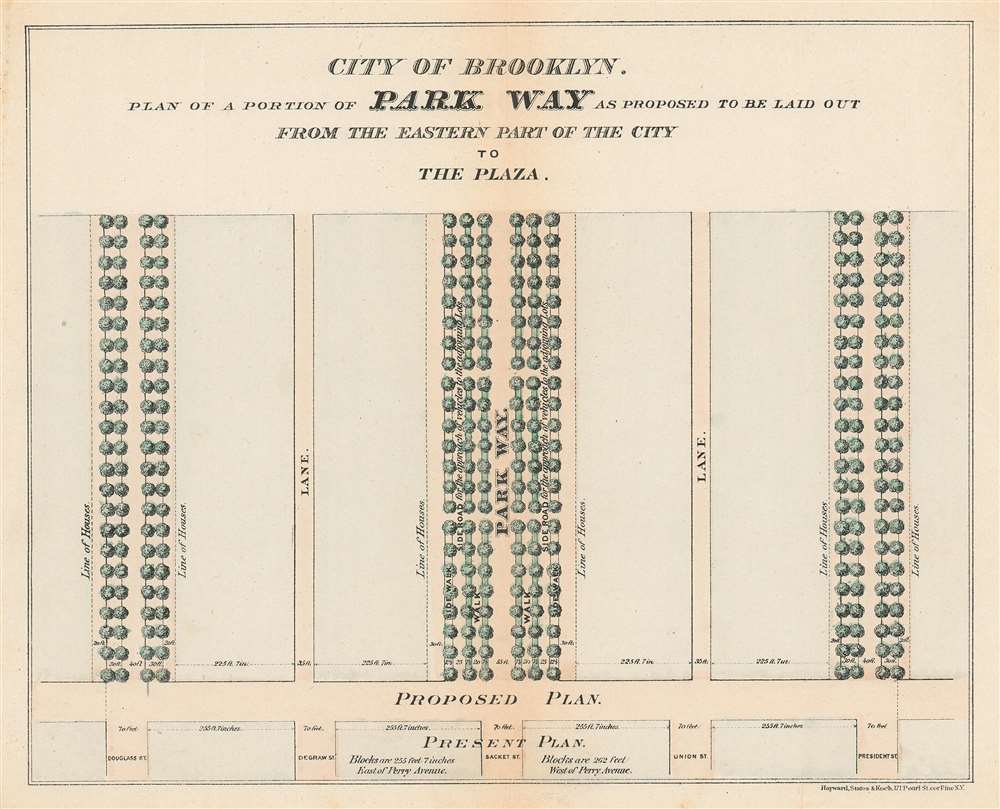 The first map of any parkway, anywhere - in this case Brookln's Eastern Parkway.
$375.00

A rare 1868 example Vaux and Olmsted's preliminary plan for Eastern Parkway, Brooklyn. This may well be the first published plan of Eastern Parkway, and indeed any parkway anywhere, which began construction about 2 years after this initial layout was published.

The First Parkway - ever

According to the New York City Department of Parks and Recreation, the world's first parkway was conceived by Frederick Law Olmsted and Calvert Vaux in 1866. The term parkway was coined by these designers as a landscaped road built expressly for 'pleasure-riding and driving' or scenic access to Prospect Park (also designed by Olmsted and Vaux). To these ends, commerce was restricted. The parkway was constructed from Grand Army Plaza to Ralph Avenue (the boundary of the City of Brooklyn) between 1870 and 1874. Olmsted and Vaux intended Eastern Parkway to be the Brooklyn nucleus of an interconnected park and parkway system for the New York area. The plan was never completed but their idea of bringing the countryside into the city influenced the construction of major parks and parkways in cities throughout the United States.

This map was first published in the 1868 edition of William Bishop's Manual of the Common Council of the City of Brooklyn. It was engraved and printed by the firm of Hayward, States, and Koch from 171 Pear Street, New York. Extremely scarce.


George Hayward (fl. c. 1850 - 1870) was an American lithographer based in New York City in the middle to late 19th century. Hayward's imprint appears on numerous 19th century maps associated with the Manual of the Corporation of New York, published at various times by David T. Valentine and Joseph Shannon. He also did similar work for William Bishop and Henry McCloskey of Brooklyn. He was involved in various partnerships, publishing at various times as Hayward, States and Koch (171 Pearl Street), Hayward and Lepine (171 Pearl St). Today he is memorialized by Heyward Street in South Williamsburg, Brooklyn.

Very good. Slight wear on original fold lines.
Looking for a high-resolution scan of this?