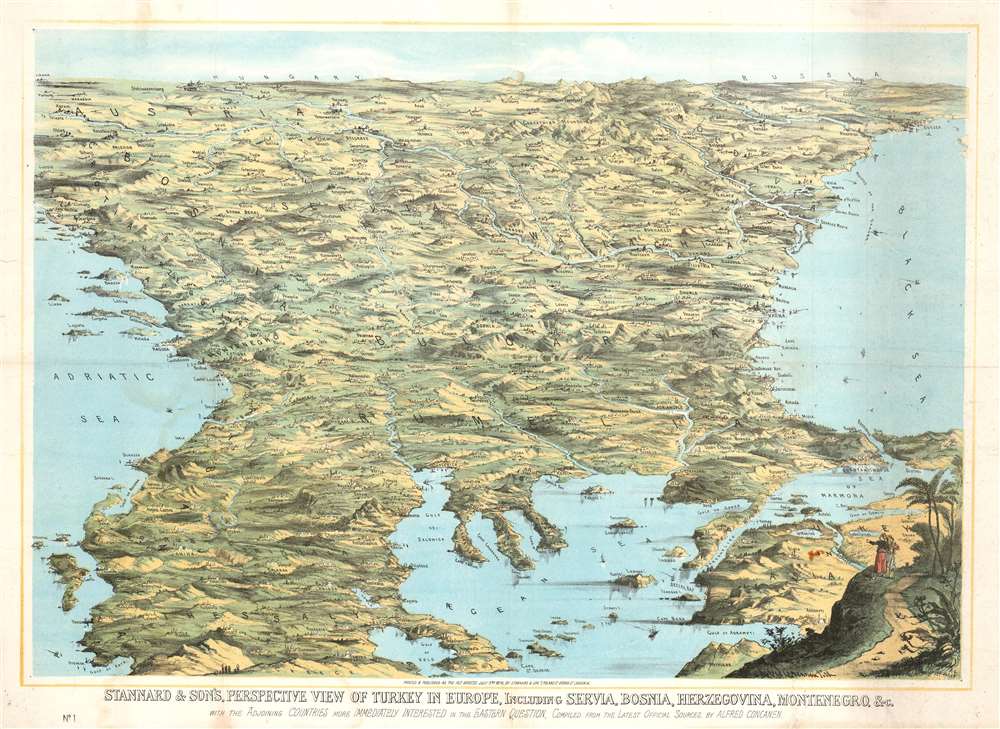 The Balkans on the cusp of their independence of the Ottoman Empire.
$3,500.00

Stannard and Son's, Perspective View of Turkey in Europe, Including Servia, Bosnia, Herzegovina, Montenegro, and c, with the Adjoining Countries more Immediately Interested in the Eastern Question, Compiled from the Latest Official Sources, by Alfred Concanen.
1876 (dated)     21 x 29 in (53.34 x 73.66 cm)

An impressive 1876 William Stannard and Alfred Concanen bird's-eye perspective view of the Balkans during the Great Eastern Crises (1875 - 1878). The view centers on Sofia, Bulgaria, with coverage extending from the Adriatic to the Black Sea and from Odessa and Belgrade to Thessaly (Greece), embracing modern day Bulgaria, the Sea of Marmora, the Dardanelles, Montenegro, Bosnia, Serbia, Herzegovina, and Albania.

This area was, as this map went to print, enmeshed in a region-wide rebellion against Ottoman hegemony. The conflict of great interest in western Europe, where there was general concern, was instability in the southeastern Europe bleeding into a continent-wide conflict. The 'Eastern Question', as it was known, was essentially, 'what was going to happen to the crumbling Ottoman Empire, and should Western Europe intervene?' Europe did intervene, and this map illustrates the opening stages of that intervention, and the precursor to the Russo-Turkish War of 1877 - 1878.

The Great Eastern Crises was a conflict in the Balkan Territories of the Ottoman empire between 1875 and 1877. The crises had its roots in excessive taxation relating to foreign debt taken by the Ottoman Empire during the Crimean War, administrative corruption within the empire, the lavish excesses of the Sultan's Imperial court, and dissatisfaction among both Muslims and Christians in the Balkan provinces. In 1875, prompted by high taxes and a series of pro-Muslim reforms, a series of rebellions, led by Herzegovina and Bulgaria, ignited across the region. Despite being in a dire state of financial ruin, the Ottomans began a largely successful campaign of brutal suppression. Rumors of atrocities against Ottoman Christians led to the League of the Three Emperors (Germany, Austria-Hungary and Russia) to intervene. Although they initially came to a settlement with the Sultan, the 1876 Berlin Memorandum, which granted additional freedom to Christians, the Balkan provinces themselves, citing past Ottoman duplicity, rejected the accord.

The failure of the Berlin Memorandum led Russia to declare war on the Ottoman Empire in 1877. Russia recognized the conflict as an opportunity to seize desirable territories along the Black Sea and potentially Istanbul itself - and, with this territory, port access to the Mediterranean and Atlantic, a long-time sticking point for Imperial Russia. Russia won victory after victory, driving hard towards Istanbul. Britain, fearing increased Russian power in Turkey might threaten British dominance in Central Asia, convinced Austria and Germany to intervene. They forced Russia to the table. Hostilities formally ended with the March 3, 1878 Treaty of San Stefano, which stipulated independence to Romania, Serbia, and Montenegro; autonomy to Bulgaria; reforms in Bosnia and Herzegovina; and ceding Dobruja and parts of Armenia to Russia alongside a large indemnity.

Lithograph 'seat of war' perspective views began to appear in Europe in the 1840s. At the time, cartography, although widely disseminated, rarely offered significant regional detail. Such information, particularly in time of war, would have been considered valuable state-controlled secrets. Nonetheless, the rise of news-consumption, general literacy, and economical printing techniques created a voracious appetite for cartographic knowledge. In addition, active war engendered passionate interest on the home front - where are our boys? Recognizing an opportunity, European commercial lithographers began to illustrate European wars using expansive bird's-eye style views, which enabled readers to understand the geographic deportment, terrain, and character of contested territories. Such views were often printed as brilliant multi-color chromolithographs, on heavy stock, meant for framing and prominent display. While the tradition of 'seat of war' views was pioneered in Europe, 48ers fleeing the failed Springtime of the People revolutions of 1848 - 1849, carried the art form to the United States, where it became a popular way of illustrating the American Civil War (1861 - 1865). Later, following the Civil War, it transformed into a nation-wide industry of viewmaking, with a focus on real-estate promotion and urban panoramas.

This map was published in London in 1876, just before the outbreak of the Russo-Turkish War of 1877 - 1878. It was drawn by the great British lithographic artist Alfred Concanen, then in the employ of the printing and lithography firm Stannard and Son. We are aware of no other surviving examples.

Alfred Concanen (May, 1835 - December 10, 1886) was a British publisher and lithographer active in London, England, in the second half of the 19th century. Concanen was of Northern Irish stock from the Galway region, but was born in Nottingham, England. His father Edward John Concanen (1804 - 1868) was a noted 'engineering artist' and portraitist. It is unclear where Concanen learnt lithography, but it is likely that he was trained by his father. As early as 16, Concanen is recorded as working as an attorney's clerk. Concanen worked for several years with the Illustrated Sporting and Dramatic News. In the 1850s he partnered with Thomas Wales Lee (1833 - 1910) and Henry Herepath Siebe (1832 - 1887) publishing under the imprints of 'Concanen, Lee and Siebe' and 'Concanen, Siebe and Co.' Lee left the firm in February of 1865 and Concanen himself in December of 1866. He also began publishing on his own, issuing sheet music covers, in 1860. While Concanen is most famous for his sheet music and theater broadsides, he did dabble in chromolithograph 'seat of war' views in partnership with Stannard and Son from about 1870. Described as 'slight of build with a fair full moustache, something of a dandy, good natured, generous, a play copy of the lions comiques whom he immortalized in his lithographs.' He studio was located at 12, Frith Street, Soho, London. Concanen died suddenly in 1886 after a post-theater visit to a pub on the strand. Learn More...


William Thomas Stannard (December 15, 1815 - November 23, 1895) was a lithographic printer active in London during the second half of the 19th century. Stannard was born in London, the son of a postal worker. Stannard published initially in partnership with 'Rae' as 'Stannard and Rae' and alone as 'Stannard and Co.' In 1847, he entered into partnership with Francis Dixon as 'Stannard and Dixon', an imprint that remained active until June of 1868, when the partnership dissolved. At this time, Stannard's son, William Stannard (1848 - 1895), joined the firm, which was reestablished as 'Stannard and Son.' This father-son partnership remained active until November of 1891. From 1870, he employed the artist and lithographer Alfred Cancanen to issue numerous striking panoramic 'seat of war' views. In his personal life Stannard was a known philanderer who kept two households, one with his wife Catherine Jane Bowskill (1821 - 1887) and another with his mistress Selah Sands (1831 - 1905). Shortly after Stannard's death, the firm was liquidated at auction. Learn More...

Good. Some creasing. Edge wear.
Looking for a high-resolution scan of this?