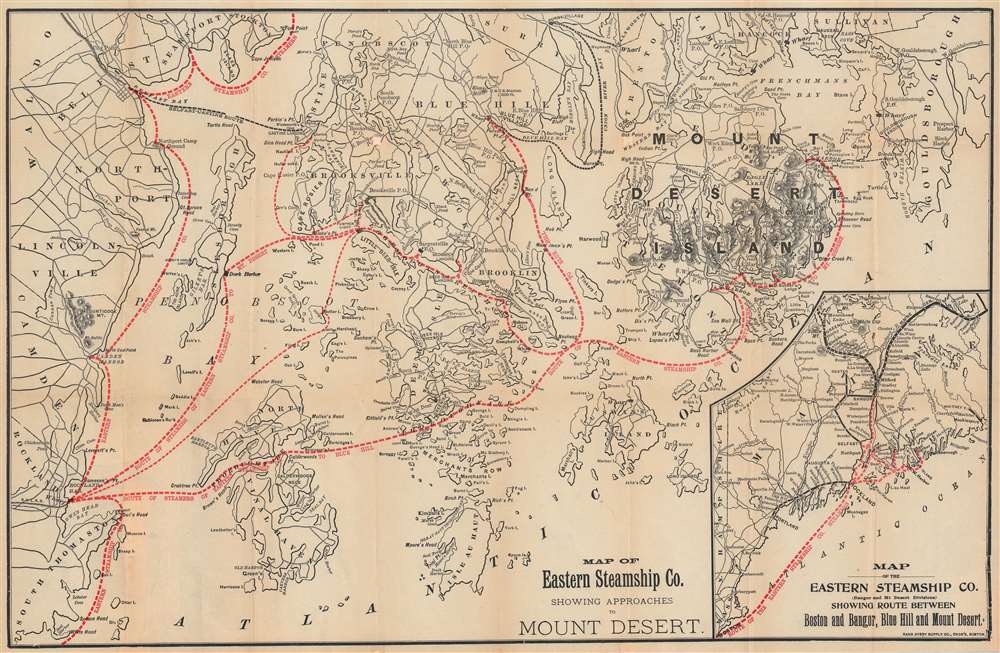 Travel to Mount Desert Island via the Eastern Steamship Company.
$250.00

The Eastern Steamship Company - and an American Scoundrel

To return to Morse, he finally reported to the Atlanta penitentiary in January 1910 and was imprisoned alongside Charles Ponzi (who would later create the infamous Ponzi scheme). Morse fell ill in 1912 and was diagnosed with Bright's Disease, along with other maladies, and it was determined that he would die if he remained in prison. This earned him a pardon from President William Howard Taft. Once out of prison, Morse left for Wiesbaden, Germany, to seek treatment. Not long after he left the Justice Department learned that Morse had faked his illness by drinking a combination of soapsuds and chemicals. His association with Eastern (but not shipping) ends here.

Mount Desert Island, so named because of its many bald rocky mountaintops, has been a tourist destination since the mid-19th century, when it was discovered by outsiders, artists, journalists, Hudson River School artists, and other patrons, known collectively as the 'Rusticators.' Undaunted by crude accommodations and simple food, they sought out local fishermen and farmers for accommodation and guidance. Summer after summer, the rusticators returned to renew friendships with local islanders and, most of all, to savor the fresh salt air, scenery, and relaxed pace. Soon the villagers' cottages and fishermen's huts filled to overflowing, and by 1887, more than 30 hotels competed for vacationers' dollars. Tourism was becoming the island's primary industry. Drawing the attention of the wealthy and influential, the island was designated as Sieur de Monts National Monument by President Woodrow Wilson in July 1916. In February 1919, the area's status was officially changed from a National Monument to a National Park, making it the first National Park east of the Mississippi River. With the change to a National Park came a name change, to Lafayette National Park. It was not until January 1929 that the park was given its current name, Acadia National Park. Acadia is unlike most other National Parks as its creation was encouraged by numerous private individuals. One, John. D. Rockefeller, purchased a summer home in Bass Harbor in 1910. Rockefeller began buying up land on the island with the goal of creating a system of carriage roads to make 'one of the greatest views in the world' accessible to all visitors.

This map was created by Rand Avery and published by the Eastern Steamship Company c. 1905. Admittedly, since this map is undated, it could date from any time during the existence of the Eastern Steamship Company, which was from 1901 until 1911. We note two cataloged: Harvard University and Yale University, however there is a discrepancy between the dates of publication.