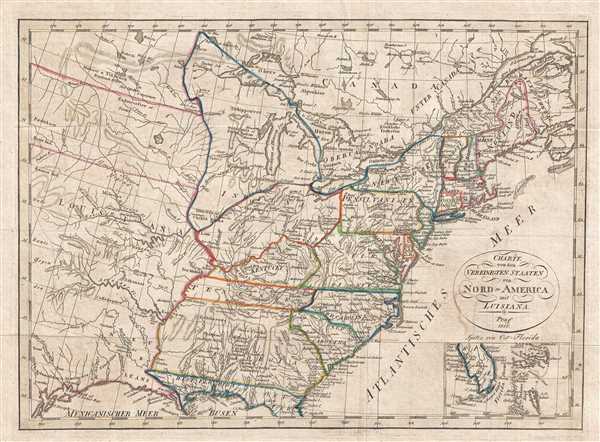 Includes curious borders in the Louisiana Territory and elsewhere in the United States.
$1,000.00

This is an 1818 Franz Pluth map of the eastern United States. The map depicts the region from the headwaters of the Missouri River to the Atlantic Ocean and from Quebec and Ontario to the Gulf of Mexico. Several curiosities present themselves upon examination of this map, with some arising from the colored borders while others fall on the unusual labeling of certain regions within the United States.

Upon examination of the colored borders, it becomes apparent that these boundaries were not necessarily the ones originally put forward by the cartographer. Some of the unusual borders, such as the elongated northern border of Maine, which extends further into New Brunswick than it does in reality, and the borders between Tennessee, North Carolina, and South Carolina, were created by the cartographer. These borders, and other state borders, are illustrated through dashed lines, allowing the viewer to clearly see said borders. However, certain borders, such as those between Massachusetts, Vermont, and New Hampshire, as simply dotted lines, while others, such as that between Maryland and Virginia, or that between Kentucky and Indiana, are waterways or rivers. This allows for an understanding that several different notations are used to mark state borders. Thus, the border in the Northwest Territory, along the Theahiki River, which splits the vast territory labeled as Indiana in two, could have been presumed by the colorist that it was in fact a border.

Increasingly strange is the presence of two dashed lines which cross the Louisiana Territory west of the Mississippi River (the boundary between Louisiana and the rest of the country). These lines use the same notation as numerous other state boundaries used between several states in the east, allowing for the inference that these were meant to be boundaries / borders. We have been unable to concretely identify the reason for their existence and can only speculate as to why these lines appear here. Also, further south in the Louisiana Territory, a dotted line, much like those between Kentucky, Tennessee, and Georgia, is depicted in a winding, cross-country path to the Sabina and Mexicano Rivers. Why this line is not colored, while others are, is also a mystery. One final curiosity is included in the Louisiana Territory. What is today the state of Louisiana is labeled as New Orleans, but it does not have any defined boundaries. Why there is a city and a region named New Orleans is also unknown to us.

Aside from the quandaries presented by the borders, a high level of detail is present. Numerous coastal locations are labeled throughout, including Mount Desert Island, Block Island, Long Island, Albermarle Sound, and Cape Hatteras. Several important cities, both in the northeast and elsewhere, are also noted, such as Boston, Philadelphia, Washington, D.C., Savannah, New Orleans, Pensacola, Nashville, and St. Louis, along with smaller towns. All five Great Lakes are illustrated and labeled, although Lake Superior is labeled as 'Ober See', which translates to 'Upper Sea'. Various Native American tribes are labeled throughout, including Seminoles, Miamis, and Sioux. The Mississippi, Missouri, Arkansas, Ohio, and St. Lawrence Rivers are labeled.