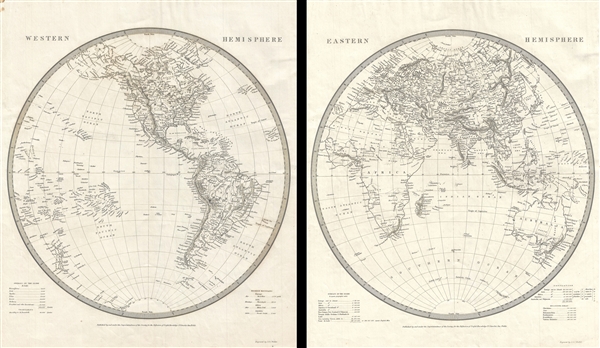 Beautiful two map set depicting the world according to hemispheres.

This is a beautiful set of two 1841 first edition maps of the World on hemispherical projections by the Society for the Diffusion of Useful Knowledge or S.D.U.K. They depict the Western and Eastern Hemispheres offering a fascinating snapshot of the world during a period of rapid globalization and discovery. Both maps note towns, rivers, mountains, deserts, islands, and various other important topographical details. Elevation throughout is rendered by hachure.

The map of the Western Hemisphere covers North America, South America, West Indies and most of Polynesia, including New Zealand. The Antarctic continent, first sighted in 1820, but neglected during the first half of the 19th century, does not appear on the map.

The map of the Eastern Hemisphere includes the entirety of Asia, Europe and Africa as well as Australia and much of the Pacific. The interior of Australia is largely blank though the coastal colonies are noted. These include Mediterranean North Africa, Egypt, Abyssinia, the western Niger valley, the Congo, South Africa, and the lands of Mozambique and Zimbabwe.

This map is part of A Series of Maps, Modern and Ancient, issued by subscription. Each folder in the series would contain a set of two maps bound together. These two maps were issued in folder no. XCII. Original folder includes the names of committee members of the ‘Society’, maps already published, the contents and the printer and publication details. These maps were engraved by J. and C. Walker. This folder was printed by William Clowes and Sons for the Society for the Diffusion of Useful Knowledge in their September 30, 1841 subscriber’s edition folder. The folder at the time was priced at 1 shilling plain or 1 shilling 6 pence for colored maps.

A Series of Maps, Modern and Ancient, September 30, 1841.     The Society for the Diffusion of Useful Knowledge (S.D.U.K.) Atlas was initially issued in parts over several years by Baldwin and Craddock to promote the society's mission of egalitarian self-education. The first S.D.U.K. began appearing in 1829 when the society contracted John Walker to produce the first proofs. The first S.D.U.K maps were produced serially by Baldwin and Craddock and issued in 2 map batches, priced at 2 shillings each. The series, originally anticipated to feature 50 maps, ultimately contained 200 and took over 14 years to produce. The initial production was completed in 1844 when the whole was issued in its first compiled atlas edition. Around 1842, following the 1837 bankruptcy of Baldwin and Craddock, publication of the atlas was taken over by the Society itself, who issued editions in 1838, 1839, 1840, 1841, and 1842. Overburdened by the work of publishing, they then outsourced the publication to Chapman and Hall in 1842. Chapman and Hall produced editions in 1842, 1843, and 1844. Dissatisfied with the quality of Chapman and Hall printing, the Society turned to another publisher, Charles Knight, who issued editions under the auspices of the Society in 1844, 1845, and 1846. In 1846 Knight officially acquired the plates in his own right and reissued in revised editions until 1852, when he sold them to George Cox. Cox in turn sold them to Edward Stanford who published them from 1856 well into the 1860s. The S.D.U.K. Atlas is known for the quantity and quality of its maps. The S.D.U.K. published many maps of areas largely ignored by other publishers. The many city plans incorporated into the atlas are particularly admired and are the highlight of the S.D.U.K.'s long map publishing history. As a whole the S.D.U.K. Atlas was groundbreaking in terms of quality, scope, and being offer at a cost effective price point.