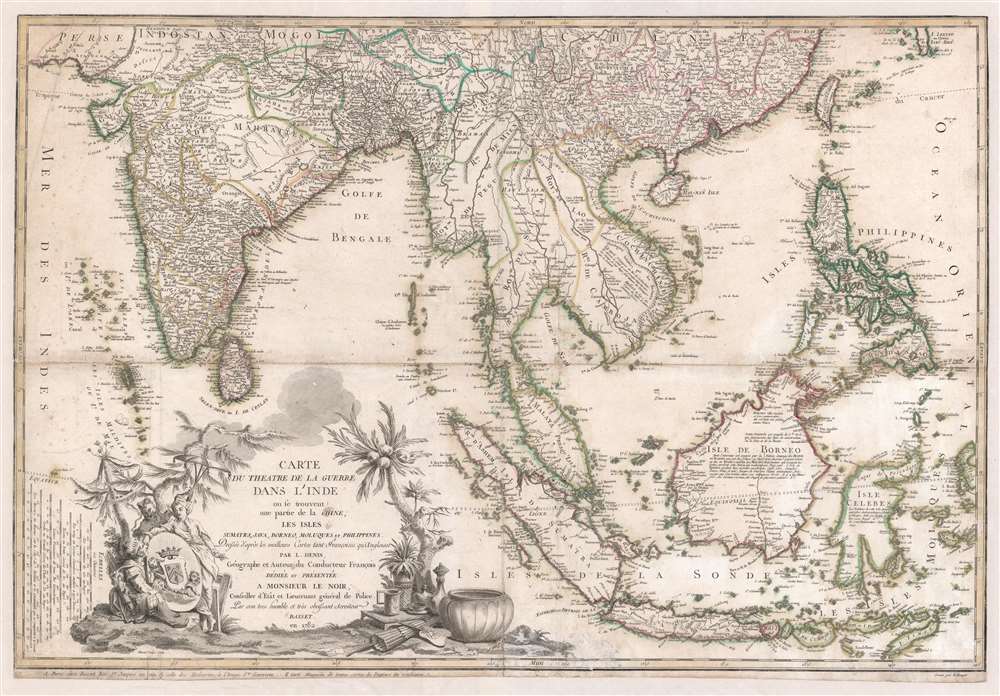 A rare and important 1781 separately issued map of the East Indies by Andre Basset. This map was issued to illustrate a series of conflicts in India and East Indies associated with the American Revolutionary War (1775 - 1783), including the Anglo-French War (1778 - 1783), Fourth Anglo-Dutch War (1780 - 1784), and the Second Anglo-Mysore War (1780 - 1784). The theater of war described is a vast expanse of East Asian territory centered on the Malay Peninsula, but extending from the Maldives to the Philippines and from China to Java, including all of the East Indies, the Indian Subcontinent, the Philippines, and Southeast Asia.

The American Revolution - in SE Asia

The 1776 signing of the American Declaration of Independence and the outbreak of the American Revolutionary War set the roughly equipped and loosely organized American colonies against Great Britain, the greatest mercantile, military, and naval empire of the age. The American Colonial or Continental armies quickly realized that they needed allies and so turned to the traditional enemies of the English, in this case France and the Dutch Republic. The Continental government secured a military alliance with the French and a strategic trade agreement with the Dutch Republic. These treaties expanded the scope of the war from North America into a global conflict. The British, French, and Dutch used the war as an excuse to escalate pre-existing colonial rivalries in Asia. This map attempts to illustrate the key players and regions in that theater.

Much of the conflict took place in and around the subcontinent and is associated with the Anglo-French War. The French signed the Treaty of Alliance with the United States in 1778. When word of the alliance reached British East Indian Company officers in India, they moved quickly to take French colonial outposts in Pondicherry and Mahé. The French, in turn, supported the Nawab of Mysore, Hyder Ali, in his war against the British East India Company. Deprived of their bases on the subcontinent, the French instead focused on the seas, sending a fleet under Vice Admiral Pierre André de Suffren Saint-Tropez. Suffren was equally matched with the British commander, Vice Admiral Edward Hughes, with whom he fought five hard contested battles with no clear victor.

While the Dutch signed no formal treaty with the United States, they did recognize the Continental Congress in April of 1782 and, in October of the same year, concluded a treaty of amity and commerce. The British took this as an opportunity to assault Dutch colonial and economic interests in the East Indies. The Dutch East India Company (VOC) and the British engaged in several conflicts in Sumatra, where both had outposts. The British sent a weak force against the VOC stronghold of Padang who, unaware of just how weak the British force was, surrendered the entire west coast of Sumatra without a fight. The VOC, already in decline, never fully recovered.

Most significantly, these conflicts forced the British into a multi-front global war. Unable to send the bulk of their forces to the Americas, they instead relied on allies and loyalists to support their cause. Had the British been able to direct their full military towards the Americas, it is unlikely that the Continental forces would have won the American Revolutionary War.

This map is part of a series of separately issued maps by Denis and Basset prepared in 1781-82 to promote the expanding conflicts associated with the American Revolutionary War. He also issued similar 'Theatre de la Guerre' maps of colonies in America, the West Indies, and Europe. All are today extremely rare due to their short runs and ephemeral nature as separate issues. This map was drawn by Louis Denis. A relative, Martial Denis, drew and prepared the dramatic title cartouche which adorns the lower left. The map was engraved by Bellanger, who some have suggested may be Mademoiselle Bellanger, whose name is regularly associated with Denis. The Bellanger in question may also by Jean Antoine Bellanger, a French engraver active in Paris during the middle part of the 18th century. It was published in 1781 by Paul-André Bassett. The present example is the first edition. A second, revised edition was issued in in 1782 by Chaumier.

Louis Denis (1725-1794) was a Paris based engraver, cartographer, and publisher. Little is known of Denis, but he held the titles of Géographe des Enfants de France and Géographe du duc de Berry (future Louis XVI). These positions essentially involved tutoring the young prince in geography. He is best known for his incomplete road atlas of France, Le Conducteur Français.. He was a relative of an often worked with Martial Denis, also an engraver. Denis also worked with fellow engraver Louis-Charles Desnos. Learn More...