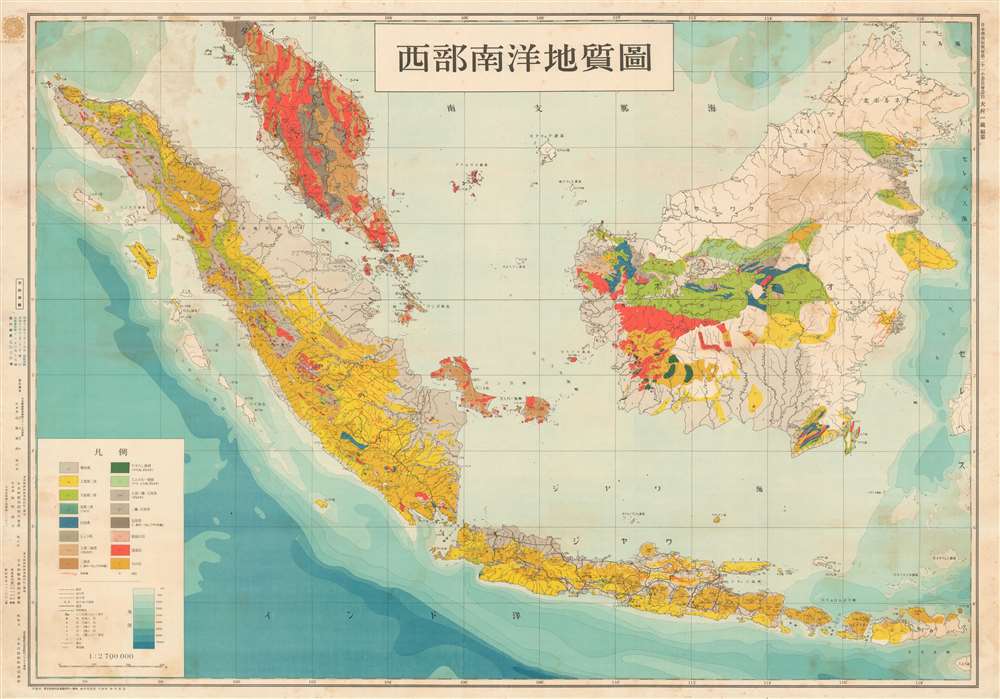 An exceptional discovery, this is Ōmura Ichizō's World War II era geological survey of Malay and the East Indies. The survey was completed and published one year after the Japanese conquest of the region in order to assess drilling and mining viability. With a multi-front war in progress, the Japanese needed to acquire as many raw material resources as possible and the geological exploitation of this region was essential to their ambitions. The map depicts from the Malaya Peninsula to southern Java and from Aceh (northwester Sumatra) to North Borneo. Singapore, at the southern tip of Malaya, takes center stage.

Japanese Ambitions in the East Indies

Following their successful seizures of the Malay Peninsula (1941), Singapore (1942), parts of Borneo (1941 - 42), Java (1942), and Sumatra (1942), the Japanese were firmly in control of the East Indies. This area, along with China and Oceania, was intended to be the trading and resource linchpin of the Greater East Asia Co-Prosperity Sphere, a Japanese dominated alliance of East Asian, Southeast Asian, East Indian, and Oceanic countries. The Japanese wasted little time. Within a year of their conquest, they dispatched their premier oil engineer, Ōmura Ichizō, to perform a detailed geological survey of the islands in order to determine potential drilling and mining sites.

The Greater East Asia Co-Prosperity Sphere (大東亜共栄圏) was an imperial concept created and promulgated for occupied Asian populations from 1940 through 1945 by the Empire of Japan. Announced by Hachirō Arita on June 29, 1940, the Co-Prosperity Sphere was intended as a self-sufficient 'bloc of Asian nations led by the Japanese and free of Western powers.' It covered Southeast Asia, Eastern China, Manchuria, Japan, the East India Islands, and parts of Oceania. The idea promoted the cultural and economic unity East Asians, Southeast Asians, and Oceanians with the underpinning assumption that Japan, which had never been conquered and was the only Asian national to fully modernize, was the 'Light of Asia.'

This map was compiled by the Japanese mining engineer Ōmura Ichizō (大村, 一蔵) and published in 1943 in Tokyo by Nihon Tōsei Chizu (日本統制地圖). We are aware of only one other example, which is housed in the National Diet Library, Japan.

Ōmura Ichizō (大村, 一蔵; February 15, 1884 - January 29, 1944) was a Japanese mining engineer active in Tokyo in the first half of the 20th century. Ōmura was born in Tottori Katahara 20th Mansion (now Katahara Town, Tottori City). He studied at the Tokyo Imperial Science University (Tokyo U.) graduating with a degree in Geology in 1907 (Meiji 40). His first work was with a graphite company in Shimonoseki but in 1912 (Meiji 45) he joined the Takara Oil Company in Nagaoka. He worked as an advisor to Karafuto Oil and later as director of Nippon Oil. In 1942, he became vice president of Teikoku Oil. Around this time, he also lectured at Kyushu Imperial University, Waseda University, and at Kyoto Science University. In addition to his geological work in the oil industry, he was admired as a great promoter of sports, particularly sumo wrestling and baseball, where he was active with several tournaments and championships. Ōmura died suddenly of a brain hemorrhage at just 59. Learn More...