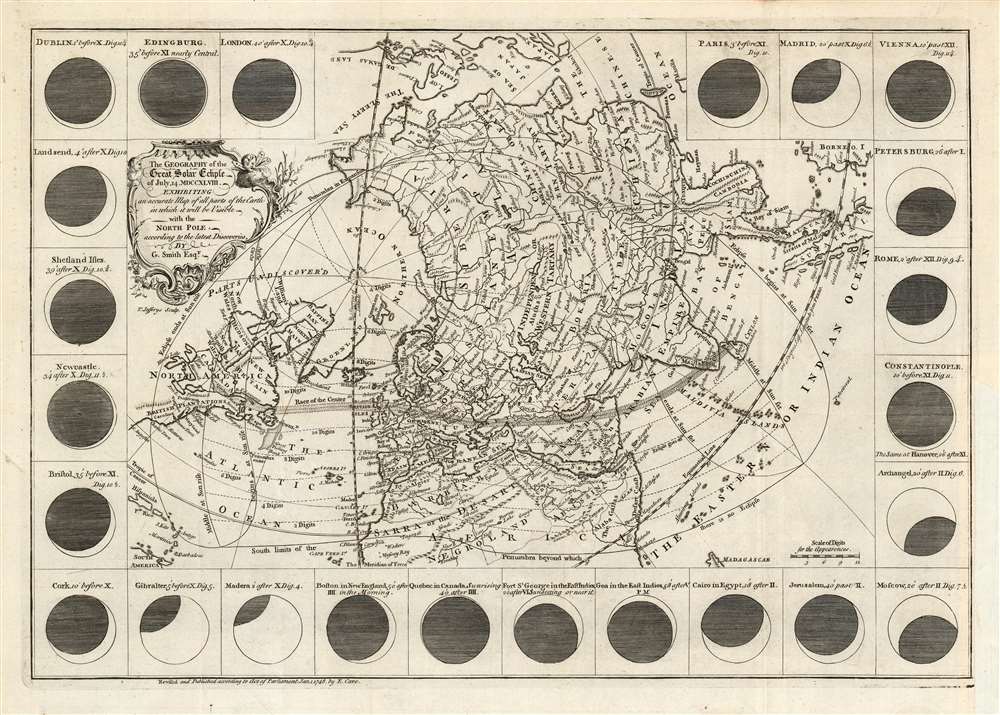 This elegant, 1748 north polar projection map was drawn by the English astronomer and writer George Smith and engraved by the great English mapmaker Thomas Jefferys. It was produced for inclusion in Smith's pamphlet describing and predicting the path of the July 14, 1748, solar eclipse. Twenty-four diagrams show the expected appearance of the eclipsed sun as viewed from different cities, and the map's notation shows both the areas from which partial or full eclipses might be seen. The map's polar projection is presented obliquely to show all the parts of the known world from which the eclipse would be visible. As a result, Smith and Jefferys provide a snapshot of the general state-of-the-art of geographical knowledge of the northernmost parts of the globe to be reached by Europeans, during a period in which the English were active in their attempts to navigate those waters.

In 1746, English geographical circles were embroiled in a bitter pamphlet war over the presence or absence of a northwest passage connecting to Hudson's Bay. Captain Middleton's naval expedition between 1741 and 1743 to Wager Bay proved that such a passage did not exist. But his disappointed patron Dobbs accused the honest captain with falsifying the results of his expedition and produced three members of Middleton's crew willing to perjure themselves that Wager Bay was, in fact, a strait. Dobbs, being politically powerful and wealthy, made sure that 'Wager Strait' appeared on several maps of the day, including this one. The possibility that such a passage might also exist via Baffin's Bay is suggested by the presence of several gaps in the coastline of William's Land in 'Parts Undiscover'd.'

Across a mostly landless Northern Ocean, the long Siberian coastline shows additional reference to extremely current geographical information. The eastern stretch of coastline leaps to its northernmost point at C. Sheleghinski,(Cape Shelagsky, or Мыс Шелагский.) This feature appears for the first time on the 1730 Strahlenberg map as Noss Tsalatskoi, though it likely did not pass directly to Jefferys via the Strahlenberg; his topography more closely resembles that which appears on the Strahlenberg derivative 1739 Homann Heirs Imperii Russici et Tatariae Universae tam majoris et Asiaticae quam minoris et Europae Tabula on which the placename also appears.

This map appeared in Smith's pamphlet entitled A dissertation on the general properties of eclipses: and particularly the ensuing eclipse of 1748 considered thro' all its periods, published by the London printer, editor and publisher Edward Cave. Cave produced the monumentally successful and influential Gentleman's Magazine, to which George Smith of Wigton was a regular contributor, writing on a blinding array of subjects. Cave had also begun to rely on Jefferys to engrave maps for the Gentleman's Magazine; his work begins to appear in 1746. The collaboration of these three figures in this map was a natural extension of their work in Gentleman's Magazine. Examples of this map also included in the January 1748 edition of that journal do appear.

George Smith of Wigton (d. 1773) was an English schoolmaster, astronomer and frequent contributor to Edward Cave’s Gentleman’s Magazine. His writings range from geology, medicine and antiquarian topics, but he made a special study of lunar motion and other astronomical subjects. He is best known for his 1744 Treatise of Comets and 1748 Dissertation on the General Properties of Eclipses.


Thomas Jefferys (1695 - November 20, 1771) was one of the most prominent and prolific map publishers and engravers of his day. Jefferys was born in Birmingham and was apprenticed to the engraver Emmanuel Bowen in 1735. Later, in the 1740s he engraved several maps for the popular periodical Gentleman's Magazine. Around 1740 Jefferys was finally able to go into business for himself and in 1746 received an appointment as 'Geographer to Fredrick, Prince of Wales,' which shortly after translated to the position of 'Royal Cartographer to King George III.' Jefferys initially specialized in compiling and re-engraving the works of earlier cartographers into more coherent cartographic wholes. Later, while not salaried position, Jefferys' appointment as 'Royal Cartographer' guaranteed preferential access to the most up to date cartographic material available, allowing him to produce new and updated charts of exceptional accuracy. He his best known for his maps of the Americas, particularly the posthumously published 1775 American Atlas, which included some of the finest and most important late colonial era maps of America ever made. Despite his prolific publishing history, royal appointments, and international publishing fame, Jefferys lived most of his life in dire economic straits. He was bailed out of bankruptcy by Robert Sayer during the production of the American Atlas. In the end, Jefferys died suddenly with very little to his name. Nonetheless, his cartographic legacy survived, and even after his death in 1771, many of his important maps continued to be published and republished by Sayer and Bennet, Conrad Lotter, Georges Louis Le Rouge, Laurie and Whittle, and others. Many attribute some of Jefferys best maps to the colorful and criminally inclined Irish cartographic genius Braddock Mead (John Green, c. 1688 - 1757), who is considered the 'secret behind Jefferys.' Jefferys was succeeded by his son, also Thomas, who had little success as a cartographer and eventually partnered with, then sold his stock and plates to William Faden - Jefferys' true heir.

Smith, George A dissertation on the general properties of eclipses: and particularly the ensuing eclipse of 1748 considered thro' all its periods,(London: E. Cave) 1748.