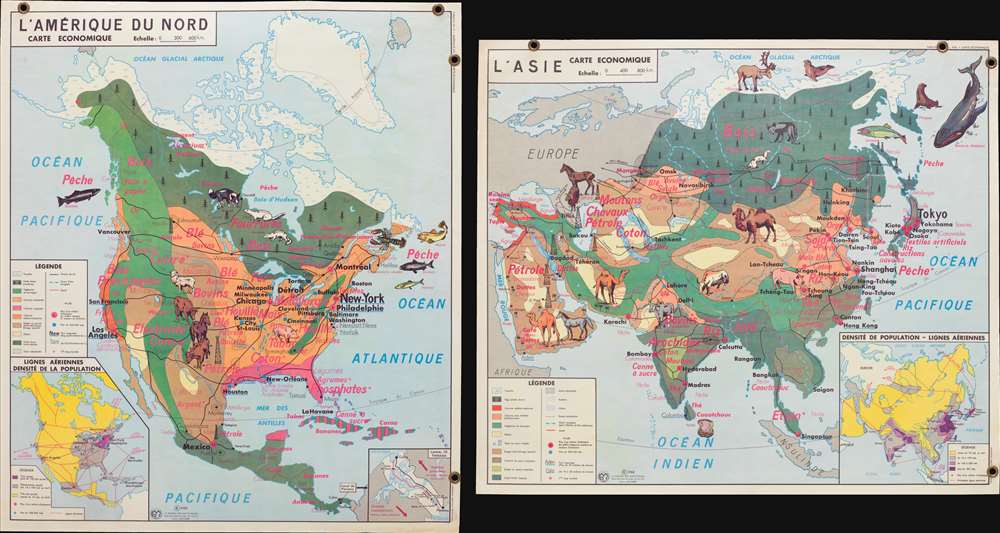 Illustrates the economic production of North America and Asia and identifies numerous industries.
$300.00

This is a 1960 Jean Anscombre double-sided pictorial map of the economic production of North America and Asia. The map depicts North America from the Pacific Ocean to the Atlantic Ocean and from the Arctic Ocean to northern South America and Asia from Europe and East Africa to the Pacific Ocean and from the Arctic Ocean to the Indian Ocean and Indonesia. Strikingly colored and illustrated, both maps use pinkish-red text to identify the various products created or raised in regional areas of each continent. Different sizes of font are used, along with varying degrees of a bold typeface, to emphasize the relative importance of certain products.

In North America, wheat (blé), cows, (bovins), and wood (bois) are produced in numerous different parts of the continent, whereas cotton (coton) and phosphates (phosphates) are focused in certain regions. Illustrations of livestock. Including cows, a horse, sheep, a pig, and several species of fish emphasize these industries. City names and highways are also included, as are inset maps illustrating air routes and population density and the Panama Canal Zone are situated along the bottom border.

The Asia map employs the same general concepts and aesthetic, with rice (riz), cotton (coton), tea (thé), sheep (moutons), and oil (pétrole) among the most common products. Illustrations of horses, camels, yak, and salmon highlight the livestock and other animals raised and caught in Asia. Cities throughout the region, including Tokyo, Yokohama, Beigina, Shanghai, Mumbai (Bombay) Karachi, Tehran, and Baghdad are identified. Just as on the North America map, an inset illustrating population density and air routes is situated in the lower right corner.

This map was created and published by Jean Anscombre and La Maison des Instituteurs in 1960 and printed by the Imprimeries Oberthur.

Jean Anscombre (fl. c. mid 20th century) was the director of the 'La Maison des Instituteurs' publishing firm that specialized in educational posters, books, and maps and was based in Saint-Gemain-en-Laye, France.

Very good. Laminated. Map of North America on one side map of Asia on the other. Four gommets present on map originally used for display purposes in classroom.
Looking for a high-resolution scan of this?